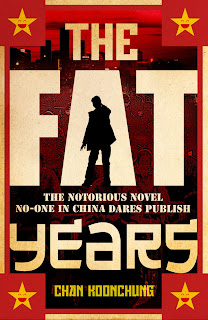 “THE FAT YEARS” Chan Koonchung (translated by Michael S. Duke) (Doubleday/Random House $39:99)
In the very near future, China has reached its Golden Age of Ascendancy. At a point of crisis, the American economy has collapsed and other Western economies have rapidly followed suit. But China has continued to prosper and stands on the verge of world economic hegemony. Soon China will have resumed the position it had before the rise of the West five hundred years ago. It will once again be the Earth’s most advanced nation, and a template for the world to emulate.
In the cities, China’s middle-classes live comfortably and enjoy life. The whole population is incredibly happy. China’s measurable happiness quotient is higher than that of any other nation. In fact it is suspiciously high. There is an element of brainlessness to it.
And that is what troubles the hero of Chan Koonchung’s The Fat Years, Old Chen, a novelist and sometime journalist. Not only is the population incredibly happy, but they appear to have completely forgotten the conditions of chaos that triggered China’s ascendancy. When Old Chen checks, he finds that no records, files or archives contain any reference to the one chaotic month he remembers so well. In fact, the month has been expunged from public and official memory. It never existed.
So Old Chen sets out to find what became of the missing month, and why nobody remembers it. And this is the wisp of plot upon which The Fat Years hangs its satirical and sometimes scary account of the direction in which China is heading.
Old Chen meets compromised Communist Party officials who know something is wrong, but prefer the comforts of conformity. He meets entrepreneurs and a high-class call-girl who are concerned only that prosperity continues and don’t want to ask questions. He meets a young man in the state bureaucracy whose notions of Chinese superiority amount to fanatical nationalism. He meets a few people like himself who remember the past, but are beginning to wonder whether this means they are having delusions. And when he moves to the country, he meets some of the disgruntled peasant masses, and even members of China’s large and growing underground Christian churches. He more clearly understands the big disparity between the Party’s official image of urban happiness and the continuing tensions of a vast, largely rural, nation.
The novel is not just a series of encounters. I don’t want to underrate Koonchung’s skills as a story-teller. There is a ‘thriller’ element to it as Old Chen probes the mystery of the missing month. This includes the clandestine manoeuvres of a tiny resistance movement, and eventually the kidnapping and interrogation of He Dongsheng, a high government official. But the aims of the novel are more didactic and satirical than they are sensational.
The Fat Years is a dystopia,  but a very immediate one. It is set just the day after tomorrow. In fact it was written in 2009 and is set in 2011. Shanghai-born Chan Koonchung has a Hong Kong background, but now chooses to live in Beijing. His novel is, of course, banned in China, but as Julia Lovell’s scholarly introduction to this translation makes clear, it is nevertheless widely and clandestinely circulated there. The translator Michael Duke’s endnote enlarges on these circumstances.
The novel has one unmissable thing in common with some famous dystopias. It ends with a long interview scene, in which the mystery of the missing month is explained and He Dongsheng gives to the hero the rationale for an oppressive government’s behaviour. This immediately put me in mind of Bernard having everything explained to him by the “World Controller” Mustapha Mond in Brave New World; or Winston Smith getting the state’s creed of brutality from O’Brien of the Inner Party in 1984. Koonchung specifically references such Western works in his novel.
More than anything, though, it is the satire that sustains it. Koonchung is taking current Chinese trends and extending them just a little. China is now a state-controlled market economy. The state is still officially Communist, but the Communist Party has long since abandoned anything like Maoist or Marxist precepts. As a party, its main aim is to hold on to power. It therefore resents any attempts to interrogate the past too closely, as they would compromise the party’s legitimacy. Not only are human rights disregarded, but the media and internet are supervised and censored. Much of the recent past may simply not be discussed. While some of the middle class prosper, they have to practise a collective amnesia.
This is the point of Koonchung’s “missing month”. To maintain the happiness of prosperity, wealthier Chinese must ignore Mao’s engineered famine in the late 1950s (the largest in world history), the chaos of the Cultural Revolution in the 1960s, the first crack-down after economic liberalisation in 1983 and the bigger crack-down against pro-democracy movements – with their demonstrations in Tienanmen Square – in 1989, not to mention the suppression of Falun Gong a decade ago. To discuss any of these things honestly would be to question the authority of a party that still claims a mandate from heaven.
The Fat Years references all these things explicitly, and takes aim at even edgier things. Koonchung invokes the spectre of home-grown Chinese fascism, growing out of the Communist Party itself in the nationalist fanaticism of its younger members. In this version, economic world hegemony is another terms for a new imperialism.
Posted by Nicholas Reid at 9:00 AM