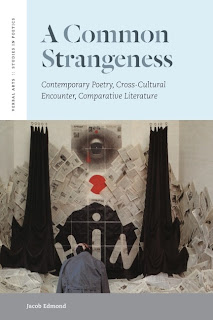 In the lives of poets, as in the lives of most other people, there has been a great change of consciousness worldwide over the last three or four decades. We have gone from a contest between capitalist West and communist East (with an ill-defined “third world” bending this way and that in the background); to the apparent dominance of capitalism and the market, even in officially “communist” China (with the rumblings of nationalist particularities in the background, especially in the Muslim world). We are also aware of how different cultural exchanges have become in the age of the internet, high-speed communication and a pervasive and internationally-marketed “pop culture”. With varying degrees of approval and disapproval, and with varying and competing definitions, terms like multiculturalism and globalism are now tossed around.

The debate over the “universality” of literature – including poetry – is not a new one, but it becomes more acute in this new global context. By definition, poetry is language, but languages are not universal. Traditionally, the universal was seen to be best expressed in the particular – hence, a poem “understood” worldwide was nevertheless rooted in a particular language and culture, and much of even the most “universal” poem was always untranslatable for those outside that particular language and culture.

How are poets, especially avant-garde poets, responding when they are now – like nearly everybody else – also wired in to an international ‘global’ culture?

Put crudely, this is what Jacob Edmond, of the University of Otago’s English programme, examines in A Common Strangeness, which is published by an American university press. The book’s concerns are spelled out in its subtitle Contemporary Poetry, Cross-Cultural Encounter, Comparative Literature. In his introduction, after noting the global socio-political changes between the 1970s and the collapse of the Soviet Union in 1991,  Edmond asks rhetorically:

“How have these economic and geopolitical events transformed the way we think about literature and culture on a global scale? How have avant-garde poets … and their readers… participated in and responded to these historic changes? What might their responses tell us about how we have come to understand our own era as both more global and more diverse? What might they reveal about the rhetorical and historical structures that produce these poles of sameness and difference? What is the history – and what is the poetry – of this common strangeness?” (Pg.2)

Edmond claims that, post-Cold War, there is no longer an assumed binary opposition between “them-and-us”, but a more trans-national and multicultural awareness, and this is reflected in the poets of the United States, post-Soviet Russia and China.

He notes that post-circa-1990, “building on the search for a poetics that traverses the boundaries of nation and culture, which had been a major driver of avant-garde  poetry for the past one hundred years,  many writers had a powerful if ill-defined dream of an imagined trans-national  poetic community whose shared sense of location was based paradoxically on dislocation.” (pg.6) They posited a new sort of consciousness and  “inter-subjectivity” where poets attempt to step into the shoes of others. And yet this condition was easier to conceptualise than to realise.

Jacob Edmond is apparently fluent in both Chinese and Russian. After the theoretical introduction, A Common Strangeness becomes six critical and reasoned case studies of six specific avant-garde poets, the Chinese Bei Dao and Yang Lian; the Russians Arkadii Dragomoshchenko and Dmitri Prigov; and the Americans Charles Bernstein and Lyn Hejinian. Much as I attempted to follow the theoretical and unifying thesis that runs through this densely-written and –referenced book, I found myself again and again drawn to the particularities of each poet whom Edmond considers.

It is fascinating to discover, for example, how Chinese poets used Charles Baudelaire’s poetics as a way of standing back from their society and viewing it with the distanced eye of Baudelaire’s flaneur (stroller; walker). Yang Lian was in Auckland at the time of crackdown in China in 1989. Edmond remarks “Yang’s exilic writing negotiates the temporal and physical disjunction of exile through the figure of the walker in the city.” (Pg.26). In his collection Unreal City, Yang’s poetry superimposes Auckland on Beijing (or Beijing on Auckland?), with that sense of being physically present but spiritually elsewhere that informs so much of Baudelaire’s Parisian verse. Appropriately, Edmond’s chapter on this poet ends under Grafton Bridge, at the memorial for those Chinese killed in 1989 crackdown.

When he considers Arkadii Dragomoshchenko, Edmond documents how this Russian poet was stimulated by his correspondence with the American Lyn Hejinian and out of this came his Sky of Correspondences, where the very word “correspondence” has a multiplicity of meanings. These include literal letters between individuals and the correspondence between languages; but also the correspondence of language to external reality and the symbol-and-association-fraught way every language functions. Once again there is an obvious Baudelaire referent, for Baudelaire’s sonnet Correspondances [together with Rimbaud’s “Je est un autre”] is one of the foundational texts of literary modernism.  Grappling with post-Soviet reality, says Edmond, “Dragomoshchenko’s poetics of co-response engages current theories of comparative literature by addressing what happens to the idea of comparison across languages and cultures when the notion of cultural unity, totality, or vertical correspondence to a universal ceases to be tenable” (Pg.48)

Not only does this suggest a world after the breakdown of a totalist ideology, but also a world bereft of God. Having broken with a “total” concept of the universe or of external reality, the poet goes for the fragmented individual encounter. Dare I say (even if Edmond doesn’t) that this is the spiritual moment when modernism slips into postmodernism?

Incidentally, the chapter on Dragomoshchenko is interesting not only for the poetics it explores, but for what it reveals of the aesthetic (and ideological) divisions within the “unofficial” literary movement in the late Soviet Union. Not all those who reacted against Soviet officialdom reacted in the same way, and Dragomoshchenko was a often a gadfly even to his fellow dissidents.

Lyn Hejinian, the American poet who corresponded with Dragomoshchenko, is seen first as one of the American “Language” school of poets i.e. those who were happy to be influenced by “formalism” and to attempt to avoid naïve lyrical self-expression by examining the nature of language itself. They confronted the way the world is in effect structured by language. She immersed herself in Russia culture and made repeated attempts to show how languages work [or don’t work] in translation. Of one of her collections, Jacob Edmond remarks “Even her apparently more personal work My Life…. Focuses more on the language that makes up a life, than it does on the phenomenology of being a person. Hejinian’s increasing tendency to link estrangement to her notion of the person can be attributed at least partly to her contact with Russia.” (Pg.85) The autobiographical element here is Hejinian’s “estrangement” in finding herself in a country where she did not speak the language and hence, in gradually learning Russian, she gradually re-made herself as a person. Of her “short Russian novel” Oxota, Edmond  comments that she “aims to overcome predetermined structures for experience, such as the essential self, to restore perception of words and the world” (pg.91). Edmond does, however, raise the interesting possibility that Hejinian may have unwittingly romanticised Russian collective identity – the “Russian soul” – in contrast with Western individualism.

If I read Jacob Edmond’s argument aright, when he deals with Bei Dao he is suggesting that, whereas this Chinese poet may have in some ways worked against the officially-imposed constraints upon Chinese literature, this does not necessarily mean that his poems are the template for a homeless “world” literature, or that they are truly universal and hence independent of the specific language that they use. Having raised the question of my own comprehension, I would also say that his chapter is the most accessible and raises the whole question of how anything can be truly “universal” if it does not also inhabit a specific home.

For me the most problematic and troubling chapter was that on Dmitri Prigov, the Russian conceptualist artist and poet whose work often depends on iteration, endless reproductions of canonical Russian texts and objects and (in his earlier work) the figure of the “Policeman” – at once ironical AND a celebration of Russian culture vis-à-vis the rest of the world. In his Soviet-era poems, Prigov imitated, in order to mock, grandiose Soviet nationalism and Soviet attempts at cultural hegemony. But as soon as the USSR collapsed, he mocked equally samizdat culture and its techniques. He gradually came to a renunciation of poetry in the face of triumphant pop culture.
Why does this trouble me? Because it really rejects a place for poetry at all and – in spite of all the articulated theory – also seems to reject the place for the individual voice, be it affirmative or dissident. (For me, submitting to pop culture is akin to the triumph of dullness at the end of Pope’s Dunciad. Accusations of “elitism” be damned. The only literary culture worth having has to define itself against the mass – a rebours!) Incidentally, Edmond does not say it, but nearly all the examples he quotes of Prigov’s works seem the most playful of dadaism.

Finally there is the American Charles Bernstein. Edmond notes that  “addressing the changes wrought between the late-Cold War era and the post-9/11 world, [Bernstein’s] work stages the interplay between political statement and poetic diversion.” [pg.165]. This would suggest that Bernstein’s tone is mainly satirical and responsive to externalities as opposed to the reified consciousness.  I would argue that, with its reconsideration of Bernstein’s reconsideration of Ezra Pound’s poetics and ideology, this Bernstein chapter is the most ideologically fruitful in the book – or at least the most ideologically coherent for this reader who is versed in neither Chinese nor Russian. Jacob Edmond moots such matters as multiculturalism being potentially a code for (Western) cultural hegemony over other cultures; or multiculturalism as simply the cultural arm of economic globalism.

As you can see, I have followed my familiar defensive route of giving you a summary of this book’s contents with only the occasional evaluative comment. Like most of the book’s potential readers, I am at a great disadvantage in reading A Common Strangeness, because, unlike the author, I cannot read the writings of four of its six poets in the original. Naturally, Edmond does supply English-language translations of the cited Russian and Chinese texts, but there is still that niggling sense that we are not able to follow the author in all the connections and interpretations he is able to make.

Perhaps it is redundant to say that this academic book is not one for non-specialists and certainly not one for those uninterested in poetry. To put it simply, it is a very “hard read”, assuming of the reader an acquaintance with literary theory and its specialist jargon; and assuming, too, an ability to negotiate long sentences with many subordinate and dependent clauses. I do not note this as a form of negative criticism. I simply note it.

A Common Strangeness is a work of real and very wide scholarship. Many of its longer end-notes are in themselves the length of independent essays. Its bibliography is extensive. Although much of its frame of reference was unfamiliar to me, I nevertheless found its arguments about particular and ‘global’ literary cultures, about the old concept of ‘world literature’, about cultural hegemony and about pop culture all fruitful and interesting. But, as always, I found comments on the [six] individual poets more illuminating than the framework. Perhaps the universal does best inhabit the particular.

Email ThisBlogThis!Share to TwitterShare to FacebookShare to Pinterest
Labels: A COMMON STRANGENESS, Jacob Edmond, Something New