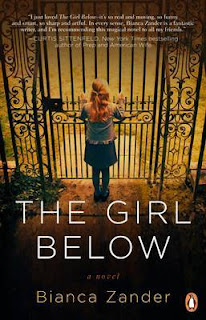 “THE GIRL BELOW” by Bianca Zander (Penguin, $NZ30)

In The Girl Below, English-born, Auckland-resident Bianca Zander has written a lively, eventful, readable and entertaining novel. But it is also her first novel, and as such it suffers from that first novel ailment of trying to say everything the author has to say – the grand “getting it off her chest” of the first-time novelist. To put it another way, this is a novel that loses its focus somewhat as it tries to be too many things at once.

And yet it is too good a piece of story-telling not to read to the end.

The basic set-up is this – Suki Piper, at the age of twenty-eight, returns to London after living in New Zealand for ten years. She came to New Zealand at the age of eighteen when her Mum died of cancer. Why she chose New Zealand in the first place is revealed only well into the novel and I’m not in the business of providing spoilers here. Now back in London she has two things on her mind. First, to find a paying job. Second, to revisit the haunts of her childhood and adolescence, and work out the origin and meaning of a number of childhood memories. Main haunt is the decrepit building where she grew up in a basement flat and was therefore “the girl below” to the disorderly family who still own the building.

Suki’s failure to find a job leads her to doss with various friends as she keeps searching. But they soon get sick of her and turf her out. Needing somewhere to stay, she accepts the offer from Pippa, daughter of her late parents’ landlords, to look after members of Pippa’s family. They are the aged, eccentric, theatrical Peggy and the grumpy teenager Caleb. Charged with this duty, Suki finds herself living exactly where she grew up, and she begins to replay in her head unpleasant or unsettling events from her childhood.

There’s the baleful presence of a statue that gave her the willies when she was a kid. There are half-remembered impressions of a drunken party her parents threw when she was about seven or eight, and the mystery of what exactly those naked grown-ups were doing in the bathroom. There was the time her Dad finally walked out on her Mum (with rather strained symbolism, it was at the same time that the child Suki discovered Santa Claus didn’t exist). Above all, there was something awful that happened in the deep, damp, cold air-raid shelter at the back of the garden.  These things niggle in her mind as she copes with the odd and demanding family into whose bosom she has been thrust.

Narrated in the first-person by Suki, chapters cut between 2003, when Suki is twenty-eight, and the 1980s and 1990s, when she was a growing child, adolescent and young adult in London and Auckland. Bit by bit her circumstances are revealed, as are the causes of her unease.

In the opening chapters, Zander is excellent at presenting that sense of dislocation people get when they go back to the places of their childhood. For Suki, London is grubbier and less glamorous than she remembered it and there is the desperation of being unemployed. But her mind still runs on the assumption that things will be as she remembers them. Thus when she goes to meet an old friend for the first time in years:

“By the time I got to Old Street to meet Alana, I was a dishevelled wreck but bang on time. In the station foyer, I eagerly scanned the thousands of surging commuters for a wistful schoolgirl in grey skirt, blazer and pumps, her long hair swept artfully to one side. I was still scanning when a sharp-suited woman with a blunt, practical bob approached me and said ‘Suki, is that you?’ ” [Pg.53]

The milieu of cramped flats and of the over-stuffed, decaying house of Suki’s host family is presented vividly. So are the supporting cast. Caleb is the epitome of the surly, self-centred teenager and old Peggy is an almost Dickensian figure with her forgetfulness and her cunning and her delusions of having once been a great actress.

In the flashbacks to childhood and adolescence, Zander is also good at picking up on both the powerlessness children experience, and the angst of teenagers who are trying hard to keep up socially with their classmates. There is that sense that, for many adolescents, matching up with somebody of the opposite sex is an awful duty for the sake of social appearances, rather than a real pleasure. Of her teenage self, the young adult Suki comments:

“Having a boy friend felt more like homework, a thing to get through and endure rather than the state of nirvana I had imagined. Most of the time Leon was there, I daydreamed about being by myself. I wondered if other girls felt the same way, or if I had just picked a dud.” [Pg.115]

With all this to its credit, however – the lively set-up, the sharp observation, the neat sense of contrast between past and present, New Zealand and London – this is still a novel that loses its focus at a certain point. At times, Suki’s musings on males drop into “chick lit” territory and, in some of the flashbacks, she comes through as a bit of an airhead as she dives into drugs and booze and often does and says things that may be convenient to keep the plot rolling but that are unlikely even from an artless person. Late in the novel, we have the adult Suki engaging in some rather inappropriate fumbling with a teenager, which reinforces the impression of her air-headedness. Then – again late in the novel – there is the tourist trip to Greece, which takes us off onto all sorts of tangents before the novel’s issues are resolved.

Most perplexing, though, is the supernatural element of The Girl Below.

The novel’s blurb has the young novelist Sarah Laing praising it as “combining gritty coming-of-age realism with time-travelling weirdness.” Well, yes indeed it does, but I think this is a real problem. I am not saying that Bianca Zander cheats in any way. There are indications quite early in the novel that it will include uncanny, non-naturalistic elements. But the general tone of the novel is so matter-of-fact, worldly and realistic that the supernatural bits – and especially the way they contribute to the conclusion – seem jarring. I wish Suki’s perplexities had been solved without the aid of mystic dreams, a numinous token and a virtual ghost.
Posted by Nicholas Reid at 9:02 AM

Email ThisBlogThis!Share to TwitterShare to FacebookShare to Pinterest
Labels: Bianca Zander, Something New, THE GIRL BELOW