Nicholas Reid reflects in essay form on general matters and ideas related to literature, history, popular culture and the arts, or just life in general. You are free to agree or disagree with him.
YOU WILL APPRECIATE THIS PAINTING AS YOU ARE TOLD TO

It doesn’t keep me awake at night, but I am sometimes put out by the way modern art galleries often feel obliged to hector viewers about how they are meant to respond to paintings. Placards and notices don’t just identify who the painter was, when the painting was painted and what its inspiration was. They also wish to correct any erroneous or heretical thoughts we might have about the painting.
I am put in the way of these thoughts by what we are now told to believe about a particular painting. Louis J. Steele’s and Charles Goldie’s 1898 painting The Arrival of the Maoris hangs in the Auckland City Art Gallery, where I have viewed it many times since I was a child. It is often acknowledged to be New Zealand’s most famous “historical” painting and it has been reproduced innumerable times as a book illustration or as a book cover. 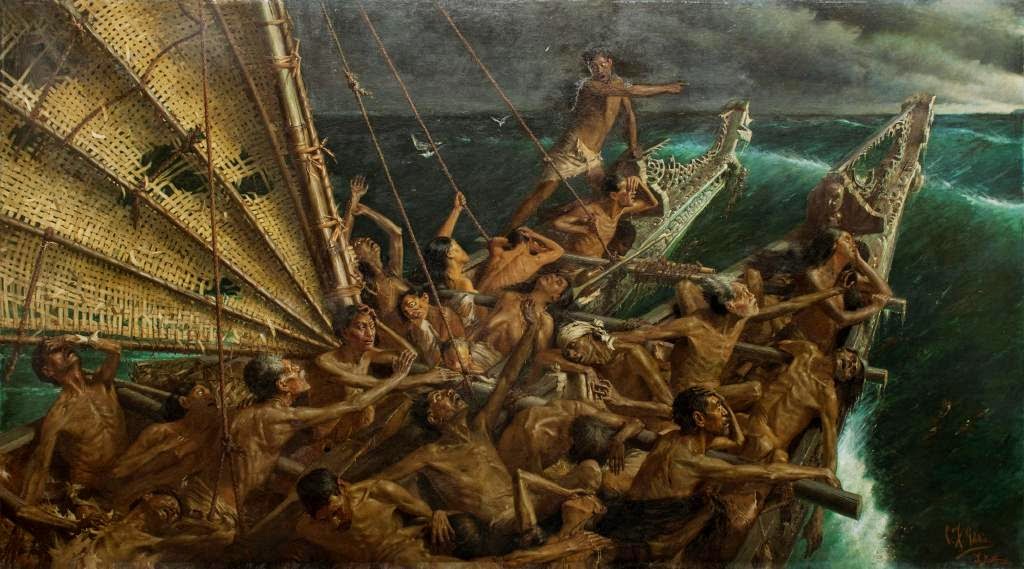 But of course it is not “historical” at all.
How Maori first arrived in this country is a matter of informed speculation, not of verifiable historical fact. The anthropological and historical consensus now suggests planned settlement from other parts of the Pacific some time in the 13th century, after earlier voyages of exploration following ocean currents and guided by the stars. But Steele’s and Goldie’s painting, with its wide-eyed, emaciated Maori being driven crazy with hunger, suggests the notion of their arrival in New Zealand as an accident, not as a planned and organised migration. It could even be said to play to the earlier (and no-longer-countenanced) European notion that Maori arrived only after having been inadvertently driven out to sea, from their islands of origin, by storms. The art gallery’s official website now calls the painting a “romantic fabrication” and notes that the type of waka depicted in the painting didn’t develop until hundreds of years after Maori were settled in the new country.
So far, so unexceptionable, I suppose, although I do rebelliously mutter that nearly all “historical” paintings of the nineteenth century are equally “romantic fabrications” and the eagerness to single this one out suggests the curators’ dread that they might otherwise be thought to endorse the type of errors the painting encourages.
My hackles really rise, however, when both the gallery placard and the website suggest that Steele and Goldie simply copied and plagiarised Theodore Gericault’s 1819 painting The Raft of the Medusa. Both Steele and Goldie studied in Paris and both of them had seen and made copies of Gericault’s masterpiece, which depicts the aftermath of a notorious shipwreck with both corpses and the living drifting helplessly at sea. 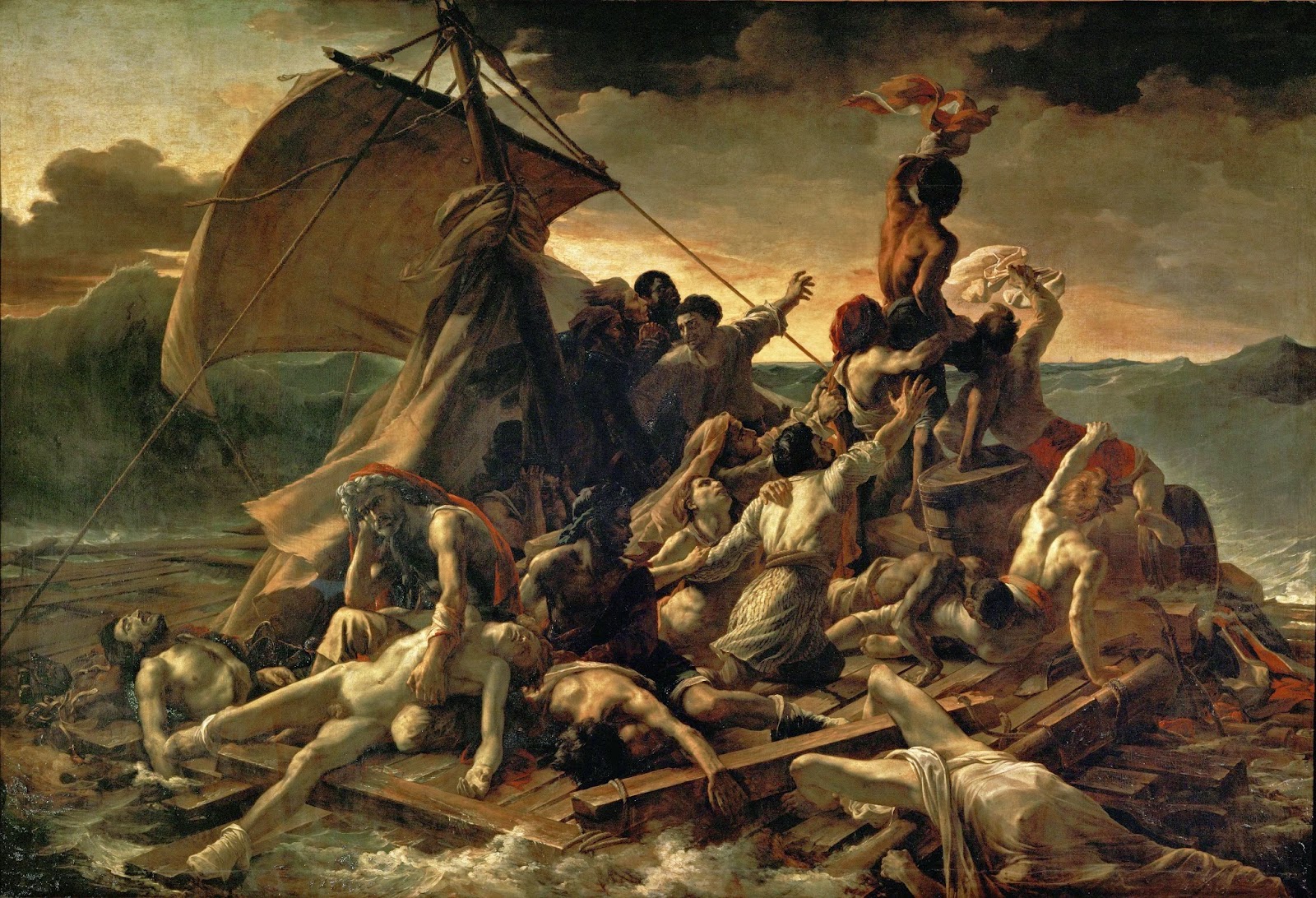 There is no doubt at all that Goldie and Steele were influenced by Gericault’s painting. (Incidentally, the Gericault painting is many times larger than Steele and Goldie’s painting, as I can confirm after viewing it in the Louvre earlier this year.) As well as their kinship of subject matter (desperate people at sea), both The Raft of the Medusa and The Arrival of the Maoris are designed along a diagonal axis, rising from left to right, capped by a figure signalling to something on the right hand side of the frame – a distant sail in The Raft of the Medusa and the distant coast of New Zealand in The Arrival of the Maoris. In both, a sail billows on the left hand side of the frame. So Goldie and Steele took a major part of their conception from Gericault.
And yet they are two quite distinct paintings.
Goldie and Steele were strongly influenced by, but they did not merely copy, Gericault. The tonal values of the two paintings are quite different. The skeletal bodies of the Maori voyagers bear little relationship to Gericault’s more muscular figures. To see the one painting merely as a copy of the other is to miss what is unique about each.
There is something else that niggles at me in the way we are now asked to respond to The Arrival of the Maoris. It is quite conceivable that first Maori settlement of New Zealand was orderly, planned and methodical, and that voyagers were well supplied with provisions and knew no hunger en route (“conceivable”, but of course not provable). It is conceivable that this land’s first discoverers undertook their voyages in a calm, rational, scientific spirit. And yet I find it hard to believe that there would not have been an element of fear and terror in setting off into vast and unknown seas on such small craft, and not being sure that the goal would actually be reached. No matter how much of a “fabrication” it may be, The Arrival of the Maoris does at least dramatise this terror, which seems to have been rationalised or wished away in more “correct” narratives determined to show that Maori did not merely blunder into this country.
I have not thought about this matter only in the last few minutes. Some time ago I wrote a poem drawn from viewings of Steele’s and Goldie’s painting – and my reaction to current wisdom thereupon. The poem appears in the November 2014 issue of Broadsheet – New New Zealand Poetry.
Here it is:

Enlightened story of the swaying raft
that gripped an ocean current for a drift
left-side of sunset, south-west by the stars
until the clouds and sea-birds spoke of cliffs.

No accidental voyage but the work
of priestly forethought,  founded on the spheres,
roots under rushes, hooks to trail for fish
and chanted prayers to make grey waves a bridge.

This is the story that the placard tells,
denying mad starvation and the sweat
of storm-forced sailors, lost,  Medusa-like,
in oceans of ungovernable salt.

True tale, perhaps, and mild: mystery shot out
to calm us with the certainty of plans.
There is no awe in oceans, just a route
as routine as timetabled train or bus,

no bound hulls creaking, no coarse woven sails,
no angry white-caps and no hunger groans,
no sharks as scavengers, no ache for home,
no sailors spitting fear of the unknown.
Posted by Unknown at 9:00 AM

Email ThisBlogThis!Share to TwitterShare to FacebookShare to Pinterest
Labels: Something Thoughtful, You Will Appreciate This Painting As You Are Told To