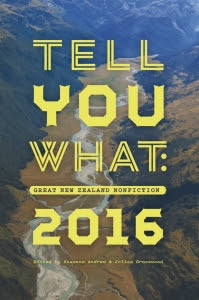 “Great New Zealand Nonfiction” says the subtitle, and I begin curling and uncurling my toes excitedly. When I reviewed Tell YouWhat: 2015 on this blog earlier this year, I wasn’t sure if it would indeed become the annual that it promised to be. Now that the volume labelled Tell You What: 2016 has come out (with the same subtitle) I feel more confident that this has now established itself as an annual event.  The two Auckland editors, Susanna Andrew and Jolisa Gracewood, have once again searched blog, website, magazine and learned journal for what they regard as the best New Zealand nonfiction of the year, although that term “nonfiction” is somewhat flexible, given that a few of the pieces included are decorated with fictional trimmings. There are 23 pieces this time – a few of them very brief, but with a higher proportion nearly hitting the 20-page mark than was the case last time. 12 women and 11 men are represented, so once again it’s scrupulously gender-equitable.
It is a good, stimulating and varied read, but anthologies of this sort are always like a box of chocolates. No reader will like all the flavours or respond to them all in the same way. 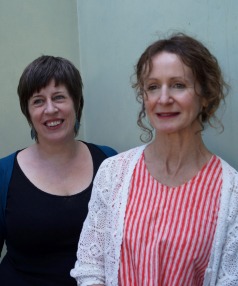 Email ThisBlogThis!Share to TwitterShare to FacebookShare to Pinterest
Labels: Jolisa Gracewood, Something New, Susanna Andrew, Tell You What 2016