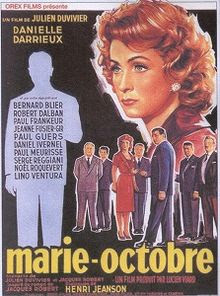 We sit down to watch an old French film made in 1959. Julien Duvivier’s Marie Octobre. It’s no great shakes, but we enjoy it. “Marie Octobre” is the wartime code-name of a woman who was in a cell of resisters in occupied France during the Second World War. But she has recently learned that the beloved leader of the resisitance cell was dobbed in to the Gestapo by some other member of the cell.
So now, 14 years after the war, she summons to her chateau the other nine members of the cell. They think they are coming for a reunion dinner, but after some preliminary chat she makes it clear what her purpose is. She wishes to expose the traitor.
Was it the priest who (before he took holy orders) was in love with Marie and jealous of the admired resistance chief whom she loved? Or was it the butcher who did business deals with the occupying forces? Or was it the lawyer who was a Fascist in the 1930s, even if he turned against the Nazis when they violated the conditions of their armistice with France in 1942? Or was it the publisher who suddenly became rich just before the war ended? Or was it….? 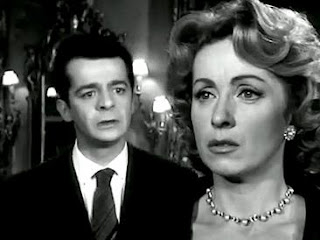 Okay, one quickly recognizes what sort of film this is. We are about a quarter way in when we begin making remarks on how this seems the nearest thing a French film has ever come to being the classic Agatha Christie-type country-house whodunnit. The suspects are lined up in the large and sumptuous drawing room and the spotlight is turned on each, one after the other, until the identity of the guilty party is at last revealed.
Playing “Marie Octobre”, Danielle Darrieux, one of France’s biggest film stars, has the mature beauty of a woman then in her early ‘40s. Really the essence of chic. She is surrounded by many of France’s best character actors – Bernard Blier, Paul Guers, those two Franco-Italian stars Serge Reggiani and Lino Ventura and others. There is a maid who wanders in and out of a few scenes, but really Danielle Darrieux and nine men are the whole show. The camera often groups the men around her, emphasising that she is the queen bee and the star attraction. Indeed the camera sometimes lines up the characters as if they are appearing on the stage. The film is sometimes like the dreaded “canned theatre” although, as it happens, it was not based on a stage play. 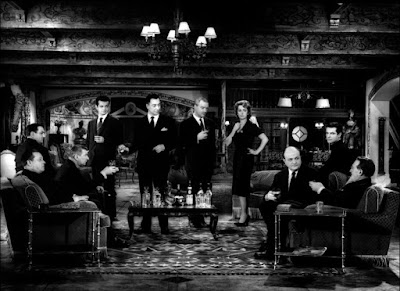 Given this cast and given this director, this was clearly a “prestige” film of its year. But it was made in a style that even then was regarded as theatrical and old hat – not to mention the highly formulaic nature of its script. So when it was released, and despite being a popular hit in France, it drew a chorus of raspberries from most reviewers. I have accessed a 1959 review of the film by Bosley Crowther in the New York Times, where he dismisses the film with a yawn. I note that in his film guide, Leslie Halliwell awards it no stars and describes it as a “stultifying one-set talkfest”. French reviewers were just as unimpressed in 1959.
And this is the point of my little sermon this week.
1959 was also when the younger nouvelle vague (new wave) directors were beginning to flex their muscles. Julien Duvivier had been at his peak as a director in the 1930s, when he came up with such classics as Pepe Le Moko and Un Carnet de Bal. Along with Jean Renoir, Marcel Carne, Rene Clair and Jacques Feyder, he was regarded as one of France’s greatest directors. But twenty years later, the bright young cineastes of Cahiers du Cinema were denouncing him and his peers as belonging to “le cinema de papa” (“Dad’s cinema”) and producing films that were out-of-touch, old-fashioned and stultifying. The era of Francois Truffaut, Jean-Luc Godard, Jean-Pierre Melville, Claude Chabrol and others was dawning. In 1959 Francois Truffaut’s moving study of a lost youth Les Quatre Cent Coups (The 400 Blows) was shown at the Cannes film festival and Truffaut was awarded the gong for best director. (Ironically, Duvivier was on the jury that awarded Truffaut the gong.) So how could Duvivier’s old-fashioned formulaic movie compete in the critics’ eyes?
And yet, mes amis, here is my point.
57 years after Les Quatre Cent Coups, the nouvelle vague is itself old hat.
I ask you to look now, with a dispassionate eye, at the likes of Jules et Jim (Truffaut), Le Mepris (Godard), Le Beau Serge (Chabrol) and other films of that era. You might feel a twinge of nostalgia for them, and even enjoy the skill of their making. They are not rubbish. But you have to admit that their world-view is now antique. They are as dated as “le cinema de papa”, which their makers derided.
This is the inevitable swipe of time, of course. Everything dates. But the poiint is that the techniques of Duvivier, Renoir, Carne, Clair and Feyder now look no more dated to us than those of Truffaut, Godard, Melville and early Chabrol. Inded in some respects the techniques of the latter bunch (over-lapping dialogue, hand-held cameras etc.) are now more the clichés of film; and the stately pacing of the former bunch is more welcome.
And here’s this final kicker. I look up more recent French reviews of Duvivier’s Marie Octobre – reviews tied to VHS and DVD releases of the film – and I find that it has been widely reassessed by French critics as a skilful piece of movie-making, with Duvivier’s use camera now likened to the long takes that Hitchcock used in his Rope. French reviewers mean it as a compliment when they compare it with Rene Clair’s 1945 film version of Agatha Christie’s And Then There Were None (which the French still tactlessly call by its original title, Dix Petits Negres). Clair, like Duvivier, was a refugee in Hollywood during the Second World War. For the record, Marie Octobre has been re-filmed more recently, and adapted for the stage, where it is apparently a frequent crowd-pleaser in French repertory theatre.
Does this mean the original film is a great film?
Um – no. It’s a competent and entertaining example of a formulaic genre. No more nor less. But it’s only as dated as the movies by younger directors that were made at the same time. 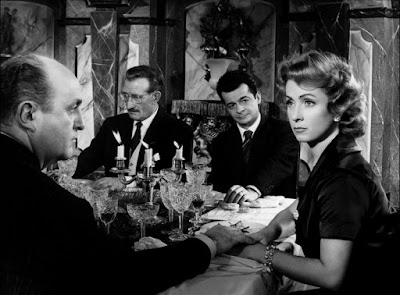