Nicholas Reid reflects in essay form on general matters and ideas related to literature, history, popular culture and the arts, or just life in general. You are free to agree or disagree with him.
VIRTUE SIGNALLING 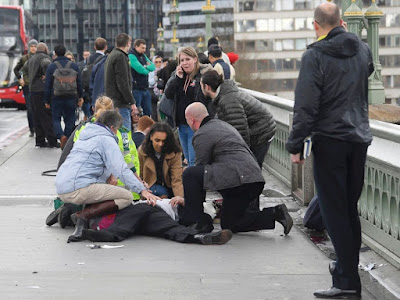 People are killed in what could be a lone-wolf terrorist attack on Westminster Bridge near the Houses of Parliament. A total of five people die. This includes the man who drove his car into pedestrians and attacked a police officer with a knife before police shot him dead. Of course the whole event is placed at the top of the TV news. Understandably – especially when there is a moving tribute in the House of Commons from an MP who was a personal friend of the policeman who was killed. Who would not be moved by the detail of the woman jumping into the Thames to escape the terrorist’s attack? And yes, it was sad that among the victims were a mother on her way to pick up her kids and an American couple who were in London to celebrate their wedding anniversary.
But then the funny stuff begins on Facebook.
There are one or two dissenters, adopting the line that these events are inflated by our news media only because they happened in a European capital. “What about the hundreds dying in Syria every day?” say the dissenters.
But they are a tiny minority on the monster that is social media.
Overwhelmingly on social media the horrible phenomenon of “virtue signalling” begins.
“We Stand with London 22/03/2017. PLEASE SHARE”, says one bold post, with a stark black-and-white image of the main sights of London. So viewers are invited to pass the message on to show that they are considerate and compassionate people. Pictures are posted of Westminster Bridge, with remembrance candles on it. Facebookers hurry to add messages about how heart-stricken they are, how they were on Westminster Bridge just a few days before the attack, how their hearts go out to Londoners.
But what is the point of this? Is it a way of cuing us to feel sorrow or repugnance, just in case we don’t feel these things on hearing the news reports anyway? Is it really like laugh tracks in old sitcoms, inciting audiences to respond to jokes in case they didn’t realize they were jokes in the first place? Is it mentally pinching ourselves to register that some things are morally wrong?
This is “virtue signalling”.
The essential fact about Facebook and other social media is that they are lived in the public eye. To post something on Facebook is a way of saying “Me! Me! Look at me!”  It is self-advertisement.
I refuse to be hypocritical about this. I frequently use Facebook for self-advertisement – drawing attention to this blog, for example, or posting photos of trips and family events.
But virtue signalling is a more insidious beast. It is is a way of saying to the broad public “Me! Me! Look at me! Look at at how compassionate I am! See how virtuous I am!”
A law of diminishing returns is inevitably attached to the phenomenon. Remember when there were terrorist attacks in Paris a few years ago? Everybody poured out with “Je suis Charlie Hebdo” and other slogans on Facebook, or urged us to cover our site ID photos with a tricolour. Who remembers it now? How long did this deep-felt compassion last? If compassion is a matter of hitting a “Like” button on Facebook or “sharing”, then it’s not compassion at all and it quickly evaporates.
Once upon a time, people in distress over public events would have attended memorial services or said prayers for the dead. This at least took some sort of commitment. Now, in the absence of widespread religious observance, we are left with Facebook. And with visiting pop stars (there was one in Auckland at the time of the London attack) stopping their concert for a few moments to say how sad they were about the London event, to the audience’s great approval and to the boosting of the pop star’s profile as a compassionate person.
Posted by Nicholas Reid at 9:00 AM

Email ThisBlogThis!Share to TwitterShare to FacebookShare to Pinterest
Labels: Something Thoughtful, Virtue Signalling