If you are interested in such things, you might recall that a couple of postings back, in the diatribe The More ThingsChange, I quoted a passage from Matthew Kneale’s Rome, A History in Seven Sackings (2017), which I had recently reviewed for the NZ Listener. I do not think that Kneale’s is a particularly profound or wise book, but I happened to find in it another passage that resonated with me. It goes like this:


“These days, unless it is in the depths of the off season or you don’t mind spending a few hours in a queue, it is best to book a visit to the Vatican Museums online. Even then it can be a trying business that may feel less like a cultural feast than a trip to the sales. Artworks are lost behind huge tour groups, selfie sticks and guides batons brandished above them. Doors create bottlenecks where guards endlessly murmur, ‘Don’t stop, keep moving.’ The worst spot, unsurprisingly, is the most popular: the Sistine Chapel. As you enter, guards call out, ‘Silence’, ‘No photographs’, and direct you to join the crush that fills the room, of people staring upwards, holding audio-guides to their heads, or listening to tour leaders through earphones.” (p.155)


Yes indeed. Visiting some of the glories of Italian art, this has often been my own experience. But not exclusively.


Here is an account of the three times I have set foot in the Sistine Chapel.


The first time was in the early 1960s, when I was a little boy on a tour of Europe with my parents and three of my siblings. As I recall it, we entered the hallowed chapel easily and there were few people there. One has to remember that the early 1960s were before crowds of tourists flooded Europe, thanks to cheap air fares. In those days, visitors from New Zealand travelled to Europe (as we did) by ship. So here we were in the chapel with few other people to bother us. The guard didn’t mind that Dad lay down on a bench to be able to look at Michaelangelo’s ceiling without straining his neck. Was he carried away by this great work of art? We don’t know. What we do know, and what we remembered most from the visit, was that within a few moments of his lying down, distinct sounds of snoring were coming from Dad. We couldn’t blame him, really. After all, he’d just spent hours driving from Florence in a car with six people in it – including four squabbling kids -  and with a caravan being towed behind. But it did put into perspective the reverence with which one is supposed to contemplate great art.


The second time I was in the Sistine Chapel was in 2002. I had come to Rome to research a book and it was very definitely in the depths of the off season. February to be precise, and still winter. So my visit was once again unencumbered by many other people. As I was regularly reporting home, I literally counted how many people were sharing the space with me. There were eleven of them and, like me, they were all able to walk in a leisurely way from treasure to treasure and consider each in detail – not just the ceiling and the Creation of Man and all the others panels; not just the vast image of the Last Judgment at one end of the chapel; but also the side-panels and images from the New Testament that were painted by other artists. It was a time for real reflection in the quietness.

But my third visit to the Sistine Chapel was quite different. It was 2004 and my wife and I had gone to Italy for the wedding of one of our sons, who was marrying an Italian lady. It was springtime and the tourist season was well underway – but, despite the advice Kneale gives in the quotation above, we had not thought to book ahead for the many cultural sites we intended to visit. So when we got to the Sistine Chapel there was a long, slow-moving queue. And when we entered into the chapel it was wall-to-wall tourist, making it impossible to move about freely. People were packed in so tightly that had anyone fainted, (s)he would have remained standing. We could look up at the ceiling and we could look at the Last Judgment from afar, but there was no possibility of moving about freely and, without being jostled and carried on by the throng, there was no possibility of examining the art in a calm, contemplative fashion. The mania of the selfie-stick had not yet plagued the world; but otherwise the scene was very much as Kneale paints it.


I’ve mentioned on earlier postings the crush and shoving that there always is around canonical works of art that have been oversold to tourists - the Mona Lisa in the Louvre, for example. (See my earlier posting How We Really Experience Art Galleries). I should also note that on my 2002 and 2004 visits to Italy, I had the same experiences in Florence as I had in Rome – easily breezing into an under-populated Uffizi in the off-season in 2002, but facing a crushing mob in the tourist season in 2004. (Indeed in the latter case, where we hadn’t booked ahead, we were able to enter the Uffizi only because a generous American tourist handed over to us tickets she couldn’t use, because of a sudden familiy emergency.)


So there are two pieces of advice if you intend to visit the august galleries of Europe. (A.) Always go in the off-season; or (B.) Be prepared to be pushed, shoved, and probably disappointed. 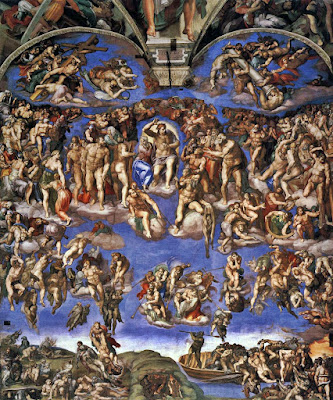