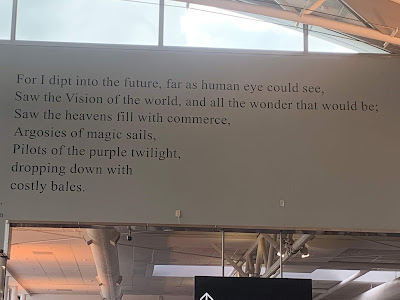 Recently I said farewell at Auckland International Airport to somebody who was leaving on a long journey overseas. It was a touching moment for those of us who were saying goodbye. But – as you will know from your own airport experiences – there are always those awkward moments where the farewell party stand around idly while waiting for the traveller to turn up, and then waiting for the traveller to check in luggage.
And it was in such an awkward, idle moment that my eyes strayed up, as they often do when I visit this airport, to a quotation from Tennyson’s “Locksley Hall” emblazoned on one wall. It reads thus:
For I dipt into the future, far as human eye could see,
Saw the Vision of the world, and all the wonder that would be;

Saw the heavens fill with commerce, argosies of magic sails,
Pilots of the purple twilight dropping down with costly bales.

The quotation’s relevance to an airport is obvious. Even if Tennyson probably conceived of them as some sort of balloon or airship, here’s a vision of flying vehicles carrying precious cargoes across the skies, which is what many aircraft now do. Of course you can’t blame Tennyson for not seeing that most aircraft would one day be devoted to shuttling tourists around the world, and that this in itself would become their major form of commerce. Despite this, the quotation can still sit there validly as an accurate prophecy of (part of) the future.
Here’s the problem, however. Doesn’t Tennyson’s vision, as now quoted, seem far more romantic and idealistic than the reality of commercial aircraft? Look at the words Tennyson uses. “Heavens” rather than “skies”. “Wonder”. “Argosies”, which at once conjures up images of stately galleons or the like. “Magic sails” suggesting something almost inconceivable. “Pilots of the purple twilight”, at once sounding like heroic adventurers. “Dropping down” rather than “landing”. “Costly bales” rather than “expensive cargoes”.  Put it all together, and it says that one day people will gasp in wonder and amazement at these magnificent flying machines, and see them as heroic.
And of course, we don’t. Once something is an everyday reality, it no longer amazes us. We take it for granted. This is what I have dubbed the “law of mundanity”. Aeroplanes landing and taking off, be they carrying costly cargoes or not? We don’t gasp in amazement and we don’t see their pilots as daring adventurers. The likes of Jean Batten (honoured elsewhere in the airport for her flight from England to New Zealand) might have been seen as daring adventurers eighty or ninety years ago. Aviation then really was a perilous adventure. But if we thought now that simply by flying we were going on a potentially dangerous adventure, then we wouldn’t book our flight. ‘Planes may and do sometimes crash, but their general reliability and ordinariness is why we fly on them at all. Do crowds gather in wonderment as they take off and land? Crowds are more likely to complain about the noise.
Of course there are those who say we should feel a sense of wonder. These are those boosters of science and applied science who often appear in TV documentaries, telling us how wonderful technology is, how ingenious inventors were and are, how amazing are the discoveries human beings have made. They have a point. Perhaps we should spend more time thinking about the collective genius that has created our world. But human nature always works against this sense of wonder. When we are used to something we are used to it, and we do not gasp in wonderment. It’s just part of our everyday life. We do not see the wings of aircraft as “magic sails” any more than we gather around to gasp in wonderment at the washing machine or microwave.
This reality always makes me a profound sceptic whenever I hear predictions of marvels that might one day exist. Scepticism about our future is a growing mood in current society. Even so, we still sometimes have utopias dangled before us, offering the conquest of all diseases, the solution of all social problems and the complete resolution of environmental issues. By all means let us work towards these things. But let us also remember that, when and if they come to pass, human beings will still yawn, scratch and regard the new world as mundane reality. They will not live in a permanent state of inspired wonderment. Where utopias are concerned, disappointment is inevitable.

*   *   *   *   *   *   *   *   *   *   *   *   *   *   *   *   *   *   *   *   *
Additional comments for pedants: The above is really the totality of my sermon for the day,  but there are probably a few people who want to point out an obvious thing about Tennyson’s “Locksley Hall”.  In its totality, it isn’t consistently optimistic about the future – and as he aged, Tennyson lost much of such optimism as he did have. Indeed, many years later Tennyson wrote a much more pessimistic sequel called “Locksley Hall Sixty Years After”, which damned industrialisation and the modern world. In itself, “Locksley Hall” is a moody young man’s poem (Tennyson was 26 when he wrote it in 1835, but it was not published until 1842). It begins as a self-pitying monologue – the speaker laments that a woman whom he loved has married somebody else and, of course, as most embittered lovers do, he tells us what a bad lot her husband is. But this leads him on to a variety of speculations on the future. A fuller version of the section quoted at Auckland International Airport reads thus:
For I dipt into the future, far as human eye could see,
Saw the Vision of the world, and all the wonder that would be;

Saw the heavens fill with commerce, argosies of magic sails,
Pilots of the purple twilight dropping down with costly bales;

Heard the heavens fill with shouting, and there rain'd a ghastly dew
From the nations' airy navies grappling in the central blue;

Far along the world-wide whisper of the south-wind rushing warm,
With the standards of the peoples plunging thro' the thunder-storm;

Till the war-drum throbb'd no longer, and the battle-flags were furl'd
In the Parliament of man, the Federation of the world.

Note that the underlined lines predict a future in which aircraft will also be used for war, before Tennyson returns to the more optimistic view of a “world parliament”  (the UN or its like). One could say that the partial quotation presented at the airport misrepresents Tennyson’s vision of what future aviation would be.
Posted by Nicholas Reid at 9:00 AM

Email ThisBlogThis!Share to TwitterShare to FacebookShare to Pinterest
Labels: Disappointment is Inevitable, Something Thoughtful