“WHAT SORT OF MAN – and other stories” by Breton Dukes (Victoria University of Wellington Press, $NZ 30) 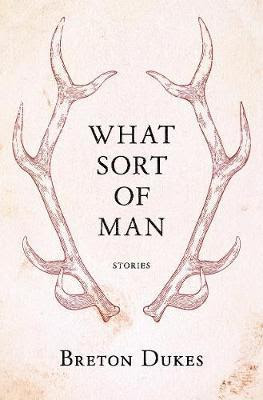 You never judge a book by its cover, but it’s worth stopping to consider Keely O’Shannessy’s cover design for Breton Dukes’ third collection of short stories What Sort of Man and other stories . Although no stories in this collection have anything to do with deer-hunting, the cover image is of a deer’s antlers and on both front and back covers are images of bloody fingerprints. At least for an older generation of readers, the cultural reference is clear. It harks back to Barry Crump’s best-known blokey, hunting, shooting, deer-culling romp A Good Keen Man, which was first published with a prominent image of deer’s antlers on the cover. But the bloody fingerprints on What Sort of Man and other stories suggest something more brutal and more complicated than the world as seen by Barry Crump. O’Shannessy’s cover design is more relevant to Breton Dukes’ world than the cartoonish images by Dylan Horrocks which were on the covers of Breton Dukes’ first two collections. 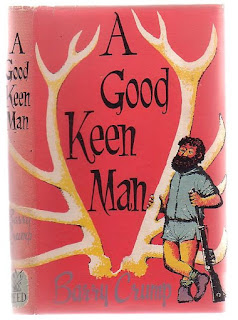 When I reviewed Dukes’ first collection BirdNorth and other stories on this blog back in 2011 (a review for which the author mildly rebuked me over some inconsequential inaccuracies), I said one of his stories was “not the blokey world of a Barry Crump anecdote” and another was “like a collision of  A Good Keen Man and the Slacker”. When I reviewed Dukes’ second collection Empty Bones and other stories for Landfall-Review-on-Line (September 2014), I noted that “a sense of sickened machismo hung over the collection, as if these young men ached to be Good Keen Men but had somehow been damaged before reaching that goal.” At the very least, many of Breton Dukes’ stories suggest that his male characters are struggling to find their place in the world; or, as the back-cover blurb to What Sort of Man and other stories puts it more sententiously, these “stories go head to head with the crisis of contemporary masculinity”. Now that pioneer days are over, now that rugby-racing-and-beer is no longer so firmly the national religion, what are young Pakeha New Zealand men now, and what exactly is their role? With stories specifically set in either Dunedin or Auckland, Breton Dukes examines various states and habits associated with received ideas of masculinity.


Apparently one male tendency is competitivness (although I’d suggest that women are as prone to this as men are.) In the story “Stone vs Cog and Rabbits”, three boys play beach-rugby on Cheltenham Beach, and it gradually becomes apparent that, for one of them, it is so important to win because of what is going on a home. (Where style is concerned, the real craft of this story is the way Breton Dukes is able to give a full account of the game despite its complexity.) For masculine competitveness at the other end of the age spectrum, there is the collection’s final story “The Swimmers” wherein two octogenarian men (both middle class, one a former school principal, the other an academic) compete fiercely in a swimming race. Their competitiveness in sport is fuelled partly by another sort of competitiveness. One of them is incensed that the other has made advances to his wife. 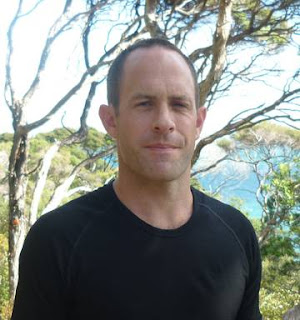 As prominent in this collection as it was in the two earlier ones is the matter of parenthood – more specifically fatherhood – and yet even this is tainted. Some fathers are clearly unbalanced. “Kid and the Tiger” has a father who thinks he has found Jesus and wants to be a good father, but he is so high and buzzy on a prescription drug that he suffers paranoid delusions and attempts crazy, dangerous stunts. The opening story “Ross Creek” has a father who is not fully self-aware. The senior school teacher Gary is alienated from his wife and his teenaged daughter because he was caught, at school, with files of teen pornography on his computer. He is under investigation and has been stood down from his job. His wife is disgusted with him. His daughter is shocked and depressed. Gauchely, Gary tries to reconnect with his daughter, but the story implies that his self-justifications mask his failure to understand his daughter’s angst. Only at the last moment does he realise that she is now in a position to judge him.


Other fathers are more balanced and have good intentions, but still have debilitating doubts about themselves. Told in the first-person, “Malcolm” is a sketch of a father in his 40s attempting to protect his 2-year-old son from a fierce dog, but also worrying that he doesn’t have the right sort of masculine courage. He thinks: “Even with all the drinking I’ve done, I’ve never been in a fight. Never stood up for myself or someone else, or broken up some beastly act by, say, wrapping my arms around an offender, or crash-tackling some dick. I don’t like violence. That’s part of it. But the main part is cowardice. When the thing happens and the brain is charged with the chemical that imposes either fight or flight, I’ll fly. But not if the thing was a person drowning in a river, or if a bedroom was burning up; then, I think, I’d go in. But not fighting. I mean, I’d defend [my son and wife]” (p.165)


A much more extreme, and probably less justified, form of this doubt is found in “Meat Pack”. In this first-person story we know that the narrator is a domesticated and caring father. He is looking after his sick young son. But as he does so, he is caught up in memories of his attempt, and failure, to be a macho hero in a pub fight years before. In memory he berates himself: “From birth I’d been released only into safe zones. School, Moana Pool, the movies, friends’ houses. University was more of the same. Flatting, attending lectures, flocking to the pub with others from the same background. But the building site was a new plane. Like TV prison, where hard-bitten inmates endlessly monitor for signs of weakness.” (p.47) Part of this seems to reflect how physically abashed men with middle-class manners are when they mix with tougher working-class men – a condition which always makes me think of Stephen Spender’s poem “My parents kept me from children who were rough”. But even without the class element, there is that deep-seated male sense that you’re not a real man if you don’t have physical courage or can’t use violence effectively against an enemy.  Two hundred-plus years ago, Samuel Johnson said  “Every man thinks meanly of himself for not having been a soldier, or not having been at sea.” This statement has often been ridiculed, or attempts have been made to discredit it – especially by men begging to explain that they’ve never wanted to be a soldier. But essentially Johnson was right. Even part of the most peaceable man’s mind thinks that virility is best expressed in winning a fight, and that is the condition that is addressed in “Meat Pack”.


Competitveness, fatherhood, and men’s lingering doubts about themselves are somehow addressed in all the above stories, but the most complex story (and the longest) is the eponymous one. The title “What Sort of Man” could as well be written with a question mark, as we are asked to work out what exactly the main character, Evan, is and what his values are. Evan is a young father, solicitous for his son’s welfare, who has taken on the job of caring for Carl, a severely autistic man who is apparently also a danger to children. (Interestingly, in his first collection Bird North and other stories, Breton Dukes also had a story, “Maniatoto”, about a man looking after a mentally-impaired man.) “What Sort of Man” has many explicit excremental details when Carl soils himself messily and copiously and Evan has to deal with it. In the course of doing so, he does something mean and a little selfish, more to salvage his own dignity than to help his charge. Yet later he finds a more genuine self-respect when he helps somebody out. This is a complex mix – Evan’s concern for his child, his official position as “carer” of the dependent man, his moment of callousness and his act of altruism. So what sort of man is this? A credible one, I think.


One story only focuses on a woman, “Being Sonya”. In an earlier review, I suggested that Breton Dukes’ novella “Empty Bones” showed greater interest in the way women think and that this might lead Dukes in a new direction in his writing. But apparently not. It is hard to see “Being Sonya” as anything other than the story of a self-deluded woman, a little drug-addled, in a failing relationship which isn’t helped by her chronic lying.


Even more resistent to arousing my sympathy is the story “Bullfighter”. In the same disgusting hell-hole of a Dunedin flat live Lance and Michelle. Lance stacks shelves at Countdown. Michelle sells Lotto tickets. Their jobs stink. They stink. They eat junk food. They chill out on Friday evenings by smoking weed. They’re on the bones of their bums. Sometimes Lance suggests, only half-jokingly, they do a robbery to get funds. He steals some money. She gambles it away. A long section of the story covers her gambling and her mistaken idea that she’s going to win big. With no money, no food and the power cut off in their flat, they mug a man carrying parcels of food. They race home and eat the (junk) food, well pleased that they have fed themselves another day. We have no indication that their lives will ever change. They will go on living in the same way.


This is not a story that questions masculinity. Lance and Michelle are equal partners in their way of life and in the assumptions they make. But I do question what the story’s purpose is. I am aware that “Bullfighter” could be seen simply as documentary reportage or a slice-of-life. No doubt there are people who live like Lance and Michelle. But I simply cannot  fathom what the author’s own attitude is. Could “Bullfighter” be a subtle critique of addiction, given that Michelle’s gambling is virtually an addiction and given that it takes up so much of the story? I do not expect or want Aesop’s-fable-like “morals” at the end of stories, neatly telling us what to think, but I would have been helped by some indication of the author’s own attitude. As it stands – and doubtless not the intention of the author – “Bullfighter” is one of those stories which allows middle-class readers (like me; like you who are reading this review) to feel superior to a pair of desperate losers. So does it have anything to offer above its sordor?


I am sorry to end on this negative note. Most of the stories in What Sort of Man and other stories are well-crafted and certainly show much skill in their close observation of physical details. Breton Dukes can tell a story well and, after three collections with much focus on the topic, he said much about male behaviour that is worth listening to. But is he going to beat the same drum in future?