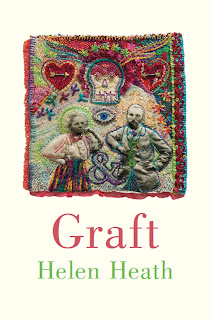 As I said in an earlier posting [look up comments on Shift via the index at right], I know it is a very unsophisticated thing to read poetry in order to dig out details of the poet’s autobiography. But sometimes it is hard to avoid doing this. Helen Heath’s new collection Graft tells us much about her interests and her family circumstances. She has some Greek heritage. She is intensely interested in science and in women’s place in science. And she is a mother.

Divided into three sections Graft addresses all these matters, but not necessarily in this order. 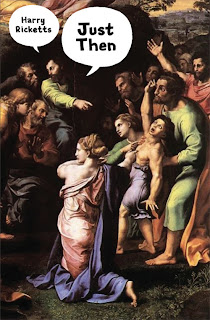 The first section, “Spiral Arms”, moves through poems reflecting on well-known scientists; poems that play variations on fairy tales; and some poems that appear to be thoughts on the death of a mother. In all these poems, some of Heath’s preoccupations are clear. She is interested in motherhood. She is interested in the phenomenon of sight, and hence of what constitutes clear-sightedness. She is aware of the uncertainty of the material universe; and she is aware of the certainly of death. Three of the poems refer to women scientists who died of cancer or radium poisoning contracted in the course of their researches. 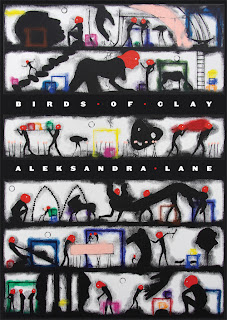 I understand that Heath wishes to celebrate the originality and endeavour of these women scientists, but one of her best qualities is a deliberate moral ambiguity, allowing for a more engaged response from readers. To put it another way, she is no simplistic feminist propagandist. For example, her poem on Beatrice Tinsley “Spiral Arms” is finely balanced, setting Tinsley’s fiercely-logical scientific mind against not only the limitation of death, but also the limitations of Tinsley’s own emotional life. The scientist is admired, but not canonised. In similar vein [and even though Heath identifies herself as an atheist elsewhere in this volume], the poem on Rosalind Franklin “Faith in this world” goes far towards suggesting that Franklin’s creed of pure materialism was defective.

The deconstruction of fairy-tales is often in terms of gender roles, as in the poem that notes mothers are “defined by… absence” in stories that deal with wicked stepmothers. Regarding mothers, the poem “The Whole Woman” recalls a mother who, in what many will see as a recognisable paradox, was “built like a bird, with hollow bones, / she relied on her eyes for discipline”. The strength of the apparently fragile!

The  second section, “Ithaca”, recalls a journey to Greece and consists of two pieces, the fifteen shorts poems labelled “Postcards” and the title poem “Graft”.
One of the “Postcards” poems is called “Up the hill” and gives me such delight that I quote it in full:

The truth about raindrops is
they are not shaped like tears.

Rain is only sad in wet places,
others greet it with euphoria.

Water is containment and travel,
it worries at earth and stone.

Things do smell better after rain, like
wild oregano up the hill from Vathy.

In a way, this little poem is emblematic of Heath’s larger technique. There is that specificity of observation. Each stanza presents a new proposition about rain in general – a demonstrable and provable statement -  with the last one bringing the poem back to the specific place her sequence is observing.

Much of the “Postcards” cycle draws on the contradiction of a continuing traditional peasant culture in an age of high tech – and the fact that the tourists who come to observe it (including, presumably, the poet) are also destroying it. One poem is ironically called “Lonely planet”. The cycle ends with a reflection in a derelict church and the poet wanting to know the material world better.

As Heath’s notes explain of the title poem “Graft”, the word ‘graft’ has many meanings, such as fusing two plants or digging (hence “grave”). I wonder how much Helen Heath was also thinking of “graft” as in the old colloquial “hard graft” meaning hard work. The poem records digging into the hard earth, in search of ancestral roots.

More diverse in subject matter, the third section, “Truth and Fiction”, has poems of adolescent recall and of domesticity, but gradually moves into dream imagery and ends with poems about a woman having an abortion. The volume’s one genuinely funny poem, “Spilt”, conveys what must be a relatively common domestic scene when a young woman is lactating.

It occurs to me that I have really botched this review by telling you about the volume’s contents without analysing any poem in detail, or adding layers of mystification as reviewers of poetry are wont to do. I’m not really sorry I haven’t done this, however. What I have tried to convey is my pleasure in poems that have such a forthright voice, such exact imagery and clear-headedness allied to a humane sensibility. Science fascinates Helen Heath, but she is aware that a scientific approach is only one way of encountering reality. If it was the only way, then there would be no impulse to write poems.

Helen Heath’s poems are often earnest and serious. By contrast, the dominant tone in Harry Ricketts’ latest collection, Just Then, is playfulness.

Sometimes this entails literal play, with poems that recall boyhood games of Cowboys-and-Indians and an ongoing interest in cricket. Three poems appear in the form of numbered lists. Three are blocks of free-rambling prose. Ricketts includes poems about having the imagination of a child and about his younger self [sometimes addressed as “you”] in love. Three rhyming ditties apparently date from the 1970s. There is an affecting piece on the awkwardness of trying to talk to a father about intimate adolescent matters. There are also poems in which Ricketts himself is the father, expressing pride in his children or reconstructing the former child in his grown son, who is now part of a rock group (“Phoenix Foundation”).

More than anything, though, his collection relies on literary and cultural references. They come thick and fast from the opening poem “El Prado” where the poet, under-whelmed by a gallery of Renaissance religious art, speaks of one viewer “randy for epiphany”, which immediately makes us think of Larkin’s Church-Going “ruin-bibber randy for antique”. References in the free-ranging prose-poem about lost-object-finding St.Anthony suggest it comes from the time when Ricketts was writing a book about First World War poets.

As I’m already revealing by my editorial comments here, one of the problems I have with reading poems about literature is that I am always measuring the poet’s opinions on the said literature against my own; rather than considering the poems as poems. In both “Arty Bees” and “Wendy Cope in Newtown, Sydney”, Ricketts reacts to second-hand books, and I find myself saying “Yes, I’ve done exactly that sort of musing about the previous owners of books I have bought second-hand”. When I read Ricketts’ poem  “How the 2008 modern poetry class cast its vote” I find myself saying that I can’t agree with the verdict of his 2008 class.

With the deepest of respect, and having amused myself greatly by reading it, Just Then often reminds me of the title of W.H.Auden’s volume of cultured clerihews - Academic Graffiti. It is a fun intellectual game.

Naturally she is preoccupied with identities, old and new. The volume’s first five poems [presented without a general title] combine dream imagery with peasant concerns about Easter and cooking and possible political upheavals; but their setting is deliberately vague and dream-like. There follows the experimental cycle “War Interrupted”, which appears to be memories of civil war, presumably in former Yugoslavia, and of neighbours and families drawn apart in their use of language and attitudes. The cycle yields what I consider this volume’s most striking pair of lines, describing the parents of affected children: “under the canopy of scars/ we stepped on our children’s language.”

The sequence of fifteen prose poems that bear the volume’s title, “Birds of Clay”, reflect on Serbian village life. I wonder about their title, which is in no apparent way connected with the sequence. Does it imply that birds of clay can’t fly away, but they can be shot at (as in clay pigeons)? Is there another war tremor about to rumble over these inconsequential observations on family and mating and village rambles?

With the sequence “Another Legendary Sky”, the collection moves away from the village and becomes global, ultimately connecting the old country with New Zealand. Its words are set out on the page like the patterns of constellations. Ursus the Bear is dwelt upon, not visible in the southern hemisphere any more than real European bears are. Last in this sequence is “Crux” (i.e. the Southern Cross) which is “hiding behind/ the round/ curve of the earth,/ trapped in another hemisphere, another legendary sky.” To change countries is to change the legendary background noise.

The “Bullet Time” sequence is, as I read it, about the conflict between pragmatism [or Realpolitik] and love. In it, the collection’s most overtly polemical poem “The Economist” posits the type of limited rationalised thinking, typical of neo-liberals, in which human needs count for less than the economic balance-sheet. Some of the poems in the next sequence “A Little Too Rare” explicitly compare Serbia and New Zealand. They also highlight the imagery of eggs that is found throughout the collection – as I read it, an image of life existing in potential and potential allowing for change.

It is not surprising that somebody concerned with other languages should produce a sequence called “Affairs of Grammar and Style”.  The last sequence in the collection “There Are No Ghosts in America” is a cycle of “found” poems based on the words of Serbian scientist Nikola Tesla. Each poem is headed up with a Serbian proverb (e.g. “A man wants to be better than everyone but worse than his son.”). The whole cycle gives evidence of a man with wild inspiration, a wild imagination and a rough childhood. Given Tesla’s current reputation ad status, they might also be expressive of Serbian national pride.

I had to work hard at reading many of these poems. The typographical mannerisms (especially in the sequences “War Interrupted” and “Another Legendary Sky”) ask for concentration but do not necessarily reward it. The prose poems are not noticeably rhythmical. While images are clear, meaning is sometimes opaque, even after repeated readings. I find something unfinished and un-worked in this collection. To some readers that will be a recommendation.
Posted by Nicholas Reid at 9:02 AM