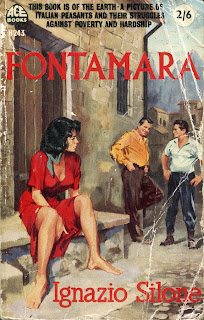 “FONTAMARA” by Ignazio Silone (written in Italian in 1930-31; first published in a German translation 1933; English translation 1934)
Allow me to say a word about a novel that is an Italian classic, but that, in the last two decades, has been reassessed anxiously by its author’s admirers, for reasons unknown to its first readers.

I’ll make the reasons clear at the end of this notice.

“Ignazio Silone” (pen-name of Secondino Tranquilli, 1900-79) was Italy’s best-known anti-Fascist novelist at the time of Mussolini’s dictatorship and Fontamara is the classic Italian anti-Fascist novel. It was written when Ignazio Silone was in exile in Zurich, having left Italy in 1930. Fontamara was first published in a German translation in Switzerland, and appeared in the original Italian only when it was published by an émigré press in Paris. One of the two people to whom Silone dedicated the novel was his brother Romolo Tranquilli, who died (after repeated beatings) in a Fascist jail in 1931. When American and British forces were fighting in Italy in 1944, they circulated Italian-language copies of the novel to local civilians as a propaganda weapon.  I read Fontamara in an old Penguin paperback published in the late 1930s. The Penguin translation of 1934 was the first English language translation.

Fontamara is almost plotless in any conventional sense. It is both protest novel and documentary novel.

Fontamara (translation “bitter spring”) is the name of a small impoverished village in the south of Italy. In the late 1920s, its peasants have a way of life that is one step away from the feudal. As southerners they have memories of having, in effect, been conquered by the Piedmontese and other northerners at the time that Italy was unified in the nineteenth century. Hence they regard carabinieri and other representatives of the central government as their natural enemies.

At the opening of the novel, electric power has been cut off in the village because the villagers can’t pay for it. As there are strict laws against internal migration, it is harder for men to move to more prosperous parts of Italy to find jobs or to better themselves. Should peasants go to the city to seek work, they will be forcibly returned. The clergy are corrupt. The local priest will not come to the village to say mass or bury the dead unless he is paid exorbitantly.

In Fontamara, Fascism is depicted as a racket, which unites profiteers, landowners, corrupt clergy and carabinieri in a conspiracy against the peasants. The only poor people who support Fascism are the landless and the skill-less thugs or (in the city) the gullible Lumpenproletariat, who simply make up the numbers in Fascist demonstrations or provide the muscle when socialists and others have to be beaten up. In the novel, one peasant returns to the village after having been absent for years, telling how he was hired as a Fascist bully-boy and rewarded at first; but was dumped after Mussolini was safely in power. Thereafter he was reduced to begging or procuring whores for a lustful priest.

As far as “story” is concerned, the main issue at stake is a profiteering speculator’s plan to divert a stream away from Fontamara. This would deprive the villagers of a basic necessity. The villagers protest. But the old feudal landowners, who would once have taken a paternalistic interest in their wellbeing, no longer feel the need to do so. To teach the Fontamaresi a lesson for daring to protest, truckloads of blackshirts descend on the village, smash up houses and rape women.

In the last chapters, the rebellious peasant Bernardo Viola goes to Rome. He is arrested. To save somebody else’s life, he accepts responsibility for having edited an underground anti-Fascist newspaper. He is therefore executed for something he did not really do. But at least he has learnt the lesson, which Silone is eager to teach, that the peasants should show solidarity in the face of Fascism, rather than fighting among themselves.

The villagers try to set up a newspaper as a voice for protest, but the novel ends with Fascists again invading the village, smashing the peasants’ printing press and committing massacre. Some survivors flee, to tell their story.

The last words are the villagers’ plea :  “After so much strife and anguish and tears, and wounds and blood, and hatred and despair – what are we to do? ”

Obviously this was the key question at the time the novel was written.

On the dust-jacket of the old Penguin edition I have (yes, paperbacks did sometimes have dust-jackets then) there is a quotation from a review, which H.E.Bates wrote of the novel. Bates remarked: “Silone has rightly realised that one of the greatest weapons of the propagandist is ridicule, and the way in which he has used that weapon in Fontamara is smashing. ”

Much of the novel operates with a sort of Socratic irony. It is supposedly narrated to Ignazio Silone by the surviving peasants of Fontamara. They therefore speak in the first-person plural “we”, which makes them, in effect, a collective hero. They are also mainly illiterate and ignorant of the great world beyond their little village. They deflate the pretensions of Fascism by their deadpan account of events and their simple ignorance. In a way, the irony of the novel is a distant cousin to the irony of The Good Soldier Schweik, often grimly funny but with a deadly serious purpose. I could say that there is no character developed in depth and nothing like psychological detail in Fontamara. But that would be to ignore what the novel is up to and what it intends to be up to. After over eighty years, it is still a powerful protest novel. It is quite understandable that, with this novel and with his next novel, Bread and Wine, Silone was regarded as Italy’s most forceful anti-Fascist voice.

But now we come to the problem that has caused anxious reassessments of Silone since the mid-1990s.

Silone had been a member of the Italian Socialist Party, then was a founding member of the Italian Communist Party in the early 1920s, just before Mussolini gained power. He left Italy in 1930 and did not return until after the Second World War. Quite soon after leaving Italy, Silone broke with the Communists, reaffirmed his Socialism and denounced Stalin. For a while he was a Socialist deputy in Italy’s post-war parliament. He later contributed a good essay to the 1949 collection The God That Failed, a book of essays rejecting Communism, all written by former Communists. (Naturally the book is loathed by many old lefties and seen by them as mere Cold War propaganda, but the essays are still worth reading).

Told like this, Silone could be seen as the Italian equivalent of George Orwell – the conscientious leftist who came to hate Communism.

In the 1990s, two Italian historians Dario Biocca and Mauro Canalli dug up information, which seemed to show that throughout the 1920s, and even while he was a leading member of Italy’s clandestine Communist Party, Silone was acting as an informer to OVRA, the Fascist secret police. He provided inside information on Communist Party meetings and actually dobbed some fellow Communists in to OVRA. At first, this revelation was seen as a piece of left-wing scuttlebutt. But by now nobody doubts the authenticity of Biocca and Canalli’s revelations. There are many discussions of the affair available on-line, one of the best being John Foot’s “The Secret Life of Ignazio Silone” which appeared in the New Left Review of May-June 2000. (As a leftie, John Foot inevitably and foolishly refers to The God That Failed as a “notorious symposium”, but we can forgive him his prejudices.)

All this leaves us with a number of interesting questions.

How do we read the novel when we know that the author himself was implicated in Fascist misgovernment? How on Earth could somebody who so persuasively wrote against Fascism harbour such a secret? Do we write Silone off as a mere hypocrite?

I first read Fontamara before I knew anything of this problem. I accepted it as the forceful and effective protest novel that it is and that it has been for generations of readers. I still think this is the only way to read it. I do wonder if Silone was ahead of the crowd in realizing that Communism was at least as inhumane a system as Fascism; but I’m aware that this does not justify the treachery he practised in the 1920s. I am left with the image of a writer who was obviously tormented by his own duplicity and I make all sorts of speculation on how much the arrest and mistreatment of his brother may have eventually led him to break with his paymasters, leave Fascist Italy, and become a sincere anti-Fascist after all.

But above all, I’m driven back to my own basic aesthetic.

You judge a book by the book itself, not by extraneous material you know about the author and his circumstances.

Seen in these terms, Fontamara still deserves its high reputation, regardless of what may have been tormenting Ignazio Silone’s soul when he wrote it.
Posted by Nicholas Reid at 9:01 AM