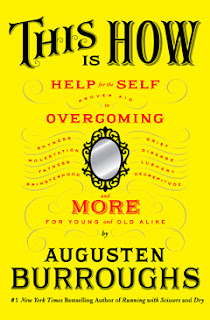 “THIS IS HOW” by Augusten Burroughs (Picador $NZ38)

This is a real departure for me. On this blog I have never once dealt with a self-help book because self-help books are generally anathema to me. The few that I have dipped in to appear to be mixtures of pop psychology, sloganeering, and a few outbreaks of common sense. They are usually packaged in such a way that the less wary public can think their platitudes and truisms are powerful insights, especially if the author has been canny enough to invent some catchy phrases that can be quoted by reviewers. They also have the habit of presenting whatever it is they have to say in bite-sized chapters and short paragraphs, that approach the bullet-points of the inspirational lecturer. They are not wisdom collected and meditated upon. They are midway between being the hucksterism of the advertising agent and the Twelve Steps programme of Alcoholics Anonymous. If I see a lot of self-help books on somebody’s bookshelves, I think “This person has sad reading habits. And lacks real friends to set him/her straight on life.”

There now. In one handy, easy-to-reference, arrogant paragraph, I spew out all my feelings against self-help books.

I think my feelings are well-founded, but then feelings unsupported by renewed evidence tend to become prejudices, and I don’t want to be accused of mere prejudice against a whole genre. So when a friend whom I respect, and who has had real trials in life recently, heartily recommended Augusten Burroughs’ This Is How as something that had been of help, I thought I’d give it a try.

The book has a slightly defensive, self-mocking tone, signalled by its cover, which is designed like a nineteenth century fairground poster. There the full title is given as This is How. Help for the Self. Proven Aid in Overcoming Shyness, Grief, Molestation, Disease, Fatness, Lushery, Spinsterhood, Decrepitude and More. For Young and Old. We are set up to see that such comprehensive claims are slightly ludicrous.

And so it proves in the book’s brief, short-paragraph-laden chapters.

It gets off to a good start. Burroughs tells an anecdote about feeling lousy and then meeting, in a lift, a woman who made an uplifting, inspirational comment intended to make him feel better. Of course it made him feel even more lousy. The moral he draws? “Affirmations are the psychological equivalent of sprinkling baby powder on top of the turd your puppy has left on the carpet. This does not result in a cleaner carpet. It coats the underlying issue with futility.” (Pg.5)

Quite so. What is more dishonest than Coue-like auto-suggestion in which you lie to yourself rather than facing your real problems? Inspirational affirmations are sugared lies.

Burroughs has one recurring theme – you have to help yourself.

As a corollary to this, he preaches that most form of help that are offered to you are delusional and in fact encourage a crippling dependence upon other people.

If I followed his chapters through in sequence, they would read something like this:

Be honest about your feelings, but don’t let them drive you.

If you want to find love, get out and meet people, because there is no magical “soul mate” waiting to meet you.

If you’re fat and you can’t diet, get used to the beauty of your fatness and stop relying on other people’s ideas of what beauty is.

Anorexia nervosa is not cured by keeping an eating diary, which just makes you a slave to your disorder. It is cured by facing your problems honestly and overcoming them.

Self-pity means you want other people to solve your problems. Get over it.

You will overcome shyness and lack of confidence if you live in the moment and realize most other people are as lost as you are.

Failure is good for you. Learn from it.

If you want to get through a job interview, just concentrate on what your interrogators are saying. Forget other things.

Shame is a way other people manipulate you.

Be honest about the shortcomings of your sex life, and if you’re not happy with your marriage or relationship, leave it.

Don’t commit suicide. It you want to “end your life” then end the lousy sort of life you are living and change the way you live.

Real loss never heals. It’s part of you. Get used to it.

Therapy doesn’t help you to come to terms with the past. It just makes you keep reliving the past and it makes you dependent on the therapist.

If you are a smoker or a drinker who wants to quit, you will only do so by will power and cold turkey. All other methods just become a contest between you and somebody else’s idea of a cure.

Telling people to follow their dreams, no matter what, is a recipe for disappointment. Some people simply do not have the talent or ability to become what they want to become, and they sooner they realize this and reorient their lives, the better.

I think I have summed up accurately and fairly what Burroughs has to say, and I would agree that much of it is robust common sense. Burroughs paradigm of human nature is expressed on Page 59:

“But make no mistake: you are alone in the world. You were born alone, even if you were born conjoined. And you die alone, unable to bring a single person with you. Self pity means waiting for the man with that glass slipper that fits perfectly to knock on your door. Self-pity is waiting to be bottle-fed your dinner.”

The mocking fairy-tale imagery recurs a number of times, as in:

“Once the current moment moves into the past, it is entirely gone. It ceases to exist except in documents, photographs and an impression left in a sofa cushion. The past – and all the moments it contained – is no longer sharing the world with us. They are no more real than Cinderella. To spend time – year after year – in therapy or on your own thinking about your past and forming conclusions and stitching the elements into a narrative that you can name ‘the truth’ in order to be ‘free’ of it, is not how you become free from your past.” (p.120-121)

And yet, while all this is doubtless catnip to somebody moping around fondling his/her sorrows, there is a strong strain of heartlessness in Burroughs’ book. An undertone is really implying that other people don’t matter, only your own well-being does. Though often expressed flippantly and with witty one-liners (I understand this book is marketed as much as a humour book as it is as a self-help book), This is How is in some ways the reductio ad absurdum of American Individualism. Only you are real. The outside world may as well not exist. The notion of human solidarity is rarely broached.

“Admitting you feel rage or terrible pain or regret or some old rotten blame does not mean these feelings are part of what you are as a person. What these feelings mean is, you need to change your thinking to be free of them. Maybe you need to stop fiddling with an old wound and stirring up these old feelings.” (Pg.14)

True as a shock cure. But doesn’t that “change your thinking” signal the type of rationalism that “solves” problems by pretending there is no reality outside the way you think about things? As Hamlet says in one of his dodgier moods, “There’s nothing either good or bad but thinking makes it so.” (A quotation which, I am appalled to see, some pop therapists take at face value.)

When Borroughs speaks of shame as a device whereby people can manipulate others, I agree in part as I know shame can be used thus. But then aren’t there times when shame is exactly what we should feel about the wrong things we have done? Of course you don’t wallow in shame or cultivate it. If you feel shame about something, then make amends or try to set right the wrong you’ve done. To see it only as external manipulation comes close to saying that we should never feel ashamed of anything we have done – in other words, that we are always in the right. Again, this is the solipsism that lurks in much rationalism.

In a similar vein, I would find it hard to agree with Burroughs when he tells us that he comforted a woman who was grieving over her son’s death by alcoholism, by telling her that in his last binge her son was at least doing what he enjoyed. How I feel is apparently the criterion of moral rightness. There is no objective criterion.

A little bit about “Augusten Burroughs” in case you don’t know. The name is a pseudonym adopted by Chris Robison when he was an unhappy teenager. He was the son of a lesbian poet and a professor of philosophy who divorced when he was young. He was adopted by his mother’s psychiatrist, who ran an open home for all sorts of people who had extreme behaviours. Burrough claims he was regularly abused sexually by a paedophile, who was in the psychiatrist’s entourage. He went through years of alcoholism and unsuccessful rehab before hitting on being a memoirist and writer of inspirational books. His best-known memoir – a long-term bestseller – is Running With Scissors, about his horrible childhood and how he overcame it.

There now – you have his background but [sorry] while I can see how all this feeds into the views he expresses, and while it must certainly have something to do with his very sceptical take on therapists, psychiatrists and their colleagues, for the thousandth time on this blog I’m forced back to my old aesthetic. You judge a book by the book, not by external material concerning the author’s woes, struggles and triumphs.

Judged as a book in its own right This is How, offers some good advice to the self-absorbed who need to snap out of it and realize there is no magic cure to their problems. For them, it could be a tonic. Some of the jokes are good. Some of the pokes at therapy and 12-step programmes are well-placed. But it is still a self-help book and the hectoring, one-sentence-per-paragraph, almost-like-bullet-points style can weary. In short, it is a self-help book addressing a certain market. And I’m not part of that market.
Posted by Nicholas Reid at 9:02 AM

Email ThisBlogThis!Share to TwitterShare to FacebookShare to Pinterest
Labels: Augusten Burroughs, Something New, THIS IS HOW