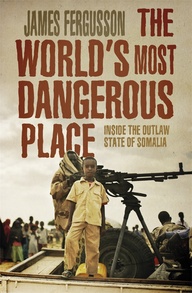 Somalia, on the Horn of Africa, is in a state of chaos. It has an official government, the TFG (Transitional Federal Government) in Mogadishu. But out in the desert and scrub-lands, tribes rule and the notion of a functioning government is really a joke. Various Western interventions destabilised the region in the twentieth century. There followed the long-term dictatorship of Siad Barre (from 1969 to 1991). Then there was many-sided civil war, fed at least in part by Islamicist groups funded from other Muslim countries. In most of the land, real infrastructure is virtually non-existent.

Truth to tell, Somalia is only dubiously a state at all. When independence came from European powers a couple of generations ago, not all Somalis wanted to be part of the new state of Somalia. Though it has a Somali population, Djibouti chooses to remain firmly separate, as does the confusingly-named Somaliland. Real authority in Somalia itself is a congeries of tribes, warlords and youthful fanatics, with the central government having little power to overcome traditional tribal loyalties. Worse, the UN places it at the top of its list for government corruption. And over two million of its citizens have fled abroad, most of them to such Western nations as Britain and the United States.

We are dealing, then, with something so chaotic that it is difficult to write a straightforward political or social commentary upon it.

But British journalist James Fergusson has imposed at least some sort of order upon his book The World’s Most Dangerous Place (subtitled Inside the Outlaw State of Somalia). Based on his journeys in Somalia in 2011, and his investigations of Somalis abroad in 2012, this is a very generous slice of journalism, running to nearly 400 pages (exclusive of its two sections of colour photographs). And like Caesar’s Gaul it is divided neatly into three parts.

In the first part, Fergusson is with the soldiers of AMISCOM, the African Union Mission in Somalia, made up mainly of Ugandans and Burundians. He is an “embedded” journalist, observing what is officially a peacekeeping mission, but is unofficially a continual war against al-Shabaab. The literal translation of al-Shabaab is “The Youth”. This Islamicist movement is made up mainly of youthful recruits, and hence is very much the Somalian equivalent of the Taliban. Many Taliban and al-Qaida leaders have indeed fled to Somalia, made it their new base, and recruited hungry and gullible boys.

In these first seven chapters, Fergusson is mainly in the shattered remnants of Mogadishu.

In the second part of the book, he moves out into the backblocks of Somalia – particularly the northern coastal regions, where piracy has once again become big business. Finally, in the third section, he is with the “diaspora” of Somalis living in London and Minneapolis.

Even in this orderly organization of material, much of what Fergusson tells me suggests chaos. There is, for example, this indication of violence as a routine feature of the everyday life of children:

“Mogadishu was a city where violence was so endemic that it had become the norm. The sleep of its citizens was no longer disturbed by the sound of shooting at night; small boys thought nothing of playing football in their street while a firefight raged up and down their neighbourhood. In 2011, according to the World Health Organization, nearly half of Somali victims of weapon-related injuries were children under the age of five. An entire generation of Somalis had grown up knowing that they could be violently killed, at random, at any time.” (Pgs.45-46)

Fergusson makes this remark while visiting a primitive hospital in the city, which treats both military and civilian casualties. Later he describes Mogadishu as “Lord of the Flies with automatic weapons” (Pg.72)

Perhaps even more shattering are his accounts of young girls (and we are talking nine- and ten-year-olds as well as teenagers) who are forced into “field marriages” by the young warriors of al-Shabaab and others. This means months of being treated as sexual utilities, raped and mutilated before being discarded. Again, in visiting a hospital, Fergusson sees wards of bruised and damaged young girls, some with the babies that their “field marriages” have produced.

In one thirty-page chapter, Fergusson gets to talk to deserters from al-Shabaab. He discovers that they are mainly foolish and uneducated teenagers. Some were so naïve that they were drawn into al-Shabaab by recruiters who showed them clips from Bollywood musicals and claimed they were documentary evidence of the virgins awaiting them in Paradise, should they sacrifice themselves for the Islamicist cause.

Here is how Fergusson describes their first encounter:

“One day, waiting at the base convoy point for another ride up to the front, I came across three recently captured al-Shabaab fighters, the oldest of whom was seventeen, the youngest fifteen. They were slumped along the wall of an administrative Portakabin awaiting transport to who knew where, their hands cuffed behind their backs, dirty and dejected, a look of shock in their eyes. They were volunteers, they said, who had put their hands up when an al-Shabaab recruiter came to their school. This had happened just fifteen days ago. They decided to surrender when they became separated from their unit and ran out of bullets. Why, I asked, had they put their hands up in the first place? The boys all looked at each other.
‘We were given a piece of fruit every day,” said one of them.” (pp.152-153).

This last sentence reminds us of another Somali reality. Famine has been a major recruiting agent for Islamicists. Like most famines in human history, the great Somali famine of June-July 2011 was not caused by the forces of nature, but by foolish human decisions. And al-Shabaab would not allow relief agencies to distribute food in the areas they controlled, as al-Shabaab knew that hungry people were more pliable.

Fergusson does mention the good intentions of the TFG and the international forces, which helped to set it up. But he has to note that attempts at stable government are always subverted by the need to maintain tribal balances in the allocating of government offices; and hence tribalism continues to be supported, promoted and embedded in the feeble state. He also notes that a disproportionate number of TFG ministers have been literate, but under-qualified, returning refugees who simply do not understand how a government should function.

When he moves out to the northern province of Puntland (on the actual “horn” of Africa), Fergusson meets at least one sophisticated official who suggests that maybe Sharia law, for all its inhumanities, wouldn’t be such a bad thing after all. At least it would give some predictable order to a county without this commodity.  Up in Puntland lives one third of Somalia’s population. And up in Puntland, the only sealed road is one that was built eighty years ago by Mussolini’s colonising Italians. The main legitimate income of this region comes from import duties. Real income derives from piracy, despite the smooth assurances Fergusson is given by a provincial official.

If I were to summarise all of the contents of this book, I would simply produce a catalogue of miseries. But alongside his (necessary and vivid) reportage, Fergusson has built something else into The World’s Most Dangerous Place. Two of the book’s most interesting features are the ongoing dialogue Fergusson conducts with other Western observers of Somalia; and his awareness of how much Western perceptions colour what is reported. I am interested to note how often he refers to the remarks of the nineteenth century explorer Richard Burton and mid-twentieth century novelist Gerard Hanley as perennially reliable guides to the Somali mentality.

Fergusson is unsparing in his analysis of the way Western influence has played its part in destroying this country. Somali tribal warfare in the nineteenth century became truly lethal only when it was armed with the best modern weapons. Clan feuds inflated to full-scale wars once the British and Italians left plenty of equipment and ammunition lying around in Somalia after the Second World War. The Siad Barre dictatorship relied extensively on US backing. The US saw it as a counter to the Soviet-backed dictatorship next door in Ethiopia. The dictatorship made Somalia even poorer than it had already been. The collapse of the dictatorship coincided with arrival of Jihadists. Fergusson compares the early 20th century Somali “Mad Mullah”, Muhammad Abdullah Hassan, fighting the British, to Osama bin Laden fighting Alliance forces. Similar mentalities are in play.

Fergusson also notes how much Western pop culture gives people an unreal image of the region. He refers a number of times to Ridley’s Scott’s film Black Hawk Down, based on the incident when American helicopters were forced down in Somalia and their crews massacred. In his opinion, the film sold the world foolish stereotypes. He gives an account of the media circus at the time of the Somali famine, with Hollywood actors forcing themselves into the limelight to show how concerned they were with humanitarian relief. Mind you, their limelight-hogging was pardonable compared with the posturing of Ghana’s Jerry Rawlings, who also visited Somalia during the famine, with camera crews in tow.

As Fergusson tells it, the US now is desperate not to be identified with AMISCOM’s war on al-Shabaab. For “the Great Satan” to be seen as backing these African peacekeepers would simply provide Islamicists with a propaganda weapon. Yet the author spends time at the fortified “Bancroft Hotel” in Mogadishu, which crawls with African and Western “advisors” and mercenaries, some CIA among them.

And there is also an awareness of the way Western pop culture influences the locals. Here is an early passage where Fergusson describes the Ugandans he met in AMISCOM:

“Some of the men, in their aviator sunglasses and decorated helmets, looked so astonishingly like extras in a Vietnam war movie that I think they must consciously be emulating Hollywood. Yet there is no doubt what generation they belong to when one of them nods and grins and says in a near flawless American accent, ‘How ya doin’, man? Are you on Facebook? I’ll catch you later on Youtube.” (Pg.21)

And in the long chapter where Fergusson examines those Somalis now living in London (it is called “The Somali Youth Time-bomb”), he quotes this interesting fusion of black American rap and Jihadism, as chanted by some young London Somalis:

“For the cause
We kick down doors and break laws
We don’t care about police we live by Allah’s laws
For the cause I clap down niggaz that test me
I’m a Muslim. I can let nothing oppress me
For the cause I won’t stop till I reach my garden
I beg your pardon. I ride with bin Laden.” (quoted pg.273)

I do not believe Fergusson trivialises anything he reports, but he cannot help being aware of the irony of being a Western journalist in a land of war-torn, starving and intimidated people. In the Mogadishu sections of this book, he frequently expresses feelings of guilt about going back each evening to a comfortable, secured hotel, after another day of observing human misery. He does not leave us with despair. A final section of the book suggests that AMISCOM now has the upper hand over al-Shabaab. But his own delicacy of feeling is to his credit.
Posted by Nicholas Reid at 9:02 AM

Email ThisBlogThis!Share to TwitterShare to FacebookShare to Pinterest
Labels: James Fergusson, Something New, THE WORLD’S MOST DANGEROUS PLACE