This week’s “Something Old” is written by a guest reviewer, Hugh Major. He is an artist and designer whose volume of philosophical engagement Notes on the Mysterium Tremendum was reviewed on this blog in 2012 [look up the review via the index at right]. Hugh here considers a book that could be mistaken for a pure adventure story, but that presents an implicit philosophy of life. Its author Maurice Herzog (1919-2012) was a distinguished French mountaineer who later became French Minister for Culture and Sport. 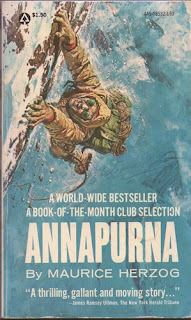