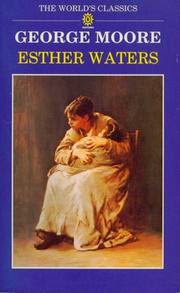 Quite some time back on this blog, I wrote an appreciation of The Lake, a novel by the Irishman George Moore (1852-1933). My appreciation of this very Irish novel was answered by another appreciation of it written by Professor Brian Boyd (look up the author and the novel on the index at right). As I said at the time Moore, who once had a very high reputation but who now tends to be known only to specialists, was of Irish Catholic stock and wrote extensively about Ireland, often with a critical and certainly with an anti-clerical and anti-religious tone. But his instincts and cultural training were more Continental than Irish.  He admired Zola and spent some time in Paris painting and learning to write Naturalist novels. His most Zolaesque works (such as A Mummer’s Wife, the story of an alcoholic woman in an acting company) have an English rather than an Irish setting. And as I wrote in my account of The Lake, anyone reading those of his novels not set in Ireland would assume that the author was an Englishman rather than an Irishman. 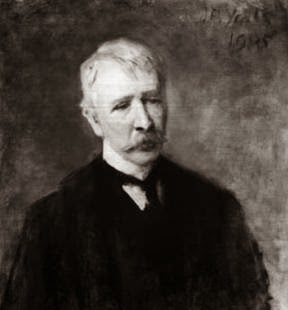 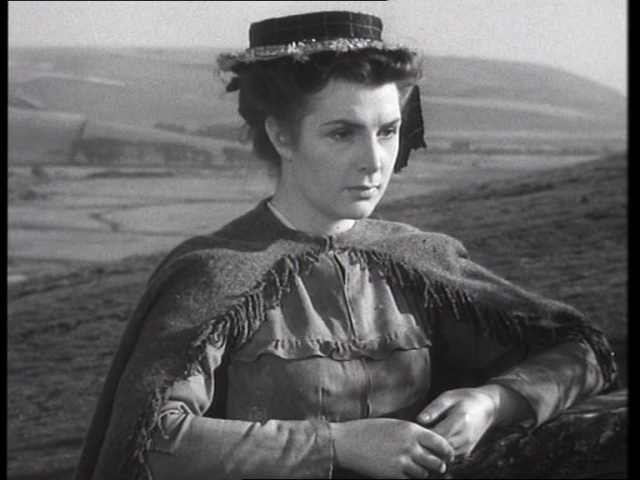 Silly Footnote: I first read Esther Waters as a teenager, because there was a television adaptation of it in the 1960s. I re-read it about twenty years ago when I was making my way through nearly all of Moore’s novels. For some reason, when I got to read it the second time, all I remembered from my first youthful reading was a phrase that occurs in the following scene where Esther and her friend Sarah Tucker are at the Derby. The scene goes like this: “Sarah continued her cursive chatter regarding the places she had served in. She felt inclined for a snooze but was afraid it would not look well. While hesitating she ceased speaking, and both women fell asleep under the shade of their parasols. It was the shallow, glassy sleep of the open air, through which they divined easily the great blur that was the racecourse.” (Chapter 32) The phrase that had stuck in my mind, after most of the rest of the novel had slipped away, was “the shallow, glassy sleep of the open air.” Now why should this be so? I haven’t the faintest idea. Maybe it was simply a case of me recognizing a state which I had experienced myself – that odd half-asleep state when you doze at the beach or in the back yard and you can hear noises but register them in a different way from the way you register them when you are fully awake. Anyway, there it is. Hardly a resonant phrase, but one that stuck for years in my mind. “The shallow, glassy sleep of the open air.” Curious. 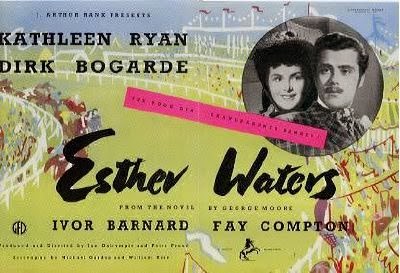 Sensible Footnote: I recently saw, courtesy of the miraculous Youtube, all the 1948 film Esther Waters starring the forgotten Kathleen Ryan as Esther and young Dirk Bogarde, in his first starring role, as William Latch. It also has a very young Cyril Cusack as Fred Parsons, the sympathetic evangelist. I have noticed that nearly all the on-line reviews of this film are either patronising or dismissive of it. One singularly inept website (Britmovie) refers to it as “an 18th century bodice-ripper”, showing that the web-writer is capable of being wrong on two counts. The film is set in the 19th century, not the 18th – meaning the web-scribbler is one of those semi-literates who say “the 1800s” when they mean the 19th century. Further, the film is by no means a “bodice-ripper” in the accepted sense of that term (meaning a story with a period setting and much explicit sexual play). What actually surprised me was how close to the novel it was. The ending has been hyped up a bit to give it more punch (William Latch’s dying in a sanatorium is intercut with exciting scenes from the Derby on which he is gambling). Otherwise, it is essentially George Moore’s story – complete with a rather jarring affirmation of mother love in the last shot. The raffish racecourse scenes were convincing and I was surprised that a film of this vintage could have what was so clearly a baby-farmer talking about how she could dispose of Esther’s baby. Rather dour and plodding, by no means a classic, but an honourable enough literary adaptation nevertheless.
Posted by Unknown at 9:01 AM