Recently I took a book of poetry off the shelf and was flicking through it idly. I often do these things. The book was an anthology of poetry from the 1920s, and I was flipping the pages over from back to the front, so that I did not see the name of each poet before I saw the poems themselves. My eye fell upon one sonnet, which I thought was pretty good. I reproduce it below:

See where Capella with her golden kids
Grazes the slope between the east and north?
Thus when the builders of the pyramids
Flung down their tools at nightfall and poured forth
Homeward to supper and a poor man's bed,
Shortening the road with friendly jest and slur,
The risen She-Goat showing blue and red
Climbed the clear dusk, and three stars followed her.
Safe in their linen and their spices lie
The kings of Egypt; even as long ago
Under these constellations, with long eye
And scented limbs they slept, and feared no foe.
Their will was law; their will was not to die:
And so they had their way; or nearly so.

Very well. I’m not saying that this is the acme of sonnets. I’m not saying that the ideas are brilliantly original (the eternity of the stars; the delusions of power; ars longa, vita brevis etc.). I might also get a bit snarky about some of the rhymes. “Poured forth” seems used only to justify “north”, and “slur” isn’t quite appropriate to the friendly joshings that are presumably implied. But having said this, it is still a good and solid and thoughtful poem. While knowing it was in a rather old-fashioned idiom, I still read it with great pleasure.
So having taken this all in, without knowing who the poet was, I flipped back a few pages and discovered it was written by…. Edna St.Vincent Millay.
Clunk!
At once all the received opinions in my head assailed me. Edna St.Vincent Millay? 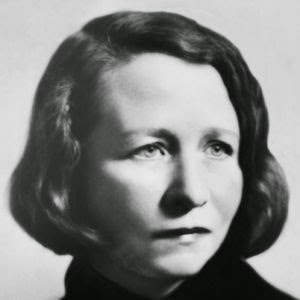 You mean that rhapsodising American antique who was caught out by Modernism and already seen as a back number before she died in 1950? You mean the silly “flapper poet” who wrote twittery verses about burning the candle at both ends for young women in the 1920s who wanted to smoke and drink bath-tub gin? You mean the one who wrote that nonsensical propaganda poem about justice denied in Massachusetts? The one who was rightly ridiculed for trying to write patriotic poems during the Second World War when her poetic talent had gone?

Um. Yes. I mean that one. And I had been reading a perfectly good poem without knowing it was written by this person. How embarrassing.
And then, of course (as it always does on this blog) the true moral of the story hit me. The proper way to judge any writer is by what she or he has actually written, not by reputation. By and large, the received, negative view of Edna St.Vincent Millay is accurate. She really did write much time-specific stuff which might once have seemed “daring” to college girls but which now looks very faded indeed. But this doesn’t mean that she didn’t have her moments and also write at least some fine poems. So here is one and I hope you enjoyed it.
Naughty additional thoughts also came my way. How often do we judge writing by what others say about it rather than by what our own eyes and brains tell us?
A personal confession. I have four times guest-edited Poetry New Zealand – a task which always involves sorting through piles of submitted poems from both the well-known and the totally-unheard-of. Should Incredibly Famous Poet XYZ or Well-Known Literary Figure ABC submit something, I would of course accept all (or nearly all) of the submission for publication with gratitude. But if it was Unknown Poet *%#!&, I would scrutinise it far more carefully before accepting or rejecting it. In short, I made judgments at least partly on the basis of reputation.
This leads me to wonder if all literary journals shouldn’t become more equitable by insisting that submissions be anonymous. Of course somebody would have to know the names and addresses of people who submitted material, if only to return unwanted typescripts or send cheques. But a system could be worked out of having submissions shorn of identity by some secretary before the editor got to see them. (This is what happens in some literary competitions.)
You never know. It could lead to more works by established “names” not finding a home.
Or it could lead to more nervous breakdowns among editors.
Posted by Unknown at 9:00 AM

Email ThisBlogThis!Share to TwitterShare to FacebookShare to Pinterest
Labels: Advantages of Anonymity, Something Thoughtful