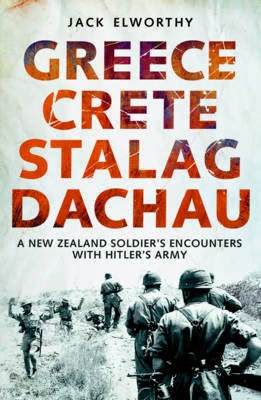 three generous sections of photographs have the advantage (not always found in photographic sections) of presenting only images that are relevant to the tone and matter of the author’s narrative. The first image is of young Jack Elworthy with his wife and baby son. The last is of old Jack Elworthy on the day of his retirement in the 1950s. In between, probably the most endearing image is one of Elworthy, in the last months of the war, standing in American uniform at the right end of a line-up of his American buddies. It’s funny how he manages to look both one of them and out of place at the same time. 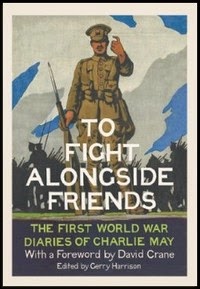 To Fight Alongside Friends, a handsome hardback, is a very different first-person document of war.
These are the diaries of a British officer in the First World War. Charlie May was born in Dunedin in New Zealand, but having lived in England for some time, he joined an English “Pals” battalion. “Pals” battalions were one means of making volunteering more attractive as England built up its “New” Army to add to its very small professional army. Friends from a certain locality were allowed to volunteer together and serve in the same units – hence the book’s title To Fight Alongside Friends. The downside (not dealt with in this book) is that if “Pals” units were hit hard in battle, a specific locality back in Blighty could find itself deprived of most of its young manhood. Charlie May was a captain in the 22nd Manchester Service battalion.
Front line officers were forbidden, by King’s Regulations, to keep diaries for the obvious reason that, if they were captured or killed, such diaries could fall into the hands of the enemy and be gleaned for military information. Charlie May, however, ignored regulations. He had spent some time as a journalist before enlisting and had a compulsion to write and record things.  He kept his diary in seven small notebooks which survived his death and were sent back to his family.
The first entry is in November 1915 before he had embarked for France. The last is early on the morning of 1 July 1916, the first day of the Battle of the Somme. This day has become iconic as the day when the British Army suffered more casualties (dead or wounded) than on any other day in its history. Among common soldiers, with a less fastidious vocabulary than Charlie May, it became known as “the big f**k-up”. Charlie May was killed on that day. In his last entry, before going over the top, he writes in a spirit of exultation, as if he is about to be part of a great military achievement.
Of course there is a cruel irony in this ending and, for this reader at least, there is unintended irony throughout the book. May’s attitudes are, by and large, conventionally patriotic ones, very much in tune with the times. He hates the enemy and sees Germany as being entirely responsible for the war, writing on 13 January 1916: “Curse the Kaiser, say I, and all similar tyrants who bring war and misery and devastation upon the world?” (p.69). He is mildly amused by those near the front, such as the padre, who do not have a military spirit and who are not like the common soldiery. “Parson Wood came in to tea,” he writes on 13 April 1916, “He is a somewhat dolorous person but means well, works harder and is I fully believe a most Christian man. He thinks us a sad lot of rogues and I have no doubt is justified according to his lights.” (p.153)
When he looks in the face of horror, he still sees it in the light of enemy barbarity and the gallantry of his fellow English soldiers. Consider his vocabulary in the following entry, from 3 June 1916. May has just returned to the front line from leave, and sees the bodies of dead comrades hanging over German barbed wire on the other side of No Man’s Land. The German is a very devil, whereas the dead English soldiers have made the “Supreme Sacrifice”. The entry reads thus:
“We are in the line again, but it is a sad incoming. Poor Street, Cansino and one other unidentified can be plainly seen tangled in a heap among the German wire, right under their parapet. A Boche sentry is mounted over them and keeps popping his head up every now and then to have a look at them. I saw him first through the telescope and the sudden apparition of his great face caused me to think him a fiend of hell gloating over his victims. The poor fellows are quite dead. It is evident now that Cansino, hearing Street was in difficulties, went to help him and was killed in the attempt. It is one more case of the Supreme Sacrifice. The boy did well.” (p.190)
Where is the irony in this? Simply in subsequent history, which has made Charlie May’s sincere convictions and worldview seem woefully antique. We simply cannot look at war now as he did.
I do not think that To Fight Alongside Friends is a book to give startling new insights into the First World War, nor even to give us a vivid sense of what happened to one soldier. But as the expression of attitudes that once powered millions of men, it is an interesting historical document.
Posted by Unknown at 9:02 AM

Email ThisBlogThis!Share to TwitterShare to FacebookShare to Pinterest
Labels: Charlie May, Greece Crete Stalag Dachau, Jack Elworthy, Something New, To Fight Alongside Friends