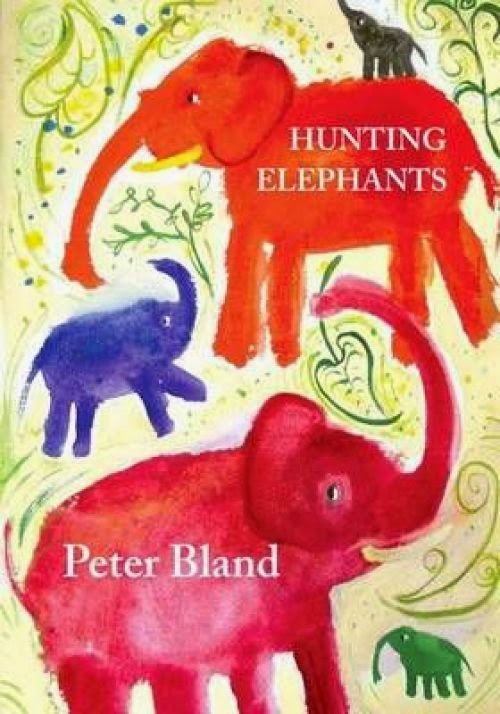 Early in 2013 I had the pleasure and privilege of reviewing on this blog Peter Bland’s Collected Poems 1956-2011 [look it up on the index at right], and I took the opportunity then to say a number of things about Bland’s place in NZ Lit and culture – the co-founder of Downstage Theatre; the ebullient actor and director; the Pom who came to New Zealand in the 1950s, returned to England and came back to New Zealand a number of times before finally settling here permanently; and above all the man who observed New Zealand closely, but without joining the “nationalist” poetic fashions of his early days in this country.
Bland’s poetry showed that he knew what life was like in New Zealand alright - but he had enough detachment to see it in the greater cosmopolitan frame. Reviewing Bland’s last separate collection Coming Ashore for the 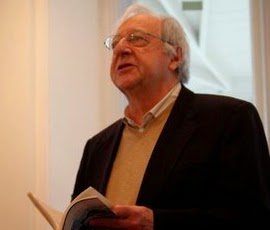 Listener, I noted that Bland’s themes were consistent ones, but he was now more aware of his age.

This is even more true of his latest collection Hunting Elephants, fifty pages of pithy poems. I love a man who, now at the age of 80, can still wield imagery like a scalpel, can be surreal and playful, can be wistful without self-pity even if he has quite clearly heard the chimes at midnight. This is a book filled with references to a possible paradise, with memories, with dreams, and even with the odd tentative speculation that there might actually be something beyond death.
In many of these poems I detect a “gander without a goose” (to adapt James K. Baxter’s phrase) as Peter Bland recalls his late wife Beryl, to whom he dedicates one sequence of poems. There is “a moon worn out with loneliness”  (in the poem ‘The outer courts of paradise’). There is a dreamy desire to ride elephants to paradise (‘Hunting elephants’) and the triptych to Beryl where he wishes he could “leave the road ahead / to look after itself / and loll like caliphs / in our noonday bed.” (‘Afterlife’). He still hums tunes that “she” taught him to hum “a lifetime ago” (‘Ripe Pears’). He hankers after “my co-pilot, my loyal companion” in “the house that is a lonely spaceship” (‘Spaceship’). He meets his wife in a dream (in the prose poem ‘There you are’).
So being a widower, and an old widower, looms large in the Bland-osphere. But old age itself, and its consolations as well as its weaknesses, is as much Bland’s territory.
There are poems about being a ‘Homebody’ and the pleasure of doing nothing and a poem about watching ‘Porn’ (poor old beggar) and a dream about Baxter where “I remember how / it was always sex / or the sacred / that brought him / /to his knees.” (‘Discovering Jim Baxter…’) and about getting used to living in a silent house with memories (‘Holding It Together’) and a prose poem called ‘Locality’ about how Dominion Road can itself be constructed as a poem. He also reflects that, at an older age, daydreams are things that can only be imagined, not lived (‘Idylls’). I wonder if the ‘Scarecrow’ (“wearing Mum’s old hat”) is a portrait of the poet as inanimate object, growing older and more battered as he moves from scene to scene.
When he comes to poems about art, Bland is concerned with the artist’s intention and his technique – questioning both, whether it be Cezanne seeing nature as the same in its changeability (‘Cezanne’s Apples’) or a still-life teasing the viewing by its absences (‘An infinite meantime’)
Five poems feature the familiar Mr Maui, but the one called ‘Mr Maui among the archetypes’ turns him to Bland’s new purpose of celebrating or lamenting or regarding quizzically the phenomenon of being old; for among the archetypes “My / favourite’s an old man / trying to be holy / while surrounded by devils / and naked nymphs. You have / to laugh, he’s so far / past it…”
It occurs to me that in this sad excuse for a review, I have banged away at the poet’s age. I wouldn’t deny that this is an old man’s book, but I do not mean that in a negative and demeaning sense. I am not saying that Bland is producing the same old same old – only that the poet knows his own most fruitful subject matter. And I also note that Bland is still capable of springing surprises that seem quite out of character. Consider in this volume his version of Villon’s ‘L’Epitaphe’. The original is a ballade in three stately stanzas with an Envoi at the end. Bland (who works mainly in free verse or prose poems) transforms it into 12 couplets, colloquial and spare and yet still giving that medieval starkness in its account of the hanged awaiting God’s judgment. He calls it ‘Ballad of the hanged men’ and it is one of the best things in the book. 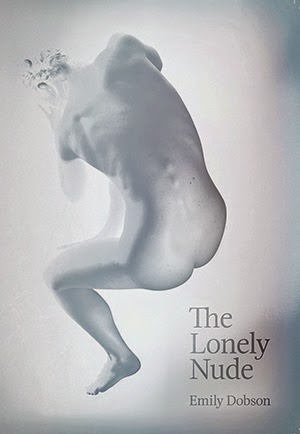 If Peter Bland is a poet in very late career, Emily Dobson is still almost a starter. The Lonely Nude is her second collection.
Is it because I am male that I found the poem which appeals most to me in this volume to be ‘Construction man’? It reads, in its entirety:

with a white hard hat,
a hammer
and a measuring tape.”

What do I like about this simple and effective poem?
Its desire for certainty and its sense of a solidity, which I find to contrast with much of the content of The Lonely Nude. Also its sense of weighing and measuring the visible world.
In different sections, Emily Dobson touches on her experience as a nude model for art students, her travels in Mexico and the United States, the seasons and her eventual return home where (to quote another poem – ‘The fig at home’ – in its entirety):
“The fig at home
always dropped its fruit
too soon”
With all the wealth of sensual experience her travels would presumably entail, however, Dobson writes in such a spare style that her brief poems become almost cryptic. What is being said? I am not sure. There is a kind of detachment from physical reality. In this, I am not wilfully misrepresenting this collection. Breaking a long habit, I quote the VUP blurb, which tells me that “even as she travels into the world, [she] feels increasingly disconnected from it”. Quite so. The only literary comparison that comes readily to hand for me are those passages of Mrs Dalloway where Virginia Woolf has her main character look at London and suddenly find it insubstantial, incorporeal, as if it is floating and not solid reality. The style is so cerebrotonic that it washes physicality out.
I am sure this is a genuine worldview for many people, but (except in the odd moment of detachment) it is not one that I can share easily.
It is, however, quite wrong to judge literature solely in terms of one’s sympathy for its worldview. There is an audience for Dobson’s pithiness and floating, incorporeal consciousness.
Posted by Unknown at 9:02 AM