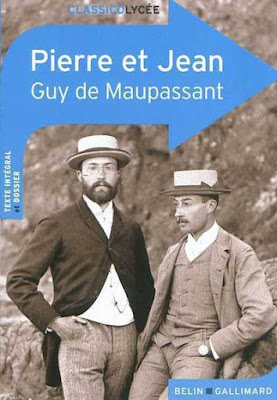 What is the general reputation of Guy de Maupassant (1850-93) among English-speakers?
To most Anglophones I think he is best, and perhaps exclusively, known as a short-story writer. Sometimes you find ill-informed textbooks telling students that de Maupassant wrote only sting-in-the-tail short stories, and evidence of this misconception is found in his famous story La Parure (The Necklace) with its surprise ending. In retaliation, de Maupassant translators and scholars are at pains to point out that such stories were only a small part of de Maupassant’s output. The Penguin Selected Short Stories of de Maupassant, which sits on my shelf, has the translator Roger Colet pointedly excluding The Necklace from the selection because, he explains, it is so unrepresentative of de Maupassant’s 300-odd short stories. For the more informed Anglophone reader, de Maupassant is known as the purveyor of ironical, and sometimes cynical, realist narratives, just a whisker away from Zola’s naturalism. His masterpiece (I remember it from Stage 2 French) is often said to be one of his very first works, the long short story Boule de Suif, with its Franco-Prussian War setting and its ironical account of a prostitute’s exploitation by self-interested people. Flaubert, de Maupassant’s literary mentor, proclaimed it a masterwork as soon as it was first published.

Focus on the short-story writer, however, ignores the fact that de Maupassant was also a novelist. He wrote six novels. The only one to gain much traction with English-speakers seems to be Bel-Ami (1885), the chronicle of a cynical journalist sleeping his way to the top. It was once made into a (bowdlerised) Hollywood film. In France, de Maupassant is as well known for the novels Une Vie (1883) and Fort Comme la Mort (1889).
And then there is Pierre et Jean (1888) which French connoisseurs regard as his best, even if English readers hardly know it. (Apparently there is an Oxford World’s Classics translation.)
Now what brings me to write about this particular novel?
Sheer serendipity. In Paris recently, and looking for something manageable to read, I found a good copy of Pierre et Jean in a second-hand bookshop, going for the princely sum of one euro. I snapped it up and enjoyed it in brief moments from travel. It’s a short novel (de Maupassant’s shortest by a nose) and easily read, and as I interpret it, it has a central situation rather than a plot as such.
Thus it goes.
Monsieur Roland is a retired Parisian jeweller, living with his wife Louise in Le Havre. He loves playing at boats, going out frequently on fishing expeditions with a Captain Beausire. He is the epitome of a city businessman in retirement, imagining he is some sort of adventurer.
M. and Mme. Roland have two very different sons. The elder – aged about 30 – is the dark-haired and rather saturnine Pierre, a doctor, who is pensive, laconic, brooding and more than a little cynical. The younger – in his early 20s – is the fair-haired Jean, genial, loquacious, sociable and a lawyer with a fairly uncomplicated view of life. Attached to this small family there is a wealthy and still-young widow, Mme. Rosemilly. Her late husband was a sea-captain, which is one reason why the sea-loving M. and Mme. Roland chose to socialise with her. In a vague sort of way, Pierre and Jean are rivals for her hand and her wealth.
All this is established in this short novel’s opening chapter. Whereupon the Rolands are jolted by the news that an old family friend, M.Marechal, has died and has most unexpectedly left his whole legacy to the Rolands’ younger son, Jean.
At first Pierre congratulates Jean on his good fortune, but then jealousy begin to gnaw at him. As his black moods increase, he suspects that Jean can only have been bequeathed the legacy because he is really M.Marechal’s illegitimate son by an adulterous affair with Mme. Roland.
De Maupassant writes in the third person, but for most of the novel we see things exclusively from Pierre’s viewpoint as he rationalises his jealousy. His suspicions of his mother’s adultery grow to a certainty. It is clear that Pierre is not a very sociable person – his only friend is the Polish pharmacist Marowsko, who is dependent upon the doctor Pierre for his customers. It is also clear that Pierre is far more aware of social and financial realities than Jean is.
How does it all end? I will provide no spoilers, but there are intense scenes between the mother and each of her sons; and a downbeat ending. One could compare the tale with other classic stories of contrasting and rival brothers (Balzac’s La Rabouilleuse, for example, or Stevenson’s The Master of Ballantrae), except that de Maupassant’s realism makes him concentrate on credible observation rather than melodramatic turns of a plot. This is at its best as a study in jealousy, its most striking scenes being those where Pierre keeps imagining what he could do with an inherited fortune, such as setting himself up in a more opulent surgery than the one where he works.
As far as verisimilitude is concerned, the chief flaw in the story is the thinness of M. Roland’s character. Being such a gormless caricature, he contrasts with his intense and emotional wife and her intense and emotional sons. One has to suspend an awful lot of disbelief to accept that he has never suspected what his two sons so easily find out. Yet M. Roland is very much in the mould of so many married men in de Maupassant’s stories. They tend to be harmless or foolish dupes who are unaware that they are being cuckolded or otherwise deceived behind their backs.
Reading this trim and accessible novel, I kept considering the time in which it was 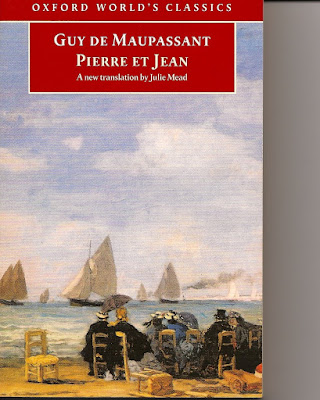 written. 1888. The late nineteenth century. The age when middle-class people in Europe were just getting used to seeing the seaside as a holiday resort and to boating and sea-bathing as delightful pastimes. Inevitably, memories of all those impressionist and pointilliste paintings of bathers (Seurat, Renoir etc.) swept before my eyes as I read, especially as de Maupassant makes so much atmospheric use of the sea, the weather and the moods of the harbour to echo Pierre’s moods as he wanders about brooding.

And yet one still has the impression of a naturalist situation spun out until the fierce conclusion between mother and sons.
So was de Maupassant really better as a short-story writer than as a novelist?
Just as we are about to ask this, however, we are trumped by the excellent polemical introduction which de Maupassant wrote for Pierre et Jean. He argues that critics too often expect novels to do the same thing, no matter who is writing them. The introduction is one of the best pre-emptive biffs I have ever seen a writer throw at potential critics, and leads me to reconsider and ask – what, after all, is wrong with a novel that is as much reflection upon a situation as a march of events? Hawthorne wrote such a novel in The Scarlet Letter and really all Kafka’s novels have a similar conception. So why can’t we enjoy de Maupassant’s use of the form?

Sensible footnote: Having read this novel, I owe to Francis Steegmuller’s ancient study of de Maupassant (Maupassant, published in 1950) the knowledge that Pierre et Jean was regarded as “faultless” by Henry James and was much admired by Vincent van Gogh. Steegmuller also points out that this (largely) sober, rational and realistic novel was written after de Maupassant’s story of madness Le Horla, which has sometimes been falsely assumed to signal de Mupassant’s own final descent into mental breakdown.

Silly footnote: Reading the French text, I was foxed by the word “salicoques”, which the male Rolands were said to be hunting on night expeditions. I guessed it referred to flatfish or flounder. But it turns out “salicoques” are prawns.
Posted by Unknown at 9:01 AM