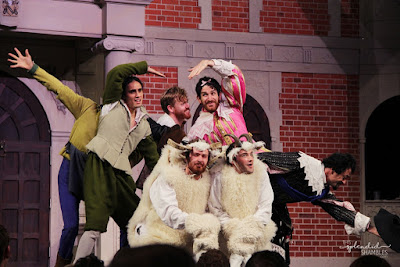 Very well, we said, we enjoyed the Pop-Up Globe’s rendition of Henry V, even if it coarsened up the comic scenes somewhat and laid on the crudities. So let’s see what they can do with As You Like It, especially as it had the same cast.


So along we trotted.


We were quite comfortable with the fact that, as in Shakespeare’s time, all roles were played by men. Rosalind and Celia were men playing women who disguise themeselves as men, and this transvestite thing was part of Shakespeare’s original gag anyway.


We knew that the fun and games would be played up and we admitted that most of the audience lapped it up.


But – oh dear! – how far so much of it drifted from Shakespeare. There was even one point where an actor, having indulged in much slapstick with men disguised as a herd of sheep, said “Alright, now back to Shakespeare”.


And – oh dear! – how coarsened it all became. Orlando does not go about the forest pinning love sonnets to the trees. Instead he goes about reciting bits of current pop songs, so that the young audience can sing along. As often as Shakespeare had some subtle sally of wit, so often would it be replaced by a bum or cock joke and some physical business. To include the obligatory gay element, the peasant William does not pine for Phoebe but for Phoebus. Hymen, God of Marriage, did descend at the end (very camped-up), but in this production, love was not the prelude to marriage. It was at best the prelude to sex. In fine, this wasn’t Shakespeare’s courtly romantic comedy, but a late-evening sitcom with some echoes of Shakespreare therein.


I repeat, much of the audience loved it. As they have been taught to do by American sitcoms, a claque of teenage girls near the apron stage went “Woo-woo-woo” hysterically whenever something “transgressive” (like a kiss between two men) happened. And as we were leaving, we overheard one of their number say “I can’t really follow the plot. I just came for the comedy.” By which she clearly meant the slapstick interpolations.


Okay – I know what you’re thinking. I sound like a retrograde grumpy old man who isn’t up with the latest theatrical practice. Why, I must be so dense as not to understand that productions like this are trying to win a new and younger audience. They are trying to make Shakespeare “relevant” to a new generation.


To which I reply – Bollocks and poppycock.


Taking the long view, I say this sort of shananigans will, in a few centuries, be remembered the same way that we now remember the 18th century re-writes of Shakespreare by the likes of Nahum Tate – as a crude attempt to make a great dramatist reflect the prjudices and tastes of a coarsened generation.


I know. I know. I’ve said similar things about trendy opera productions (see the post Murder at the Opera). But I am cursed with this habit of reporting realities.
Posted by Nicholas Reid at 9:00 AM

Email ThisBlogThis!Share to TwitterShare to FacebookShare to Pinterest
Labels: Making It Relevant, Something Thoughtful