DON’T CANONISE THEM UNTIL THEY’RE DEAD 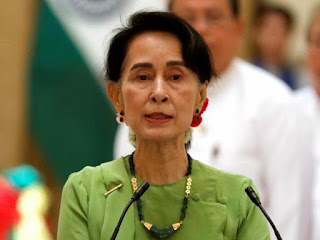 There’s a very sound lesson that most religions learnt long ago.
Don’t canonise anyone until that person is dead.
If you start calling a living person a saint, that person might just go on to do unsaintly and reprehensible things. Much better to wait until that person is safely dead and buried and the record of a complete life is available. Then, if no copybook has been blotted, that person may be safely canonised.
In this secularised world, some people think we are beyond the concept of sainthood. Not so. See how names such as Mahatma Gandhi, Nelson Mandela, Abraham Lincoln or Martin Luther King are always invoked as touchstones of human goodness and the highest human aspirations (not always justifiably, I’d have to add).
But what a problem we create for ourselves when we start speaking of “living saints” and make an icon out of somebody who is still alive.
Item – 26 years ago, in 1991, Aung San Suu Kyi, then aged 46, won the Nobel Peace Prize. All right-thinking people in the West revered her. She was the lady from Burma who stood up to that country’s military junta and called for a return to democracy. (NB – few people in Burma call the country Myanmar, which is a name imposed by the military junta). Always dignified in her demeanour when she appeared in interviews, she promoted non-violent protest against the military regime and suffered house arrest. Who wouldn’t admire her?
I admit that I was as impressed by this image as everybody else I knew. Six-and-a-half  years ago, when I began writing this blog, I produced an enthusiastic review of the Swedish journalist Jesper Bengtsson’s book about Aung San Suu Kyi called Strugglefor Freedom.
So what happened to call this image into question?
Now aged 72, Aung San Suu Kyi is the de facto political leader of Burma, even if she has an uneasy alliance with the military, who still control some major ministries. The Burmese military has been carrying out what is internationally recognised as “ethnic cleansing”. Over 450,000 Rohingya Muslims have so far been driven out of Burma and have fled to neighbouring Bangladesh, as their villages have been burned down and their livestock impounded.
Aung San Suu Kyi’s reaction has been to support the military.
Discreetly cancelling an appearance she was going to make at the United Nations – where she might have had to answer some awkward questions – she has preferred to make, from her home base, the sort of ambiguous statement about violence “on both sides” that is beloved by those who are perpetrating violence. She has accused the international press of exaggerating the Rohingya Muslims’ plight and has done her best to suggest that the army was simply quelling an armed uprising. There has been a widespread movement in Europe to have her Nobel Peace Prize revoked.
One undertone in all this which I find very interesting is the assumption many make in the West that, Buddhism being a peaceful religion, a Buddhist majority like that in Burma would not approve of state violence. Some real study of history would soon disabuse people of this view. In Asia, Buddhist populations have been as ready to resort to arms as Hindu, Muslim, Taoist, Confucian, Shinto, Sikh, Jain, Parsee or any other populations. And Aung San Suu Kyi is clearly one who sees a non-Buddhist minority as not being “real” Burmese citizens. She is a nationalist in the strictest sense of the term.
There is one lesson we can take from this. We should always look at the fine print when we start nominating people as saints or heroes. (See my post The Bad Against the Worse on the way the doctrinaire neo-liberal Emmanuel Macron became the darling of the press, simply because the opposing candidate was clearly so much worse.)
More to the point, though, we should follow the church’s example of not canonising anyone until the coffin is buried or the ashes scattered. After all, the whole life of Aung San Suu Kyi could see her changing her mind, condemning the army’s actions and reasserting the rights of a minority.
Until that happens, however, she is firmly off the calendar of saints.
Posted by Nicholas Reid at 9:00 AM

Email ThisBlogThis!Share to TwitterShare to FacebookShare to Pinterest
Labels: Don't Canonise Them Until They're Dead, Something Thoughtful