“MY LIVES” by Francis Meynell (first published in 1971) 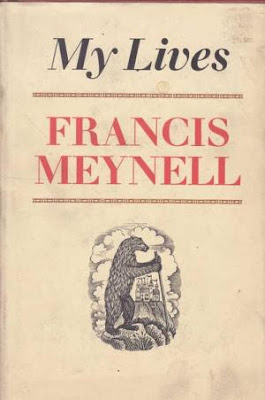 It is rare to read a book whose author clearly, egregiously and unwittingly reveals himself to be a completely insensitive ass. I am about to introduce you to a book which you will never read, written by someone of no particular interest to you. Years ago, in the days when I used to trawl second-hand bookshops, I would sometimes look out for books that might be of interest to my old friend and neighbour (now long dead) the craft printer Ronald Holloway. The name Meynell on the cover of one such book drew my attention, as I associated the name with printing. So after I had scanned the blurb, I bought the book with the intention of handing it on to Ron – which I eventually did.
But first I read it myself.
In some places I had to restrain my incredulous laughter. In others I gasped at the self-satisfied pomposity of the author.
Let me orient you to the book.
My Lives is an autobiography written by an octogenarian. Francis Meynell was born in 1891, the youngest child of the Catholic poets and publishers Wilfred and Alice Meynell. Viola Meynell, the short-story writer and poet, was among his older siblings.  Francis Meynell himself rapidly became an agnostic. He was three times married and twice divorced. His second wife, Vera, killed herself a few years after their separation. He stayed with his third wife, “Bay” (Alix Kilroy), for the last 40 or so years of his life. His big achievement (I might almost say his only achievement) was founding the Nonesuch Press in the early 1920s – a press devoted to producing upmarket editions of out-of-the-way English classics. (A sound – if somewhat battered – Nonesuch edition of John Donne sits on my shelves.) Francis Meynell also had some fame, in specialist circles, as a typographer and designer. 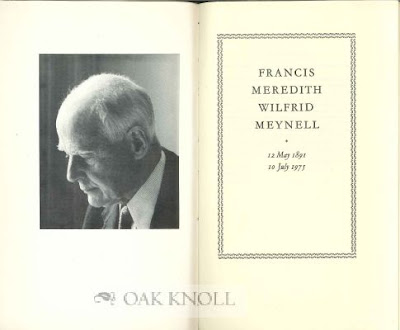 Email ThisBlogThis!Share to TwitterShare to FacebookShare to Pinterest
Labels: Francis Meynell, My Lives, Something Old