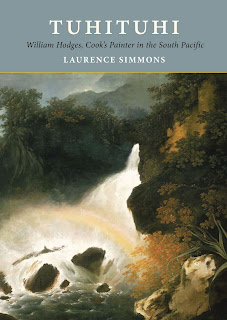 We live in an age where European interpretations of the Pacific, its history and its cultures are no longer taken for granted as objective records of reality and are no longer unchallenged. This is especially true of descriptions of “first contact” and cultural interaction at the time when Europeans were first exploring the Pacific.

Last year I had the pleasure of reading both Anne Salmond’s Bligh – William Bligh in the South Seas and Joan Druett’s Tupaia – The Remarkable Story of Captain Cook’s Polynesian Navigator. Salmond’s account of the luckless captain [you can find my comments on Bligh via the index at right] adopted a very even-handed anthropology, glamourising neither the Pacific peoples nor their European visitors, but making it perfectly clear that Europeans often misunderstood or misinterpreted Pacific mores. Druett’s book [my review of it appears in Landfall 223] told of the Tahitian nobleman who was on the essential Pacific legs of James Cook’s 1769-70 Endeavour voyage. Again, it suggested many European misunderstandings of the Pacific.

This revisionist view is powerful and persuasive, although there is always the problem that, having no written language, the Pacific peoples have not left us any records of how they felt about, or interpreted, the first generation of Europeans they met. Speculation and inference are therefore inevitable parts of even the most well-researched attempts to recreate the human and cultural elements in European Pacific exploration. We know what the visiting Europeans thought, because they wrote diaries, letters, logs and memoirs. We have to guess what the Pacific peoples thought, or rely on oral traditions which are inevitably inflected by the interpretations (and failed memories) of later generations.

Laurence Simmons’ Tuhituhi is very generally in the same ball-park as the Salmond and Druett books. This is an account of the English artist William Hodges, taken on Cook’s 1772-75 Resolution voyage as official landscape painter. According to Cook’s diary (as quoted on the back cover) “Toetoe” or “Tuhituhi”, meaning painting or marking, was the name Maori gave Hodges when they saw him at work. The book is organized into separate chapters chronologically, according to the successive landfalls of the Resolution between March 1773 and September 1774. Thus it moves in order from Aotearoa/New Zealand to Tahiti/the Society Islands; backtracks to take in the Resolution’s two forays into the chilly, iceberg-laden Southern Ocean; then moves on to Rapa Nui/Easter Island, Te Fenua’Enata/the Marquesas, Vanuatu/the New Hebrides and Kanaky/New Caledonia.

Simmons, head of the Film, TV and Media Studies Department at the University of Auckland, is certainly interested in the Europeans’ cultural perceptions of Pacific peoples; and Pacific peoples’ cultural perceptions of Europeans. But more than anything he is interested in Hodges’ art as an example of a European intelligence trying for the first time to take in the radically different landscapes, seascapes and cultures that the Pacific offered. Like any artist, Hodges carried with him preconceptions of how external reality should be represented, and was informed by specific European art traditions and conventions that shaped how he saw things.

Simmons at once signals to us what a unique individual Hodges was. His introduction gives a brief biography of the man who won respectability as an artist after coming from a humble background; and who may or may not have committed suicide, after financial reverses, years after he had returned from the Pacific. But the introduction also contrasts Hodges’ portraits of Cook and Mai (“Omai”) with the better-known and more romanticised images of these two men created by Nathaniel Dance and Sir Joshua Reynolds. Hodges saw neither the “Noble Savage” in Mai nor the civilizing European “Great Man” in Cook. His portraits bear the mark of somebody who does not idealise his subjects, but who knew them better than the other artists did, and in circumstances other than a portrait painter’s studio.

Simmons’ introduction further tells us his own method. “In each chapter”, he says “I have concentrated on an individual painting which I take as emblematic of the work Hodges did in each location.” Thus it proves as, chapter by chapter, we follow the Resolution’s course around the Pacific. One painting for each location is analysed in great detail, but with reference to the other work Hodges also did in that location. Simmons further notes that his main purpose is historical, not in the sense of art-history, but in the sense of “ethnohistoriography”. What do these paintings say about the state of culture and of cultural perception?

In this spirit, then, Simmons picks apart Hodges’ View of Pickersgill Harbour (Dusky Sound deep in the South Island) to reveal how Hodges’ chosen viewpoint is intended as a bridge between the known and the unknown – a way of  bringing the viewer into a totally unfamiliar landscape. Hodges’ depictions of rainbow-covered waterfalls and of waterspouts in other New Zealand-originated images lead Simmons to examine 18th century, Enlightenment view of the “sublime.”

When Simmons views Hodges’ Tahiti Revisited (1776), where naked and tattooed Tahitians occupy some of the foreground while “sublime” Tahitian mountains and trees stand in the background, he analyses it in terms of what it says about sexuality. For Simmons the landscape the artist depicts is, in effect, an extension of the bodies in foreground. This leads him into a long and nuanced account of the sexualization of Pacific landscapes by European artists, informed by mistaken notions of Pacific peoples as hedonistic and un-trammelled by any reproving sexual morality (the sort of thing that led to fantasies about available “dusky maidens”).

By contrast, Hodges’ very large canvas The War Boats of the Island of Otaheite [Tahiti] makes Simmons consider how the indigenous implements of war modified such European dreams of the Pacific as an idyllic paradise. Simmons alludes to the background of contemporaneous [18th century] European wars and how the martial virtues were seen by Europeans such as Hodges.

We are shown how Hodges’ images of southern icebergs fed into British theatrical design – the almost expressionist shapes he gave to the ice were the paradigm for many backdrops.

Hodges’ A View of the Monuments of Easter Island (1775) drew on the European tradition of memento mori and the concept of death such as that presented in Poussin’s Et in Arcadia Ego. Even Death is present in a perceived paradise. Hodges’ painting of the Easter Island monuments is organized to emphasize impending doom (dark storm clouds lour in the background) with a human skull near the foreground. It could be taken as an elegy for something dead or dying, or for a grandeur that was gone from Easter Island. But Simmons also reads it as a painting catching this particular moment in European apprehension – the realization that the Pacific was not an eternal present or an unchanging myth; but that cultures grew and decayed there too.

Later, Simmons links three separate views by Hodges of Cook’s landings in New Hebrides with reflections on the nature of first contact and on the way indigenous peoples viewed the pale-faced newcomers. Ultimately this leads him to consider cargo cults in 20th century, citing an ingenious anthropologist’s argument that they are really ways of keeping indigenous culture alive.

The very last chapter of Tuhituhi attempts to relate Colin McCahon’s stylised 1964 paintings of waterfalls with Hodges, whom McCahon declared to be one of his influences.

Tuhituhi is a book of great scholarship. Numerous critical and historical sources are cited. It is a book of very close successive readings of each painting. There is much technical detail on the circumstances in which each work was produced; some purely aesthetic appreciation; and comparisons with other of Hodges’ works, many of which are also reproduced in the text.

Tuhituhi is also a work of interpretation. Simmons is very fond of seeing landscape paintings as metaphors for the human condition or (one of his favourite terms) as synechdoches, where a particular image stands for the whole phase through which human society was passing at the time the image was produced. This approach could be contested as “reading into” many images abstract values which are not necessarily there. Or it could simply be an elaboration of the truism that an artist will somehow channel the Zeitgeist of the age in which he lives. Either way, Tuhituhi opens up the consciousness of this particular artist and clarifies the context of his works. There is nothing “innocent” about their images.

I have only one criticism of Tuhituhi as a piece of book production. I think the reproductions of the key paintings that are analysed could have been larger, for ease of reference – perhaps by being printed vertically rather than horizontally, so that their rectangular shapes took up the whole page. Occasionally I found myself straining to identify those very features upon which Simmons was commenting.

Apart from this quibble, Tuhituhi is a handsome hardback which integrates its many illustrations (maps, charts, sketches and photos as well as paintings) into the generous and detailed text.
Posted by Nicholas Reid at 9:02 AM