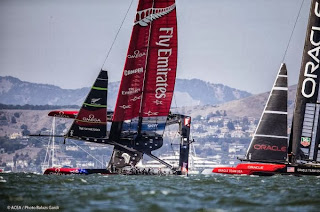 When they were winning, it was all the skill of the crew and they represented New Zealand and there was going to be a huge impact on New Zealand’s society and economy and this would lift our profile and show the world what we are made of.

When they lost, at once the commentary switched to saying that it was just a matter of technology and the guys in the other boat had more money behind them.

When the whole thing was being played out, people were filling a covered wharf in Auckland and looking at a big TV screen and variously cheering or groaning or making noises that might have been more appropriate to certain forms of sexual intercourse. And there were all those flag-wavings and little vox pop cut-ins. The one that really got me was of a little girl (8? 9?) saying fervently that she really “believed” in Team New Zealand, with a look of trust and innocence on her face. She had been cued to believe that this was really important stuff.

I’m not going to give you an anti-sports rant.

I respect and esteem much of the commentary on world affairs that Noam Chomsky has given over the years. But I do once remember him saying something that I would regard as rank conspiracy theory. This was when he opined that the space which the media devoted to sport was simply a stratagem by governments to distract the general public from really important issues. Being (as you are, dear reader) a middle-class person who fancies himself as an intellectual, I would be happy to believe this is true, because it would justify my own lack of interest in sport and make me feel superior to the gullible masses. But I think on this one Chomsky struck out badly. The simple fact is that a huge part of the population really is interested in sport and good for them. It’s not a conspiracy or dark governmental plot. Like sex and various forms of recreation and entertainment, sport is something that plays big in the media because there is a ready market for it, even if it can then become a distraction from more important issues.

So there’s a keen interest in sport, which I do not share. This does not make me superior to sports lovers. It just means I have different tastes.

But I’ve still got to take issue with the sports cult, especially as it relates to international competitions like the Americas Cup.

First, sport is often publicised as something making for health and wellbeing. When one sees rival teams in action, goes the argument, one is seeing a competition of skill, strength, stamina, fitness and so forth. This may be true of footraces, athletics and games of rugby or cricket (once drug-taking, cheating and match-fixing are duly filtered out). But it becomes much less true of any competition in which sophisticated technology is involved. Yes, I’m sure an incompetent Formula One racer could misjudge the hairpin bend and crash his car. Yes, I’m sure an inept crew could capsize a racing catamaran. The human beings do count for something. But individual skills are only part of the equation when they are riding multi-million-dollar kit. The expensive kit itself is a major factor and often the deciding factor. (And if you disagree with me on that one, then ask why, immediately post-defeat, New Zealand media started suddenly talking about the New Zealand engineering firm that made the Oracle craft.) Doubtless the quality of the soles of a runner’s shoes also has an impact on a footrace’s outcome, so if you wish to be very clever you could say that technology is involved there too. True – but the importance of technology is proportionally far less in a footrace than it is when human beings are simply adjuncts to a machine. And so is the importance of money.

Second, the notion that international sporting competitions have a huge impact on any nation’s economic wellbeing is a vast overstatement. Repeatedly, New Zealanders have been told that such things as hosting the Rugby World Cup, or the Americas Cup, would give a major boost to the economy, create jobs etc. etc. But always, when the dust has settled, sober economic analysis shows that this is not the case. To begin with, international sporting competitions always begin with their hosts in economic deficit – they have to spend millions on infrastructure, upgrading facilities and venues and so forth. To go on with, the only people who materially benefit, should a competition be hosted, are very small section of the community – hoteliers, tourism companies, media outlets holding broadcasting rights, perhaps engineers who design and build racing craft. Economically the community at large does not profit materially. There was no major upturn in the economy after New Zealand last hosted the Rugby World Cup. There would be no major upturn in the economy should New Zealand have been in a position to host the next Americas Cup. You may object that money, profit and the economy are not what sports competitions are about. They are about entertaining or uplifting or inspiring the community. Fair enough. This might be a valid view. But if it is, it negates all the (false) things I’ve heard and read about the economic advantages of international sporting competitions.

And now I come to the third and, for me, most important point. This is my objection to the notion that sporting competitions define what a nation is, or define its greatness.

I could note that, frankly, most of the world isn’t interested in rugby or in the Americas Cup. In New Zealand, there were anguished complaints of how much foreign media ignored the event when the recent catamaran races were on, but the reason is obvious. Most of the world doesn’t care. New Zealand can excel and beat the world in a range of minority sports (like rugby, cricket and yachting). But this is only because most of the world doesn’t play them. So in using rugby (or yachting) matches to advertise New Zealand’s prowess, or lift New Zealand’s “international profile”, New Zealanders are really saying that New Zealand is a part of the little league, which cannot win in the truly international sports. It makes not a whit of difference that playing these minority sports is sometimes regarded as “playing to our strengths”. That particular cliché phrase is really just a sunnier way of saying what I have already said about minority sports. (New Zealand is not unique in this, of course. Americans who focus their lives on baseball or gridiron are focusing on things that interest few other nations.)

All that last paragraph is, however, secondary to my real objection. In a post-religious age, sport is presented as something that can “bring the nation together”. People once thought they were being facetious when they said that sport was New Zealand’s real national religion, but they spoke truer than they realized. Those public rituals of joy in victory and sorrow in defeat. That little girl who said she really “believes” in Team New Zealand. Those tribal face-paintings and waving of fetishes before the test matches. What are they but religion substitutes?

Remember, I say none of this in an anti-sport fashion. As I noted above, if people choose to enjoy sport of any sort, then good for them. But let’s not pretend that it is anything other than a pastime – and often a pastime supported by, and dominated by, big money. It is not the definition of a nation. It is not a religion. And it is not something that all of us follow.

So perhaps I should get a discount on my taxes for the big public subsidy that went into the latest contest of technologies?
Posted by Nicholas Reid at 9:00 AM

Email ThisBlogThis!Share to TwitterShare to FacebookShare to Pinterest
Labels: NOT MY RELIGION, Something Thoughtful