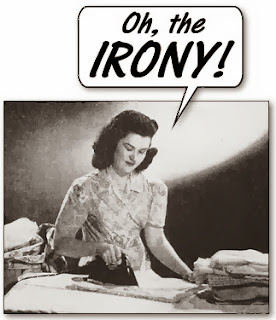 There are a couple of words that trouble me for two separate reasons.

The words are “irony” and “ironic”.


The first reason is that they are so hard to define.

“Expression of one’s meaning by language of opposite or different tendency, esp. simulated adoption of another’s point of view or laudatory tone for purposes of ridicule; ill-timed or perverse arrival of event or circumstance in itself desirable, as if in mockery of the fitness of things; use of language that has an inner meaning for a privileged audience and an outer meaning for the persons addressed or concerned (occas. including speaker); SOCRATIC irony = simulated ignorance.”

This isn’t bad (sorry to sound as if I’m patronising the OED) although parts of it could easily be defining something else. For example the bits that say “expression of one’s meaning by language of opposite or different tendency… laudatory tone for purposes of ridicule ” could just as well be defining “sarcasm”, as in saying “That was really clever of you, wasn’t it?” when somebody has just made an idiot of him/herself. Indeed, there are times when I think that much irony, and especially Socratic irony, is just a refined form of sarcasm. A writer like Thomas Mann may be an ironist when it comes to human nature, pulling people apart psychologically without ever directly appearing to do so. Fair enough. But put irony into the hands of a polemicist (Gibbon talking about the origins of Christianity in The Decline and Fall of the Roman Empire, for example) and all you really have is an elegant sneer. Polysyllabic sarcasm.

I’m therefore more attracted to the next part of the OED’s definition of “irony”: “ill-timed or perverse arrival of event or circumstance in itself desirable, as if in mockery of the fitness of things”. Whenever I’ve been tempted to say “That’s ironic”, it has been in response to such circumstances. “It’s ironic that after a lifetime of buying lottery tickets, she died just the day before she for the first time had a big win.” “It’s ironic that he finally got around to mowing the grass verge the day before the council’s diggers came and dug it up.” That sort of thing.

Back in 1996, the angsty pop warbler Alanis Morissette produced a song called “Ironic”, purportedly listing the ironic things she had encountered in life. Most of them were by no manner of means ironic, leading one wit to say that the most ironic thing about the song was that it was written by somebody who didn’t know what irony was. This was true in part, but just a little unfair – at least some of the things Morissette listed were the type of “ill-timed….event…in mockery of the fitness of things” that the OED suggested.

And yet even this doesn’t really seem to me to get at what irony is. I am aware that learned treatises have been written on this topic, and hairs have been split about different types of irony. I am aware that the third part of the OED’s definition (“use of language that has an inner meaning for a privileged audience”… etc.) often indicates circumstances in which educated people are enjoying themselves by looking down on the dumb unwashed masses, who don’t “get it” (another example of irony as sarcastic sneer). And I am still dissatisfied about all the definitions of “irony” that I have so far cited.

It seems to me that irony, more than anything, is a tone of voice; a way of indicating a disjunction in reality; a lack of connection between intentions (or expectations) and outcomes. But even in saying this, I am beginning to waffle and miss the mark. I think I can see or smell irony when I encounter it, but I’m having a hard time defining it. After objecting to received definitions of irony, that’s ironical. Damn.

Now for my second reason for being troubled by the words “irony” and “ironical”.

I am troubled that irony is often used as an excuse for pretending taste and judgement don’t exist.

Let’s give a specific example. About thirty years ago, I knew somebody who watched avidly a glossy American soap opera called Dynasty. The soap was made by knowing people who were in part mocking the conventions of soap operas by over-stating them. More sophisticated members of the audience could see it was “camp”. Less sophisticated members of the audience missed this and took it at face value. But in the end, it was still just a soap opera.

“So why do you watch it?” I asked the addict.

“Because it’s ironic”, he replied.

Yes, it was “ironic” in the sense of using a “language that has an inner meaning for a privileged audience” – in this case, a mockery of the conventions of soap opera. But was anything else being critiqued, rather than a rather tawdry form of entertainment, which is easily mocked and deconstructed anyway? You just had to watch ten minutes of Dynasty to get the point, after which there were no further points to get – except perhaps a snigger at the dimwits who didn’t realize it was a send-up.

In saying “It’s ironic”, the addict seemed to me to be merely justifying his liking of soap opera. It would have been more honest to say “I like soap opera” rather than being high-falutin about it.

A more recent example I have only at second hand. I recall a piece, which appeared in the NZ Listener about five years ago. It was about a new breed of “laddish” soft porn magazine which deliberately aped the style of “men’s” magazines from the 1960s and earlier. Risqué gags, articles about cars and lots of cheesecake shots of half-naked women. The publishers said they were intended to be “ironic” – they were knowingly ridiculing an older style of magazine, which now looked faintly ridiculous. But, the Listener scribe fairly asked, what was really “ironic” in any of this? The readership who bought these magazines were young men who wanted the risqué gags, articles about cars and shots of half-naked women. The fact that there was a faint strain of parody was irrelevant. The “ironical” tag was a way of saying “We know this is rubbish but we still want it.”


Twelve years ago, when New York’s twin towers were demolished by terrorist attack, Time magazine declared it was “the end of irony”. This was in part a pompous and untrue statement – “irony” in its various legitimate and debased forms still flourishes. But Time was onto something. In effect they were saying, “Something serious has happened, and there is no room for you to snigger about it under the banner of ‘irony’.”


I agree with that general sentiment. Too often “irony” and “ironical” designate a hollow smirk over something, without any real sense of what irony can be. Or as somebody else put it “Irony is just another name for having nothing to say.”
Posted by Nicholas Reid at 9:00 AM

Email ThisBlogThis!Share to TwitterShare to FacebookShare to Pinterest
Labels: IRONIC AND IRONY, Something Thoughtful