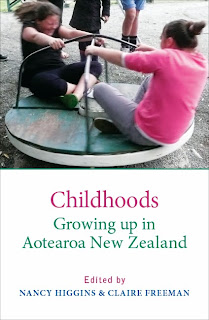 
Even when the contributions are lucid and well-written, it is often difficult assessing symposia, or books of academic essays. Each essay will present the results of research, or argue a viewpoint, that deserves close analysis on its own. Summarising the whole book inevitably seems cursory, unless the review is to grow to unwieldy length. Bearing this in mind, I have recently made my way through two collections of academic essays, and here present my inadequate report:

Edited by independent researcher Nancy Higgins, and Otago’s Associate-Professor of Geography Claire Freeman, Childhoods – Growing Up in Aotearoa New Zealand offers nineteen specialised chapters on aspects on childhood in New Zealand. The nineteen chapters are written by 26 contributors. (I note in passing that only 2 of the 26 contributors are male, which clearly says something about which sex is predominantly involved in both childcare and research into children). Higgins and Freeman divide the essays into three parts.

The first five chapters are “The Context” of New Zealand childhood, setting out the parameters of these studies, comprising discussions of what sort of country New Zealand is (part of this exposition seems written for overseas readers), what theories influence the study of childhood, how the physical environment of New Zealand children has changed, and the ethics involved in research into childhood. It is in this section that there is much reference to the “agency” of children – that is, to the concept that children are autonomous persons in and of themselves, and therefore not to be talked of solely in terms of their vulnerability. As the introduction tells us (p.15) the book was initiated by the University of Otago’s Children and Young People as Social Actors Research Cluster.

The next eight chapters (Chapters 8 to 13) are a diverse bunch, and are therefore fittingly called “Experiencing Diverse Childhoods”. They range from an analysis (by Helen May) of how different from today New Zealand’s elementary schools were in the early 20th century; to a piece of sincere advocacy (by Anita Gibbs) on the needs of adopted and fostered children. There are also chapters on the special positions of disabled Maori children, the role of children in family law and the paid work that is done by young people.

It is the third section  - the last six chapters of the book – “Children and Young People’s Voices” that could have some of the collection’s most provocative material. This is where the essayists and researchers deal more with marginalised children – among others, the children of prisoners (Julie Lawrence); gay and lesbian students at high school (Kathleen Quinlivan); and Maori students facing barriers to getting into work (Moana Mitchell and Hazel Phillips). True to the section’s heading, these and the other chapters in this final section draw extensively on the testimony of children and young people themselves. There is (as there always is in such circumstances) sometimes a tension between the children’s comments and the interpretations given to them. [I noted this same problem in my review on this blog of Children of Rogernomics, which you can find via the index at right. The earlier book is sometimes referenced in Childhoods.]

Now that I have given you an inadequate overview, how do I react to this volume?

The very opening sentences of Professor Keith Ballard’s foreword say “This is a book about children. It will be of value to parents, family, whanau, professionals and any combination of these.”(p.7)  Possibly. As the parent of a larger-than-average family, I have an interest in the raising of children and in childcare, but I am not sure that this is really a book for parents.

It is more a book for professionals.

It is also a book which, despite the diverse interests of its contributors, runs to a general philosophy. There is an awareness that “in Aotearoa New Zealand we have some of the worst levels of child poverty and child health in the OECD”  (Ballard, p.8) and that “the serious decline in Maori well-being [in the years since neo-liberalism kicked in] reflected a ‘racialised social order’ of economic and health inequality.” (Ballard, p.9). This strain of thought is developed in Freeman and Higgins’ introduction, which says: “Aotearoa New Zealand’s neo-liberal economy is not conducive to maintaining support for the most vulnerable children in society, given its emphasis on individualism and economic matters rather than on social welfare.” (p.24) Later, in Anna B.Smith’s essay, it is noted that in some official reports on children “lip service only is given to children’s agency, while their vulnerability and need for protection [are] given much more prominence”. (p.34).

What we have, then, is a book that is ideologically loaded as much as it is the product of research. Please let me make it clear that I do not necessarily disagree with the editors’ and contributors’ ideology. Probably the fallout from neo-liberalism has been bad for many New Zealand children. Probably there are various strains of racism at play.

Even so, the presuppositions must be noted, and there are some that are debateable.

It is one thing to assert, as the introduction does, that New Zealand is “bicultural”, which in terms of one founding document and some subsequent legislation does appear to be the case. But then as much evidence is adduced in later chapters to show that “multicultural” would be a more apt term for large areas of the country. Likewise, it is excellent to emphasize, as so many contributors do, that children are complete human beings in themselves, and not just adults in the making. But any discussion about their “agency” has to be circumscribed with an understanding that their powers to consciously choose are limited and in many cases still moulded by adults. Anna B.Smith speaks of one researcher who “described how teachers can invite children to take an agentive role by embedding them in narratives that put them in the role of agents.” (p.39) The paradox here is that it is the teachers who are taking the initiative in this matter – not a result of children’s agency. And this is a matter that lurks beneath some of my discontent with part of this volume. Does emphasising “agency” actually mean subjecting children to new rules and theories imposed by teachers and government agencies as opposed to norms imposed by parents? Just a rebellious thought on my part.

What I could continue to contribute here would, however, largely be niggles. While aware of the implicit ideology, I was informed by much of this book. I am very grateful that in all the contributors, there are only very occasional lapses into sociological jargon. Although it is primarily a book for professionals, it is not incomprehensible. I took delight in the chapter (by Christina Ergler, Robin Kearns and Karen Witten) on the different ways in which children’s games have been “managed” over the last century. And I note that it is a handsome piece of book production, unusually reproducing photos in colour within the text.

When I open Pacific Identities and Well-being, I am entering territory that is inevitably far more alien to me than a general survey of New Zealand childhoods. Pacific Identities and Well-being is a collection about mental health as it impacts upon Polynesians in New Zealand, both Pasifika and Maori. More than twenty contributors wrote its eighteen chapters, which the editors have divided into four sections thus:

A section dealing with the whole question of cultural identity, both in terms of how much Polynesians are moulded by their inherited cultures in their lives in New Zealand, and how they relate to the larger, non-Polynesian society.

A section dealing with therapeutic practice in counselling Polynesians, being largely advocacy for cultural awareness in counselling and the continued relevance of traditional perceptions.

A section on death and dying in Pacific culture. Interestingly, three of the four essays in this section are specifically about New Zealand Maori and tangihanga.

And finally a section on responsive practice in terms of counselling that actually meets the needs of the (Polynesian) counselled.

There are two matters that make this collection quite distinct from comparable studies of mental health issues written by Palagi. First, there is an open and unabashed acknowledgement of spirituality in the healing process. Two of the editors have religious affiliations – Philip Cutherbertson lectures in theology at the University of Auckland, and Cabrini ‘Ofe Makasioale is a Catholic sister who works as counsellor and psychotherapist. The collection ends with an “epilogue”, by the Presbyterian minister Mua Strickson-Pua, on the value and power of comedy in Polynesian contexts, including free-form poetry with the damning lines “Palagi theologians / you have crucified comedy / sanitising creation with that mythology / for theology of comedy God is not funny / we shall never ever laugh again / or dare even to smile in public / rather some prefer a sombre theology / where the rock has not been rolled away / and we must mourn Easter forever…” (p.291)

There is absolutely nothing naïve in this attention to spirituality. Apart from reflecting the comparatively larger role of religion in Polynesian cultures (as opposed to European ones), the authors acknowledge openly some of the paradoxes of religious influence. For example, Chapter 8 (“On values and spirituality in trauma counselling”) addresses issue of sexual violence “in both church and community settings” (p.146) and considers how spirituality may be misused to cover up sexual abuse.

As will be implicit in some of the above, the other matter which makes this volume distinctive is the degree to which it calls upon imaginative responses as much as upon research-based responses. Each section is introduced with poetry, some written by Tracey Tawhiao and Serie Barford, but most written by the gifted Selina Tusitala Marsh whose volume Dark Sparring (Auckland University Press) I have recently had the pleasure of reviewing for Poetry New Zealand. In a manner of speaking, the poetry expresses the raw emotions, often of grief and loss, to which the essayists turn their analytic attention. And yet some of the essayists are also in imaginative (by which I do not mean falsifying) mode. Teena Brown Pulu’s examination of cultural identity reads, she says (p.85) “more like an autobiographical novel” and has the distinctly stroppy title “The lazy native’s quitting the daytime job. Going home to the village. Yeah, right.”
Posted by Unknown at 9:02 AM