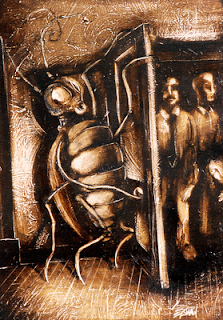 Not for the first time I crave your indulgence and forgiveness for my egotism. I’ve just been discussing Franz Kafka’s masterpiece Metamorphosis, and I recall that after I first read it, in the Edwin and Willa Muir translation, I was struck with the idea that we all reach moments in life when we wonder what has happened to us, and why we are now the thing we are, when we used to be another sort of thing. Gregor Samsa literally becomes an insect or “monstrous vermin” (“ungeheueres Ungeziefer”). None of us suffer that trauma, but we do all age and in dreams we often re-live what we used to be, which is quite different from what we are. Putting this all together, I wrote the following poem, called “Ungeheueres Ungeziefer”.

You are welcome to pass any judgement on it you wish.

When Gregor Samsa woke from pleasant dreams
he found he had been transformed in his bed
into a middle-aged human male.

He had been riding freely on his bicycle
on the broad road near the estuary,
his homework done, his conscience clear.

His wheels had whirred with plans unformed
but real, his schoolboy mind brimmed
with watery anticipation.

From the roadside, the friendly laugh of a girl
enhanced the jerk of his pedals,
the happy play of his bum on the saddle.

And then suddenly, in the unblink of an eye,
he was here, surrounded by flowered wallpaper,
digital alarm clock,  accusatory unread books.

Flesh weighed on him like a dust-filled coat -
the sort that makes you sneeze when you pull it
from the back of the wardrobe, in winter.

His legs were heavy, the muscles of his arms ached,
his right wrist complained at how often
it had had to pull at (and tap) a mouse.

Rheumatism? Arthritis? Old men’s diseases.
He scratched an itch and found a belly
pregnant with fat, taut with stretch marks.

When he made it to the en-suite, the mirror showed
grey hairs, jowls, a discernible timetable
for obsolescence.

Who had plucked and thrown the apple?
Where were the years gone? The bicycle
was still thrumming. This thing wasn’t him.
Posted by Unknown at 9:00 AM

Email ThisBlogThis!Share to TwitterShare to FacebookShare to Pinterest
Labels: Something Thoughtful, UNGEHEUERES UNGEZIEFER