Okay, this is the week of Saint Patrick’s Day, so as “Something Old” I have decided to comment relatively briefly on four novels I have read within the last decade, all of which situate themselves in times of stress in Ireland in the twentieth century. I regard all four of them as very good novels, although only two of them (Sebastian Barry’s and Eoin McNamee’s) would I judge outstanding. As it happens, three of them appeared in 2005, when I reviewed them for the Dominion-Post, and I draw upon my reviews for the comments I make here. I arrange them in the order of the events they recall, not by their dates of publication. 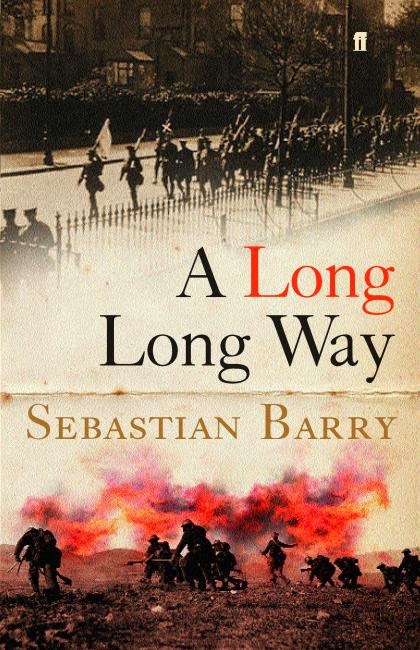 First, Sebastian Barry’s A Long Long Way, it’s title ironically recalling the First World War soldiers’ song It’s a Long Way to Tipperary. The novel faces a curious historical fact that competing mythologies have almost succeeded in burying. In both the First World War and the Second World War (despite the Irish Free State’s official neutrality in the latter), there were far more Irish Catholics serving in the British Army than Ulster Protestants. Ulster Unionists prefer not to admit this fact, because they have a strong self-image of themselves as the sole saviours of the British Empire. Irish nationalists prefer not to admit it, because they dislike the thought of all those Irish lads serving a “foreign” power at the very time of the independence struggle. So Irish soldiers’ experiences on the Western Front have tended not to find their way into Irish novels and other fiction.
Given a big help by the documentary sources he lists, Irish novelist Sebastian Barry clearly set out to correct this omission. His novel takes undersized Willie Dunne, of the Royal Dublin Fusiliers, from 1915 to 1918 on the Western Front. As historical reconstruction, with a strong sense of immediacy, it is impeccable. War is hell. The regiment panics and flees at the first nightmarish gas attack (graphically described). Men die and cannot be replaced. Men visit improvised brothels and find rough entertainment in boxing matches. Men see horrors and sometimes reluctantly participate in them. Men wonder what they are doing there, but grit their teeth and carry on anyway. After all, they are all volunteers. Because of protests, there was no conscription in Ireland, unlike in England.
Inevitably parts of A Long Long Way come across as a sort of Irish Le Feu or All Quiet on the Western Front, and some of Willie Dunne’s mates are very similar to the way Paul Baumer’s comrades were depicted. The big effing and blinding sergeant Christy Moran could almost change places with Baumer’s big buddy Kat. But the very Irish component is the regimental chaplain-priest Father Buckley, no plaster saint but a good tribal leader to the boys and remarkably forgiving of trivial sexual sins in the midst of the greater sin of war.
But there’s more to this novel that yet another reconstruction of the First World War, which has exercised so many novelists in the past few decades (Pat Barker, Sebastian Faulks etc.) and is clearly going to exercise many, many more as we go through that war’s centenary, starting this year. Not for the first time, Sebastian Barry broaches a particular sort of Irish mentality, which has been ignored in noisier nationalist discourses. Willie’s dad, a Dublin policeman, is piously Catholic but also fiercely loyal to the British Empire, and even contrives to be a Freemason. In fact he is essentially the same as the main character in Barry’s famous play The Steward of Christendom (1995). His worldview is doomed by history and his son is what would now be called “conflicted” about many issues. But they serve to prove that there were more colours in Irish history than a simple division into Green and Orange.
I should note that both Willie and his dad are based on real forebears of Sebastian Barry’s.
In reading A Long Long Way, there were times when I regretted that young Willie was quite so thick. He has to have the most basic Irish politics explained to him, especially in the brief vignette we are given of the 1916 Easter Rising. But then, like most of the world’s soldiers, he is only a teenager and naivete is part of his condition.
Sebastian Barry’s style is occasionally poetic, but not in ways that break the novel’s sense of time and place and battlefield sordor.
Understandably, when this novel was first published, it was shortlisted for the Booker.
*   *   *   *   *   *   *   *   *   *   *   *   *   *   * 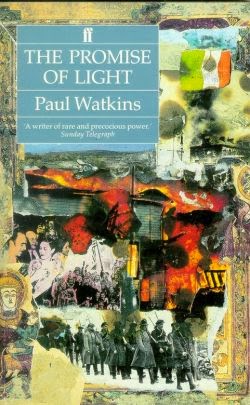 Paul Watkins’ The Promise of Light may be the slightest of the novels in this little collection. Strictly speaking it is not an Irish novel, because Watkins is a Welshman. But it is a good, brisk and efficient look at the “Tan” war, which is what Ireland copped after the First World War. In 1921 Ben Sheridan, a young Irish-American, discovers that the man he thought was his father is not his real father. He travels to Ireland to sort out his parentage. He gets caught up in the Anglo-Irish war as soon as he lands in Galway, quickly becoming integrated into an IRA column, although never showing any consciousness of what the issues are.
It takes quite some time for the first half of the novel to plunge us into the Irish scene. When we do get there, Watkins’ style is visually vivid although his tale does develop in a series of melodramatic jerks. Even so, most of the action is credible, and generally unglamourised. It may be hard to believe that somebody with absolutely no prior training would develop as rapidly into a guerrilla fighter as the protagonist (and narrator) does. But the sense of an outsider’s disorientation is compelling and this may be the essential “message” of the novel. At the very least The Promise of Light does convey the pure strangeness of guerrilla warfare in open country, especially when the issues are never fully clear to the narrator.
I have noticed that most critics of this novel approach it first and foremost as a straight adventure story. It is that, but it has more resonance than a pure thriller. 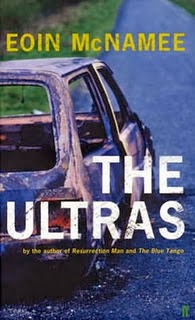 Moving on over half a century in setting, Eion McNamee’s The Ultras takes place in the six counties of  “Northern Ireland” in the 1970s, at the height of sectarian conflict.  It is based closely on real events and involves real characters, recreating the mysterious death or disappearance of British Special Forces operative Captain Robert Nairac. According to official versions, Nairac was captured and killed by the IRA, but his body was never found. If you Google his name, you will still find regimental memoirs presenting him as a sort of Lawrence of Arabia figure who “understood” those simple local Irish and died a heroic death.
Mcnamee’s novel tells a different story.
Paradoxically a Catholic, and the product of an English Catholic public school, Nairac was in effect the mentor of official assassins. The Ultras depicts British intelligence in Ulster running a brothel to blackmail lonely men into acts of violence, shooting people (regardless of their affiliations) who threaten to compromise their operations, and employing all the devices of that same terror they claimed to be combatting. In this context, it is worth remembering that at least half the deaths in Northern Ireland in the past forty years were the work of British forces or those “loyalist” militias they sometimes suborned.
Nowhere do Nairac’s colleagues discuss the political, social or religious state of the land they operate in. Their actions take place in a moral void as a sort of brutal game. This is really the point of this novel. It concerns the corrupting effects of irresponsible power. A truly lamentable tale. 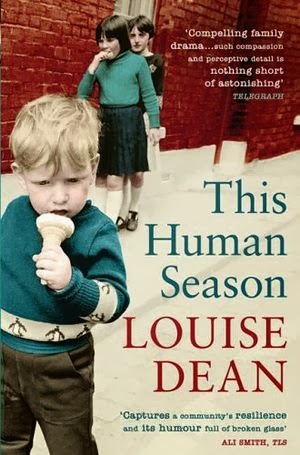 Set also in the 1970s, Louise Dean’s This Human Season suffers only by comparison with The Ultras. The fruit of the author’s diligent research, it is a compassionate attempt to see all sides of the conflict. Dean’s acknowledgments list all the families of internees, clergy, Sinn Feiners, British Army officers and others whom she interviewed as part of her research.
The novel cuts between the home life of a prison officer at the Maze (Long Kesh) and the home life of the mother of one of the IRA prisoners. The officer is English, not an Ulsterman, and thinks himself above the ideological conflict. But he is inevitably drawn into it by the hard-line Protestantism of some of his colleagues, and by his own weaknesses. The mother of the prisoner is piously Catholic, but somewhat at odds with her church over her own disorderly sexual life. They are rounded characters and the separate tragedies they suffer are equally credible.
The most effective passages of This Human Season are the ones that convey the regimented brutality – for both screws and prisoners – of the political prison, the squalor of the republican prisoners’ “dirty” protest and the desperation of people whose homes have been ransacked once too often by security forces. As documentary it is impeccable.
Posted by Unknown at 9:01 AM