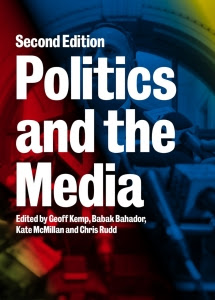 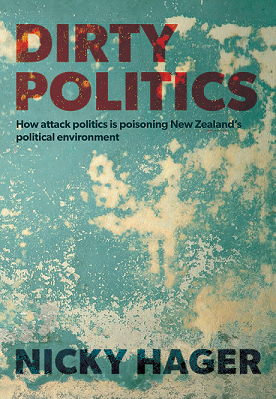 I found myself more drawn to Bryce Edwards’ account (Chapter 14) of “party professionals” and the New Zealand media. In introducing his subject, Edwards remarks: “Occasionally… the public gets a glimpse of how the spin doctors and party professionals operate and this can be controversial as shown by the publication of Nicky Hager’s Dirty Politics during the 2014 general election. This chapter looks at such controversies and other details of how politicians attempt to manage the media and information. It explains how the media strategies of politicians are becoming more covert and sophisticated, and suggests that the story told in Dirty Politics is merely a continuation of trends that have been apparent for decades.” (Bryce Edwards, Chap. 14, p.219) [Emphasis added.] In New Zealand, we too suffer from the plague or PR people and media trainers programming politicians to avoid, or divert attention from, hard questions; and of “focus groups” which coach politicians in selling themselves to the electorate without disclosing real policy details.
When Gavin Ellis (Chapter 15) examines the political role of newspapers, he gives a potted history of newspapers in New Zealand, which began with 19th century newspapers being set up specifically to promote the political views of their proprietors. Gradually, newspapers changed into vehicles of information which tried to be more subtle, and less overtly partisan, in their political preferences. Then came neoliberalism and: “There is ample evidence that [New Zealand newspapers] have enthusiastically embraced the marketing command to ‘give the people what they want’ (or what will induce them to buy the newspaper). The New Zealand Herald’s move to a tabloid format in 2012 has been accompanied by more tabloid content and front-page lead stories with headlines such as ‘My Shame’ (about a man convicted for surreptitiously photographing women) and ‘Body Falls From Hearse’. Good journalism appears as oases amid populist news stories. Other newspapers have followed suit with more entertainment-driven content and there has been a broad shift toward the British tabloid mantra ‘if it bleeds, it leads’.”(Gavin Ellis, Chap.15, p.244)
Kate McMillan’s account of “Radio and Politics in New Zealand” (Chapter 16) correctly notes how commercial formats allow politicians to appear on air without having to face hard political questioning which the likes of Radio New Zealand’s Morning Report and Checkpoint would subject them to. While she endorses the diversity of deregulation, she again notes how impoverished New Zealand political discourse would be without a credible and independent public radio system. Seasoned journalist Joe Atkinson says something similar in his chapter on politics and television (Chapter 17). When Ashley Murchison examines New Zealand’s online media (Chap.18), he issues the familiar warning that this does not herald a brave new world of informed, diverse and independent political commentary, but is as riddled with bias and partisanship as the more traditional media. Indeed the online commentariat is often more zealous in its partisanship than old mainstream media would dare to be: “Some of the more well-recognised and popular New Zealand blogs include Whale Oil, Kiwiblog, The Standard, The Daily Blog, The Dim Post, No Minister and Public Address…. The traditional left-right divide operates within this domain. Accordingly, while the blogs serve to provide basic information about contentious political issues, they also operate as a platform to encourage support for a particular side of the political spectrum… As such, it is not uncommon for prominent political bloggers to have well-established and sometimes controversial affiliations with political parties.” (Ashley Murchison, Chap.18, p.304)
Because it more directly affects you and me, I found most of the essays of Part Two to be more stimulating than those of Part One. Even so, I was constantly reminded that this is a textbook. When making a contentious or controversial statement, the collective authors tend to be measured and even in tone. I was hoping for a full-scale, no-holds-barred attack on the progressive trivialisation of New Zealand’s news services, to the point where only a few Radio New Zealand programmes offer genuine political analysis. A further thing I did not find in this stately tome was a systematic analysis of the education levels and social classes of the readers, viewer and listeners of mainstream New Zealand media (and the partakers in New Zealand social media), especially when the authors are discussing the impact of specific platforms. Perhaps such sociological analysis will be available in the Third Edition.
Posted by Nicholas Reid at 9:02 AM

Email ThisBlogThis!Share to TwitterShare to FacebookShare to Pinterest
Labels: Kemp Bahador McMillan Rudd, Politics and the Media, Something New