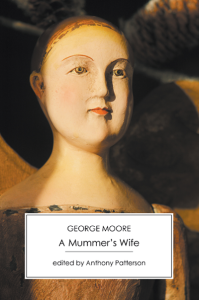 More than once on this blog I have dealt with the Irish-turned-English author George Moore (1852-1933). So far, I have discussed those of his books that are most often reprinted, and regarded as his best work, the novels EstherWaters (1894) and The Lake (1902); and the three-volume autobiography Hailand Farewell (1911-1914). These were all written when George Moore was well-established as a literary figure.
But it is sometimes interesting to consider what an author was like nearer the beginning of his career. Written when he was in his early 30s, A Mummer’s Wife was only Moore’s second novel, coming after the mediocre A Modern Lover. Up to that time, Moore had mainly written (now forgotten) poetry or had tried to make himself a painter. There are moments of vigour in A Mummer’s Wife, and some of the action is vivid. But it is also a rocky ride of melodrama harnessed to social comment and some heavy-duty moralising.
The action of the novel takes place over four years. 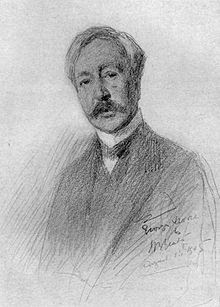 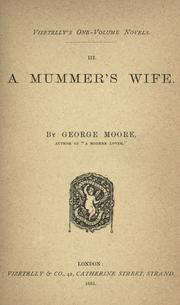 And yet, despite all these offences against Victorians and their lending libraries, Moore himself is essentially Victorian in his attitudes in this novel. Indeed, his attitude towards theatrical people is really as reproving as that of the puritanical Mrs Ede. I can imagine the whole novel playing as a Victorian melodrama under some such title as RUINED! The Downfall of a Plain Woman. The overall structure is what Leslie Halliwell in his fat film guide so often calls “the road to ruin.”
From first to last, the influence of French naturalism upon young George Moore is clear. A Mummer’s Wife begins as Flaubert’s Madame Bovary (or Guy de Maupassant’s Une Vie, which was published the year before A Mummer’s Wife) with a bored woman dreaming of escape from a limiting life. It ends up as Emile Zola’s condemnation of booze and alcoholism L’Assommoir, which was published in 1877, seven years before A Mummer’s Wife. George Moore was a lifelong admirer of Zola, and records a visit he made to Zola in the Confessions of a Young Man, which he wrote a few years after A Mummer’s Wife appeared.
In A Mummer’s Wife there is both ripe melodrama and much piling-on of documentary detail, just as there is in Zola. When Kate and Dick make a visit to a Staffordshire pottery, we get a full description of how the place works. When a Dr Hooper ministers to Kate in her last pathetic days, we are given the pathology of alcoholism and all its symptoms (at which point Moore really is copying L’Assommoir). The effect is much as it often is in Zola – the effect of having been “mugged up” and producing a detachable essay.
There are, however, scenes where Moore’s scrupulous pursuit of physical detail pays dividends. The best single scene in the novel – or at least the one that stays longest in my mind – is in Chapter 12, where the theatrical touring company make a brief stop at a railway station on their route; and manage to scoff a meal laid out by the station’s caterers, without paying for it before their train departs. The narrative of anxious waiters running up and down, trying to find who is responsible for paying for the meal, would not work as well if we had not first been given a full account of the station itself and its practices in catering for visitors who are passing through only briefly. Likewise the scene in which simple Lancashire folk are so impressed by the tatty “Constellation Company” that they give the mummers a bed for the night – this works because we are first given a set-up to what sort of people the Lancashire audience is.
In spite of these merits, A Mummer’s Wife has the same essential flaw as de Maupassant’s Une Vie. Its central character is a puppet. Moore himself appears to despise Kate as a brainless woman, easily duped by tinselly illusions, which are rapidly shown to be only illusions. The literary “pretext” of using her ignorance of the theatre to introduce us to the theatrical life makes her appear doubly naïve. Moore’s fundamental contempt for Kate is made explicit:
“She was the woman that nature turns out of her workshop by the million, all of whom are capable of fulfilling the duties of life, provided the conditions in which they are placed, that have produced them, remain unaltered. They are like plants that grow well so long as they are not transplanted from the original soil. They are like cheap Tottenham Court Road furniture, equal to an ordinary amount of wear and tear so long as the original atmosphere in which they were glued together is preserved. Change this, and they go to pieces. This was precisely what had happened in the case of Kate Ede.” (Chapter 27).
I closed A Mummer’s Wife feeling that George Moore had much talent that had not yet matured. Where he stands morally is at best ambiguous, but the “road to ruin” structure harnesses him to received opinions. He can be vivid when writing of sordor or the scallywaggery of travelling actors, but he can also pile on the moralising. He has read his French masters, but he has not the freedom to speak as frankly as they do. This is a very imperfect novel showing promise. A young man’s novel forsooth.
Posted by Nicholas Reid at 9:01 AM

Email ThisBlogThis!Share to TwitterShare to FacebookShare to Pinterest
Labels: A Mummer's Wife, George Moore, Something Old