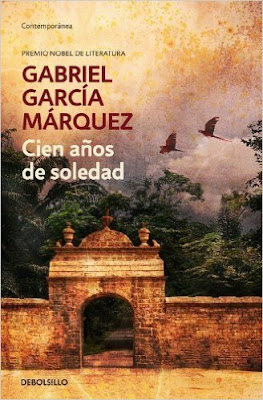 A couple of times before on this blog (see my reviews of The General in His Labyrinth and Autumn of the Patriarch), I have peddled the tale of how I spent seven weeks or so reading the major works of Gabriel Garcia Marquez (1927-2014) ahead of writing a newspaper review of Gerald Martin’s biography Gabriel Garcia Marquez: A Life. Each time I have discussed this Nobel Laureate, I have made a point of noting that his two most-read novels, One Hundred Years of Solitude and Love in the Time of Cholera, never really appealed to me, even though I know that One Hundred Years of Solitude has sometimes been called the most significant Spanish-language novel since Don Quixote. I suppose it is now time for me to explain why I am a heretic in this matter, so here goes:
I have tried very hard to like One Hundred Years of Solitude because it is universally regarded as Garcia Marquez’s masterpiece and the key South American novel – but I simply did not engage with it and in the end found myself only dutifully marching through it.
In “magical realist” style (much as Garcia Marquez and others came to hate that term) the novel covers at least one hundred years (and then some) in the life, across six or seven generations, of the Buendia family in the small Colombian town of Macondo – which reportedly stands in for Garcia Marquez’s hometown of Aracataca. Some of the characters, such as the matriarch of the first generation Ursula Iguaran, live through the whole period. Others, such as her son Colonel Aureliano Buendia (who is said to have fought in 32 wars) exert an influence over many generations. Time is stopped, sped up, reversed etc. and of course repeats itself, sometimes with the implication of the “eternal return”, which has befooled more than one person who can’t be bothered investigating in detail the changes that history brings.
Despite its careful structure, the novel is essentially episodic – which meant that I engaged with it only on an episodic level, enjoying individual stories that are embedded in it, but little else. 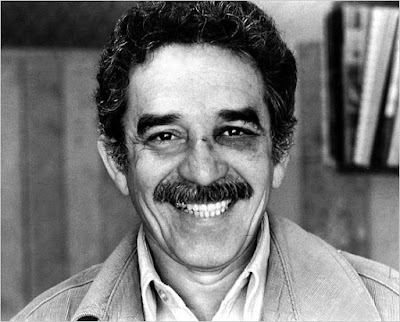 It is hard to discern which themes are implicit or intentional. In the early chapters, there is much talk about the introduction of modern technology (railways etc.) to the basically pre-industrial society of Macondo and its region; hence there is presumably a balancing of the modern and the pre-modern – the scientific and the magical. There is also much about the creative power of the word and the imagination. It is the gypsy Melquiades who introduces much of the technology in the early section, and near the very end of the novel a young descendant of the Buendia family finds writings by Melquiades which could suggest that the whole story of the Buendias family is a figment of the gypsy’s imagination… or could the gypsy be a personification of Fate or Time or History?
The town of Macondo vanishes at the end of the novel, and is preserved only in the memory of Gabriel Garcia Marquez, who introduces himself as a very minor character towards the end.
In the matter of politics, it is interesting to see how Garcia Marquez views the struggles between Liberals and Conservatives with complete impartiality. Colonel Aureliano Buendia fights for the Liberals, but in the political to-ing and fro-ing, the regime he favours is shown to be neither more benign nor more popular than its Conservative rival, and is just as corrupt. This dispassionate view of the political scene is true of Garcia Marquez’s later novels, too, as is the author’s relatively amused view of the Church, which is basically seen as backward but harmless, and is taken for granted as a background factor in everyone’s life. There is some gentle mockery of excessive religiosity. Jose Arcadio, one of the later Buendia offspring, is raised by his pious mother in the hope that he will become pope. But he does not study at all when he is in Rome and instead he becomes a wastrel and a sensualist.
Of course Yanqui imperialism comes in for condemnation with one episode, set in the 1920s, in which thousands of striking workers are massacred to advance the interests of a North American–owned banana company, whose presence has totally changed Maconda’s economy. The massacre is blithely denied and written out of the history books so that nobody any longer believes it happened  – a very ironical instance of the creative power of the word. 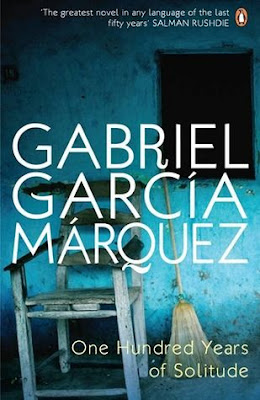 Only research subsequent to reading this novel told me that much of the action is deeply rooted in Colombian history. The 32 wars in which Colonel Aureliano Buendia fought were Colombia’s many military upheavals between the 1880s and 1901. The period between 1901 and 1930 was when the country’s economy became heavily controlled by the (American) United Fruit Company, and the mass shooting of striking workers took place in 1928. One Hundred Years of Solitude has often been interpreted as commentary on colonialism and neo-colonialism. According to a critical consensus the “solitude” of the title points to Macondo representing the unassimilated Hispanic culture which has never fully attuned itself to the South American continent and hence which often feels isolated and receives modern developments from the wider world as if they are “magic”. This false consciousness has to disappear before a real, grounded national character can emerge. Yet when he was alive, Garcia Marquez disavowed any specific political “message” for the novel, and one of the reasons for the novel’s popularity is that it can bear many conflicting political interpretations.
This tells you (superficially) what the novel is “about”, but it does not really give you my reasons for being so lukewarm about it. Basically, my objections resolve themselves into three things.
First, I never attuned myself to Garcia Marquez’s (wilful) confusing use of proper names. Across six or seven generations of the Buendia family, a very small pool of personal names is used. Nearly all the men are Aureliano, Jose Arcadio or such imaginative variants as Aureliano Jose. The women across the generations are all variants of Ursula, Amaranta and Remedios. Yes, there are some exceptions, but as very few people are characterised distinctively enough to separate one from another, it is frequently difficult to know who is being discussed – or to care. I should note, by the way, that some have seen a subtext of incest running through this novel – the founding patriarch and matriarch of the Buendia family are first cousins; there are superstitions about babies being born with pigs’ tails; repeatedly, across the generations, reproduction rarely happens in marriage, or it happens in marriage only after many obstacles are placed in its way. It is an inward-turning society that is being depicted.
Second, there is that deadly, boring, killing, monotonous South American machismo. It is hard to find in this novel any exception to the notion that love is nothing more than seduction and sexual conquest. Frankly, it bored the hell out of me to be told that Colonel Aureliano Buendia fathers seventeen different bastard sons on seventeen different women (all of the sons being called Aureliano); or to have yet another account of somebody’s visit to a brothel; or to be given yet another boastful macho account of seduction and copulation in various poses and angles. It is odd how, apparently, South American culture encourages even left-wing writers to measure themselves by the activity of their penises. Women in this novel are either matriarchs OR they are incredibly sexy and willing OR they are cold and cruel and turn away their faithful dying-for-love swains. (There are two or three examples of the latter class in the novel).
In this field, characters remain cartoonishly shallow stereotypes. Does this mean that I am not attuned to the novel’s intended “epic” style – the broad sweep of an historical panorama rather than the intense close-ups of the tighter narrative? Maybe – but the characters are still shallow.
Third, the historian in me rebels at the violation of linear time. Anterior action (reported in conversation etc) is fine. Flashbacks and memories are fine. But when the hundred years-plus are stirred together as if they are one mythic event, we are really confronted with mystification (i.e. “fudging”) by the author. Often, Garcia Marquez’s style comes across as an evasion of cause and effect and historical specificity. As for the magical realist trimming – to me they are just that. Trimmings.
I have just said negative things about a novel that is held in almost universal esteem, so I am on the wrong side of most commentators and many millions of readers. It is sometimes a burden to have tastes and opinions of one’s own, no matter how well-founded they are.
Posted by Nicholas Reid at 9:01 AM

Email ThisBlogThis!Share to TwitterShare to FacebookShare to Pinterest
Labels: Gabriel Garcia Marquez, One Hundred Years of Solitude, Something Old