LET’S ALL SNEER IN UNISON 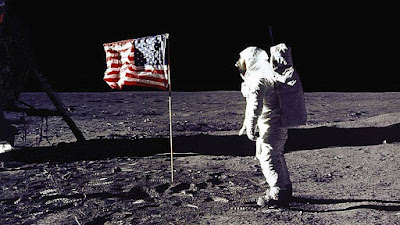 I’ll just reconstruct a little of 1969 for you.


I was in my last year at high school.


The Apollo 11 mission had succeeded. As Michael Collins guided the return vessel around and around the moon (becoming the first man to see the dark side of the moon with his own eyes), Neil Armstrong and Buzz Aldrin landed the pod, stepped out of it and walked on the moon’s surface. For the first time we saw men bouncing about in limited gravity, and pictures of what Earthrise looked like from the moon and what a small cloudy-blue thing our planet was. I was not totally starry-eyed (or moonstruck) about the moon-landing. Even as it was playing out, I was sceptical of Neil Armstrong’s “One small step for man, one giant leap for mankind” statement as he stepped off the ladder. To me it sounded, and still sounds, suspiciously like something he had been briefed to say – a sententious piece of scripting designed to get into the history books, but actually playing as bad Hollywood dialogue. To Armstrong’s credit, he looked distinctly embarrassed in later interviews when the statement came up, and usually wanted to rush on to other things. In other words, he himself clearly knew the sententious statement was bogus.


But apart from this small, jarring detail, the news of the moon-landing was a wondrous thing and we teenagers were all giddy with delight over it. I was acting in a school production of King Lear at the time of the moon-landing, and I remember that when Lear swears “Now by Apollo!”, some schoolroom wits said the line should be amended to “Now by Apollo Eleven!” More important, though, I remember how different the moon looked to me. In Form 7, I was studying German, but we had no German teacher at our school, so three days a week I was allowed to walk down to another nearby school and join their German class. A few days after the moon-landing, I was trotting past the school’s chapel, on my way to the other school, when I looked up and saw the large moon (I cannot remember if it was full or gibbous) right above me in the daytime sky. I thought what an incredible thing it was that men were walking on this great rock, hundreds of thousands of miles away. Am I allowed to call this moment a religious experience? It felt like that.


And that was fifty years ago and of course, as a very old Buzz Aldrin said not too long ago, after all the high hopes raised in 1969, since then the further exploration of the moon has been a paltry thing.


Recently, there were commemorations of this first moon-landing, as there properly should have been. But with them came what are now the ritual sneers about the whole project. (I’ll ignore the conspiracy theorists who say the moon-landing never happened. They’re not worth arguing with.)


The sneers focus on saying “It was just about the Cold War”, belittling the great achievement that the moon-landing was. Well of course it was played out in an era of intense rivalry between the USA and the USSR. And although I have heard a Russian deny the fact (“We weren’t interested in getting to the moon. We were exploring other things in space”), the reality was that both that USSR and the USA hoped to win the prestige of being the first on the moon. The recent release of a cache of Soviet posters from this era includes images of the hammer-and-sickle being planted on the moon, which was clearly the Soviet government’s hope.


But the obvious point here is that rivalry between nations, or between individuals, has stimulated many great achievements throughout history. In the space of less than twenty years, aircraft developed with remarkable speed from the canvas-and-wood contraption that took off at Kittyhawk to the sleek and efficient machines that were already flying by the 1920s. Like it or not, the great stimulant in this case was the First World War, with enemies month by month racing each other to improve aircraft armament, manouevrability, stalling speed, angle of dive and so forth. Saying that the moon-landing was the result of national rivalries, is simply saying that it was played out in a certain time in history. “It was just about the Cold War” says nothing more than “It happened at a particular historical moment.” As all things do.


The other avenue for sneers is the “conspicuous consumption” argument. Why were so many millions of dollars spent on the space progamme when they could have been spent on improving the world?


The phrase “conspicuous comsumption” was first used by the Norwegian-American sociologist (and – frankly – satirist) Thorsten Veblen in his 1899 book The Theory of the Leisure Class, which was designed to ridicule plutocrats and their idle families. Veblen was not a Marxist, but his handy phrase has often been taken up by Marxists to belittle the more ostentatious aspects of capitalist life. It is “conspicuous consumption” when decadent Westerners raise skyscrapers or manufacture non-essential consumer goods. (But it apparently is not “conspicuous consumption” when huge Motherland statues are raised, or when ostentatious mausolea are constructed for Lenin, Mao etc.). I grant that in many societies, much money is wasted on non-essentials, but the logical endpoint of this line of thought is Thoreau’s fatuous idea that we don’t need houses – we could all live in simple wooden boxes that protected us from the rain.


The fact is, the “non-essential” things – the things that deliver more than just the basics for staying alive – are often the things that make life worth living, like great works of art, space for intellectual discussion, sports and so on. Sure, millions of people spend millions of dollars on utter trivia. Not all “non-essentials” are of any merit. But to put things into perspective, the whole Apollo moon mission cost LESS than the USA was spending per month on the Vietnam War (or, as a documentary pointed out, the whole space programme cost less that American men and women spent each year on cosmetics). Can we always say, as Judas did “the money should have gone to the poor”? The “conspcuous consumption” argument really implies a completely utilitarian view of society in which no great building or public statue would ever be raised, no “non-essential” research would be pursued, and no space programme would be undertaken.


The Apollo mission was undertaken during the Cold War? True. All things happen in an historical context. The Apollo misssion cost a lot of money? True – and so do many far less worthwhile things that are taken for granted.


Neither of these objections can negate the fact that the Apollo mission was a great and wonderful thing. The sneers add up to very little. 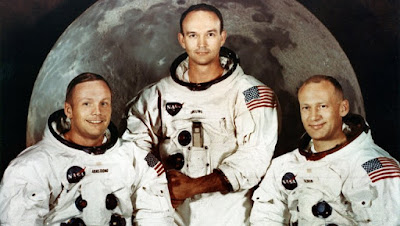 Email ThisBlogThis!Share to TwitterShare to FacebookShare to Pinterest
Labels: Let's All Sneer in Unison, Something Thoughtful