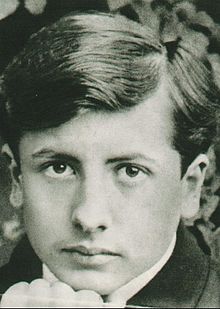 Reading a book consciously intended for teenagers leads me to consider those few real classics that have come to grips with the adolescent mentality. A book like The Future of Us is perishable – a commercial product and thing of the moment. It will be forgotten as soon as the movie version is made. Teenagers who read it will rapidly move on to other things from the same commercial template. Stroking teenage tastes is a huge industry now.

But what of a novel written before there was such an industry, and at a time when adolescence was merely an awkward stage between childhood and real adulthood?

Le Grand Meaulnes is such a novel.

A little background. To presume to tell anyone even the most elementary things about this novel would be regarded as laughable in France, because it is so well known. In the 99 years since it was first published, Le Grand Meaulnes has never been out of print there, often appearing in de luxe illustrated editions which are considered ideal gifts for  those 15- or 16- or 17-year olds who can still read. Once upon a time, this was the novel that was read by all intelligent French teenagers and not a few wistful adults – a bit like the way intelligent American teenagers in the 1950s read The Catcher in the Rye (before they were forced to read it as a high-school set text, and it lost its magic).

In 1999, when everybody was  making “best of…” lists in time for the new millennium,  France’s leading newspaper Le Monde polled readers to list the ten most influential novels of the 20th century. Le Grand Meaulnes easily made their list (which happened to consist of eight French novels and two American ones). For the record, the novel has been translated into English many times and under various titles, including the dullish The Wanderer, The Lost Estate, and the translation I have on my shelves The Lost Domain (Oxford World Classics; Frank Davison translator). Personally, I think the translators should have left the original title untouched. When its eponymous character is so charismatic, changing the novel’s title is as foolish as it would be to change the title of Don Quixote or Faust.

Why has this novel continued to be regarded as magic?

A little of its interest (but only a little) comes from the circumstances of its writing. It was the first and only novel of young Alain-Fournier (pseudonym of Henri-Alban Fournier, 1886-1914). It was published one year before he was killed fighting on the Meuse, in September 1914, in the opening stages of the First World War. He was only 27. Surviving photographs of him show a very handsome, schoolboyish face. So in one sense he’s like a French Rupert Brooke figure – the promising and beautiful young man killed and mourned at a time when people were only beginning to get used to long casualty lists. He’s also a wonderful case of the literary “oncer” – the writer whose one and only novel becomes a classic (like Emily Bronte’s Wuthering Heights; like Raymond Radiguet, who wrote much more but is basically remembered only for Le Diable au Corps).

These interesting historical circumstance don’t explain the novel’s appeal, however. More than anything, I read it as a poetic account of the time when childhood is behind but adult responsibilities are not yet fully understood and are equally desired and feared.

Forgive me. A partial plot-summary is in order.

Augustin Mealnes is the tall new pupil who arrives at the country boarding-school run by the father of the novel’s narrator, Francois Seurel. Poor Francois is timid and a cripple with a deformed knee. But Meaulnes is athletic and so idolised by the other schoolboys that they soon call him “le Grand Meaulnes”. He’s the type of boy to whom adventurous things seem to happen.

Once, while playing truant from school, Meaulnes finds himself at the country estate of the aristocratic de Galais family, at what should be the wedding celebrations of Frantz de Galais. Except that the bride doesn’t turn up and the wedding feast is cancelled. While at the estate, however, the truant schoolboy falls in love with Frantz de Galais’s sister Yvonne de Galais. He also makes a binding oath with Frantz (the type of thing schoolboys used to make) to help him find his missing bride.

And just as mysteriously as he found his way to the de Galais estate, Meaulnes travels back to Seurel’s school. You see, he literally falls asleep as the old horse pulls his cart back home, and he is therefore totally unable to find his way back to the de Galais estate when he wants to, because he cannot work out which of the tangled, rough, overgrown country roads he should take.

Thus the first third or so of the novel, which is much the strongest part of it.

I won’t summarise the rest. When I first jotted down things about it in my notebook, I said that the easiest way to kill the novel’s unique, tentative atmosphere was to give an extended, rationalised plot-summary if it. Suffice it to say it involves much wandering as Meaulnes searches for Yvonne; and Frantz searches for his runaway bride. It has at least one wonderful over-the-top romantic scene where the narrator, Francois, carries downstairs the beautiful body of a young woman who has just died giving birth. As in a dream, things happen unexpectedly and not quite rationally, with the mundane practicalities not accounted for and the commonsensical questions (which could resolve much of the story’s mystery) never asked.

Characters move from late adolescence to their early twenties.

One of the most obvious things that strikes you when you read it is how very different the world was a century ago. This is a world where a decaying estate, hidden only a few miles away in the country, could be a mysterious “lost domain” impossible to find again. It is the world of horses and carts and schoolboy rambles on foot and villagers whose whole life is spent within a radius of a few miles.

More enduringly, though, it captures that common adolescent feeling that “real life” is going on somewhere else, and is just out of reach – that everybody else is having a party and fun from which “I” am somehow locked out. This is what comes through to me most strongly from the images of the “lost domain” that cannot be found again; although the “lost domain” works just as potently as a sign of lost childhood certainties and innocence – like the image of the carousel on which Holden Caulfield watches his little sister ride, towards the end of  The Catcher in the Rye.

You can’t help but notice that the timid, stay-at-home narrator Francois contrasts with the adventurous, wandering Meaulnes in almost the same way that prudent Lowlander David Balfour contrasts with buccaneering Highlander Alan Breck Stewart in Stevenson’s Kidnapped. Most adolescent male readers, I suggest, are more like Francois and David and can identify with them. But in their fantasy lives they would so like to be Meaulnes and Alan. This is also a major part of the novel’s appeal.

I should note that some half-hearted attempts have been made to read a homosexual sub-text into the novel. There is a famous scene where Meaulnes deserts his beloved Yvonne and runs off with Frantz to help Frantz in his long search for his bride. There is the schoolboys’ hero-worshipping of Meaulnes. I don’t think there’s anything in the gay interpretation, however. The homo-social nature of much schoolboy life (especially in a boarding school) isn’t the same as homosexuality, and the novel insists on its young male characters’ devotion to rather idealised young women. This too is part of its essential adolescence. In this state of idealisation, the young men haven’t yet left the homo-social for the fully heterosexual.

And I doubt that any thoughts about types of sexuality would even enter the heads of the hundreds of thousands of teenagers who have read this novel.

I have made a very lame attempt to convey the unique atmosphere of Le Grand Meaulnes here and to explain its enduring appeal. Perhaps the best I can say is that it reflects a major and eternal part of the adolescent male psyche – badly wanting the princess, but not yet knowing how to win her. Wanting to be a hero – indeed being a hero among boys of your age group – but not fully understanding the practicalities of the world. Believing in honour and obligation and first love in a way that grown-ups can only regard with nostalgia once grey, compromising adulthood hits them.
Posted by Nicholas Reid at 9:01 AM