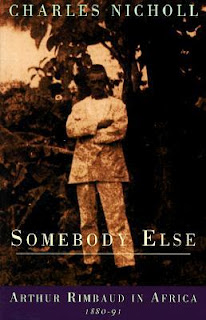 
Please get out your violin and play a sentimental accompaniment, as I am about to sing one of my favourite songs. It goes like this. We should remember writers for what they write, not for how they spent their lives. The words on the page – they are the things that make writers worthy of note. So strictly speaking, Arthur Rimbaud (1854-91) should be remembered for Les Illuminations, Le Bateau Ivre, Une Saison en Enfer and perfect (and much anthologised) sonnets like Le Dormeur du Val.

Yet, in spite of the literary creed I profess, there are some writers whose legend manages to detach itself from their work. The reputations of poets who die young (Chatterton, Keats, Shelley, Owen etc.) are particularly prone to this phenomenon. And Rimbaud’s legend is known by people who have not read a word he wrote – or at least they have not read a word he wrote in the original French.

Here is the rebellious teenage poet, the ultimate enfant terrible, who blazed up with fully-formed works at the age of 15 or 16, wrote furiously and with inspiration for three years or so, and then stopped writing forever at the age of 19. It wasn’t death that felled him. He simply detached himself from poetry, detached himself from former bohemian friends, and went off in quest of an “ordinary” life as far as possible from his old haunts. Dying at 37, he had written no poetry for 18 years.

He has become an archetype (and regrettably also a cliché) – the inspired teenage poet who got lost in the adult world. Even before more recent poseurs got hold of Rimbaud’s image (see my rude comments below), the teenage Dylan Thomas in the 1930s was already describing himself as “the Rimbaud of Cymdonkin Drive”, conscious homage to a fellow adolescent poet with a reputation for thumbing his nose at convention.

Rimbaud was becoming somebody teenage scribblers aspired to be.

Pieced together in numerous biographies, Rimbaud’s brief career as a poet is well documented. But what happened to him after the poetry stopped? This is what concerns Charles Nicholl in Somebody Else. Nicholl is an Englishman with a taste for literary mysteries. The only other of his books which I have read is The Reckoning (1992), a convincing and detailed attempt to reconstruct what really happened when Christopher Marlowe was murdered. Somebody Else is specifically about Rimbaud’s last eleven unpoetic years in Africa. The title comes from Rimbaud’s famous “Je est un autre” (“I is somebody else”), a statement about the distinction between an author and the voice he adopts on the page. But Nicholl has apparently chosen the title because Rimbaud clearly became “somebody else” in a more literal sense once he ceased to be the adolescent poet.

In order to get Rimbaud to Africa, however, Nicholl has to spend the first quarter of his book telling us of Rimbaud’s earlier life. So we get rehearsed the good little Catholic boy from Charleville (there is a famous photograph, often reproduced, of Rimbaud on the day of his First Communion); the runaway, uncouth teenager in Brussels, Paris, London; the whole of his homo-erotic relationship with the older, and vacillating, Paul Verlaine, including their explosive bust-up; and the strong probability that the vagrant teenager was traumatised after being buggered by soldiers. The isolate Rimbaud is such a unique figure that we tend to forget his adolescent story was played out against the background of the Franco-Prussian War, with troops tramping through city and countryside as the boy’s negligent and absent soldier father had once done.

Rimbaud’s fierce and defiant slovenliness is dwelt upon (in which particular the teenager was at least the equal of the noisome Ernest Dowson). Despite a famous romanticised painting showing Rimbaud at table with Verlaine and other poets, the reality seems to have been that most of Verlaine’s café friends saw Rimbaud as an unwelcome, intruding, crude, loud-mouthed kid. In terms of either camp-ness or adolescent irony (they tend to be very similar), so much seems implied by the way Rimbaud referred to his over-controlling mother as “la Mother” (using the English word), and Verlaine and Rimbaud habitually called London “Leun-deun” when they were scraping a living there.

Thus far the first quarter of Nicholl’s book. At which point it must perforce become a minute searching of fugitive documents and scraps of evidence as Nicholl reconstructs Rimbaud’s post-poetic life. Nicholl unearths a lot, and is fair in warning us when he has had to speculate.

After a couple of aimless years wandering in Europe; after joining the Dutch army, travelling to Java, and then deserting; Arthur Rimbaud headed for Africa. Here he really did become “somebody else”, putting poetry totally behind him, never again having the least interest in it, being impatient with arty people, and becoming a very professional and enthusiastic trader. He was first based in Aden. Then he worked mainly in Ethiopia (it was at the time of his sojourn there that Ethiopia first turned itself into an indigenous empire). He reckoned his accounts. He settled in Harar. He wrote dry reports for his employers of his transactions and travels. He was taciturn, sun-tanned, rangy, and sociable enough. He might for a while have had an Ethiopian mistress. Sometimes he talked of marrying, and of having children and settling down – but he never did. He was restless, he was never domestically settled, yet he was methodical in his work.

From this book, you get the distinct impression that the chief attraction of Africa to him was that it was not Europe and it did not contain Europe’s chattering intellectuals, artists and poets. You are also aware that Rimbaud’s fairly humdrum life in Africa would hold no particular interest for us had Rimbaud not once been the adolescent poet. Nicholl makes no reference at all to the wishful idea of some commentators that Rimbaud was trying to earn enough money to live independently and return to the literary life. There is not a scrap of evidence for this. But there is much evidence that he frequently wished he had a son; and wanted that son to be an engineer – something constructive and pragmatic and 180 degrees away from poetry in cafés and the cloudy lyricism and pawing of Verlaine.

Finally Somebody Else gives us Rimbaud’s premature end. His right leg became infected and cancerous. He underwent a painful portage from Harar to the coast, and an equally painful journey to Marseilles. His leg was amputated. He made a brief visit to his native Ardennes, then a train trip back to Marseilles, where he died.

And here we come to a point of contention where Nicholl could possibly be quite wrong.

Nicholl admits that Rimbaud’s last real caregiver and faithful friend was his little sister Isabelle, who was a devout Catholic. But Nicholl is sceptical of the account (for which Isabelle is the only source) that Arthur was reconciled to the church in his last week of life, and died a pious death. Possibly Nicholl is right to be sceptical, but it is just as likely that he rejects Isabelle’s account (by which some earlier biographers have set great store) mainly because it spoils the image of the rebellious teenage poetic genius. In response, I would say that by the age of 37, Rimbaud was no longer the kid he had once been, and his working life for the best part of 15 years had been one of un-rebellious conformity and alienation from bohemianism. Like Baudelaire before him (and like James Joyce after him), his reaction to the Catholicism in which he was raised was very complex and was never a matter of simple rejection. In short, Isabelle’s story of his end is just as likely to be true as not. We simply do not know.

Nicholl is probably on surer ground when he dismisses the claim that Rimbaud was ever involved in the slave trade when he was in Africa. In her detailed 1938 book Arthur Rimbaud (which I have before me as I write this notice), the English biographer Enid Starkie seemed to produce good evidence that Rimbaud was involved in both gun-running and the slave trade. Nicholl revisits her evidence and makes a good case for discounting it. In an odd sort of way, I’d have to say that Rimbaud’s not being a slave-trader also damages the legend. There are, after all, those deluded fans, who wish to associate literary figures with unforgivable wickedness because it puts them in “the Legion of the Damned” or some such tired phrase, and gives them a perverse glamour. (Incidentally, Nicholl devotes some pages to telling us how much French biographers of Rimbaud detest Starkie’s book, and have made up a rude name for the Englishwoman.)

Having quarrelled a little with some aspects of Nicholl’s book, I now have to admit the two things that really bug me about it. First, Nicholl is far too keen to see ‘prophetic’ elements in Rimbaud’s poetry, which he interprets as specifically foretelling Rimbaud’s later life in Africa. This is very dodgy as both interpretation and literary criticism. The real achievement of the young poet gets lost. Second, he trivialises and demeans his subject with glib references to, and comparisons with, pop icons like Bob Dylan, Jim Morrison, Patti Smith and the like, as if Rimbaud really was merely the precursor of the Beats, free-verse improvisers and those American teens who think poetry just means letting it all hang out while posing for a camera with a sulky look. This is where I have to put in my nasty comment about poseurs attaching themselves to Rimbaud. The myth of the adolescent poet who rode on sheer wild inspiration leads to inanities like Edmund White’s superficial short biography Arthur Rimbaud: Double Life of a Rebel, which tries to set up Verlaine and Rimbaud as the dream gay couple from SoHo and Rimbaud’s poetry as “proto-punk”; or Christopher Hampton’s ridiculous 1967 play Total Eclipse [made into a forgettable movie in the 1990s], which presents Rimbaud’s long literary silence as a tragedy.

Frankly, I see no tragedy. Sure, there is something touching in the fact that the only verifiable images we have of Rimbaud in Africa are two indistinct photographs, which could be of anyone. There’s an effect of tantalising mystery to this. But my chief impression in reading Rimbaud’s poetry is of an adult intelligence inside a teenage sensibility – and when that teenage sensibility was gone, the adult intelligence moved on. Le Bateau Ivre and Une Saison en Enfer are works of literary genius because they are such brilliant and clear expositions of an adolescent mind. Beyond that adolescent sensibility, Rimbaud ceased to be a poet.

As an excellent critic of his own work, one of Rimbaud’s best decisions was to stop writing when he had nothing more to say. This was not tragedy. It was clear judgement and evidence of a man growing up.
Posted by Nicholas Reid at 9:01 AM

Email ThisBlogThis!Share to TwitterShare to FacebookShare to Pinterest
Labels: Charles Nicholl, SOMEBODY ELSE – Arthur Rimbaud in Africa 1880-1891, Something Old