Nicholas Reid reflects in essay form on general matters and ideas related to literature, history, popular culture and the arts, or just life in general. You are free to agree or disagree with him.
ON THE POTENCY OF RUINS
Here is a little aesthetic question I’ve often asked myself.
Why is it that the ruins of old buildings have such a strong imaginative effect upon us – often more powerful than the imaginative effect of equally old buildings that are fully preserved?
I think, in my usual idea-association-game way, of all the artists and photographers who find it preferable, and more artistically satisfying, to paint or shoot ruined old farmhouses than old farmhouses that are still inhabited and maintained. The dilapidated shack with the rusted and peeling corrugated iron roof was once as ubiquitous in New Zealand painting and photography as the inevitable driftwood or bones of dead sheep. Virtually an artistic cliché.
Sometimes the ghost of an answer to my question was given in poetry. In one of his best poems, the young James K. Baxter wrote of “The Fallen House”, the bits and pieces of an old farmhouse, as being “haunted” by “the wraith of dead joy”. To see a ruined building is to invest it imaginatively with ghosts; to realize, without laboured conscious reflection, that it lived once, in the past, but is no longer living now; to know that it has to some extent come to an end, and hence has a story to tell. The only people who used the ruined building are the dead, and we give them a tragic significance. In contrast, the fully-functioning old building, or the old building preserved in its original shape, is not haunted by such ghosts. It is inhabited by living, un-tragic people as quotidian as we are.
That is one answer to my question but, by way of yet another question, let me propose another answer. Could it be that once a building is a ruin, its utility is gone and we can see it in purely aesthetic terms? We do not think so much of its purpose as of its shape and materials, and we are actively and imaginatively involved in reconstructing what its shape once was, before it was a ruin. Paradoxically, we are participants in re-creating the ruin.
So ghosts, and our imaginative collaboration, are what make ruins so potent.
Please understand that I do not mean to fetishize ruins. I am not "some ruin-bibber randy for antique". I am not saying that we should value an ancient ruined cathedral or castle more than we value an ancient well-preserved cathedral or castle that is still in use. I am amused by, rather than admiring of, those wealthy eighteenth-century English squires who would get an architect to design a ready-made Graeco-Roman “ruin” for their estate because it gave them that sweet sense of melancholy for dead antiquity that was such a big feature of their culture. Ruins have to be made by time or by the accidents of history to be potent. They are not mere “follies”.
I was fired to think about all of this a month ago, when my son and his family were showing my wife and me bits of the north of England.
One day, under an overcast but non-threatening English sky, we drove south from Durham and visited two great ruins in Yorkshire on the same day. 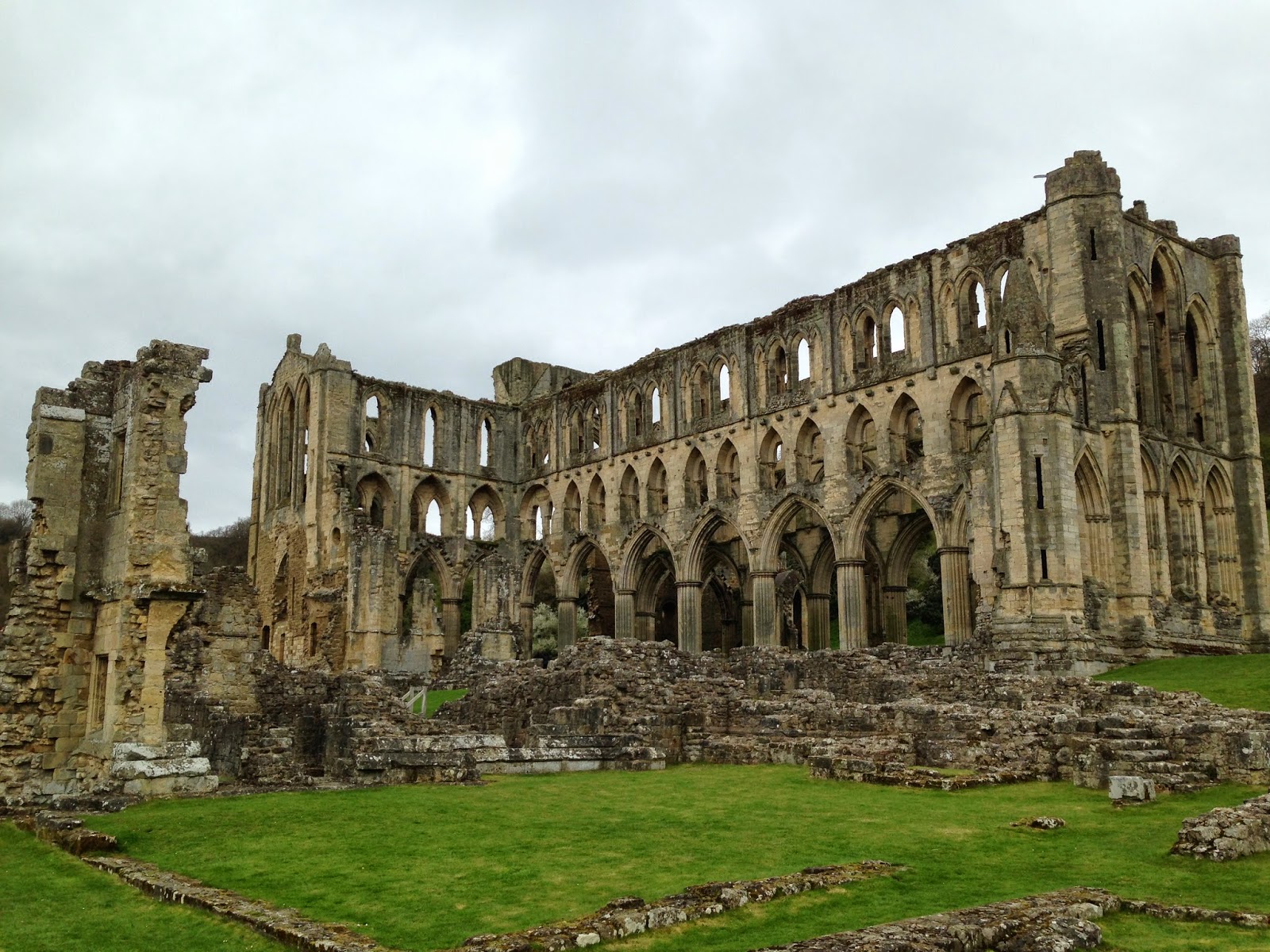 First, Rievaulx Abbey, a huge and really impressive Catholic abbey that served much of the north of England with charity and hospitality for about 400 years. It was smashed up and turned into an uninhabited ruin when Henry VIII was busy dissolving the monasteries and creating the new state church, founded as much on nationalism as on Christianity, that is the Church of England. I was pleased to note that in the small museum attached to Rievaulx Abbey, the buildings’ Cistercian history was treated with respect, the lives and duties of the abbots and monks who lived there were chronicled in detail, and the institution’s religious and economic purposes were given equal weight. In its medieval heyday, the abbey was at the centre of a web of countrywide missions. It controlled and serviced many farms, and produced goods for trade that contributed to the area’s wealth. But the scriptorium where the gospels were copied, the liturgical purpose of many features of the buildings, and the way the abbey celebrated the major seasons of the Christian year, were also accounted for in the texts and placards that the museum presented to tourists.
This was all very edifying, but our visit was inevitably dominated by the great ruin itself – and here the imagination had full play. 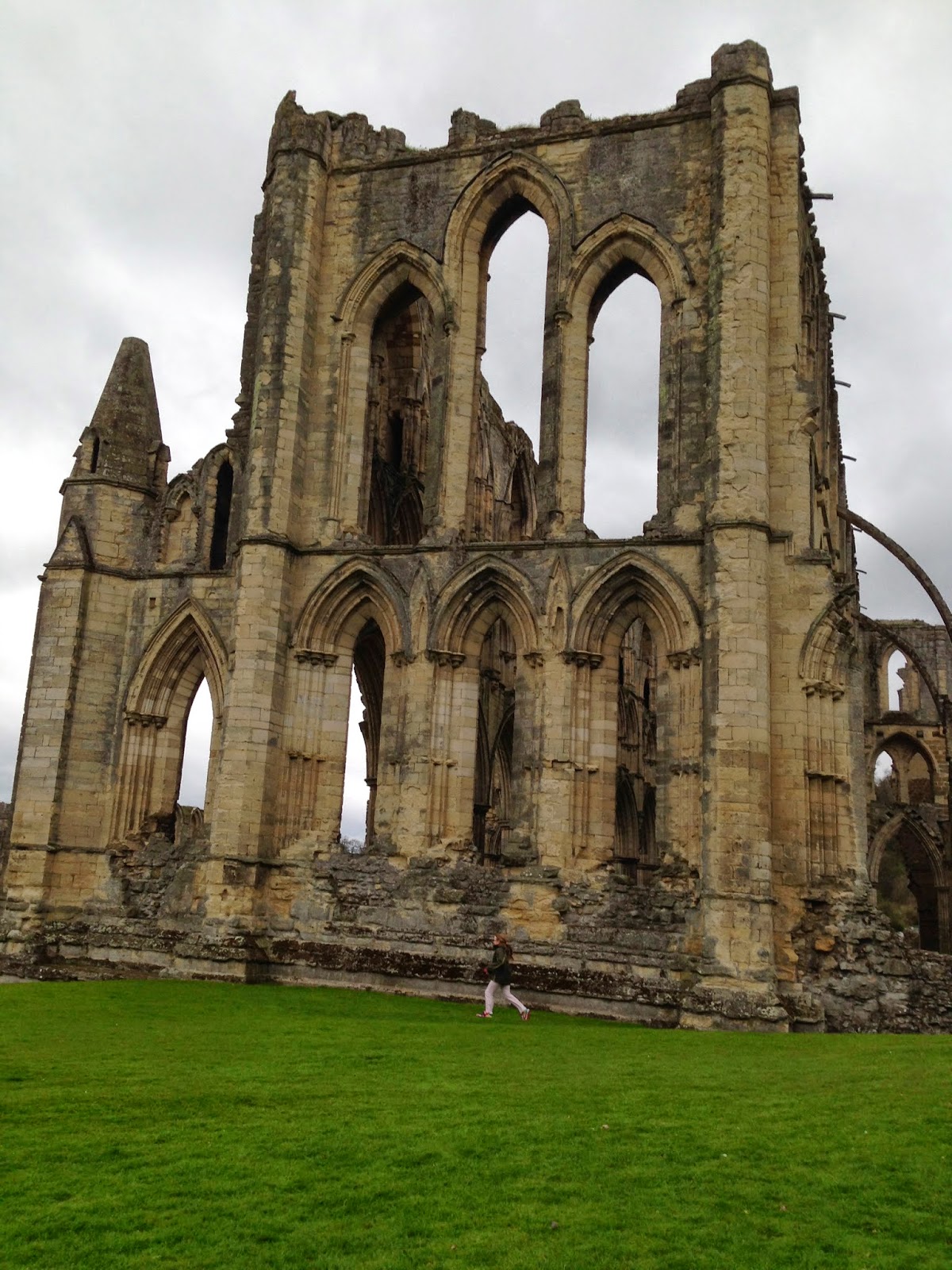 Put it in the right grey Yorkshire daylight, or put it under a full moon, and it would be what Turner would have painted or Wordsworth would have written about if he hadn’t decided that Tintern Abbey in Wales deserved his verse more. There was that vague, ruin-associated Romantic sense of the Sublime. But my imagination was more at play reconstructing what the abbey would have been and how it would have lived before its dissolution. Here was where the high altar would have been. There would have been stained glass where there were now gaping Gothic-arched holes in the remaining walls. The cloisters would have been here and around this square of grass were once the individual rooms of abbots and senior ecclesiastics.  How the cisterns worked and where they were situated was just as interesting. I imagined monks, on a cold fifteenth-century winter night, having to shuffle from their cells and relieve themselves in conditions that we would now see as primitive and uncomfortable.
Yet the very size of it! The grace of the remaining buildings’ design and the engineering feats which, save for a king’s interest in acquiring its wealth, would have left it standing after over six hundred years! To look at it was to belie the ignorant idea that in the “Middle Ages” they knew nothing of the practical arts and sciences.
So I populated the ruins of Rievaulx Abbey and its “bare ruined choirs” with ghosts, and saw aesthetic beauty in it.
In some ways, the second Yorkshire ruin that we visited that same day, an hour-or-so’s drive from the abbey, was filled with even more lively imaginary ghosts.
This was Helmsley Castle, a formidable medieval pile.
It was originally built in the period when “borderers”, the northern English and southern Scots, made a habit of raiding each other’s territory to steal cattle, terrorise isolated farms, and grab loot. The original twelfth-century castle was later strengthened with a moat and “curtain”, and the great keep, the ruin of which still towers over the nearby town, became an effective observation post should the Scots be raiding.
But what of the effect of the ruin? 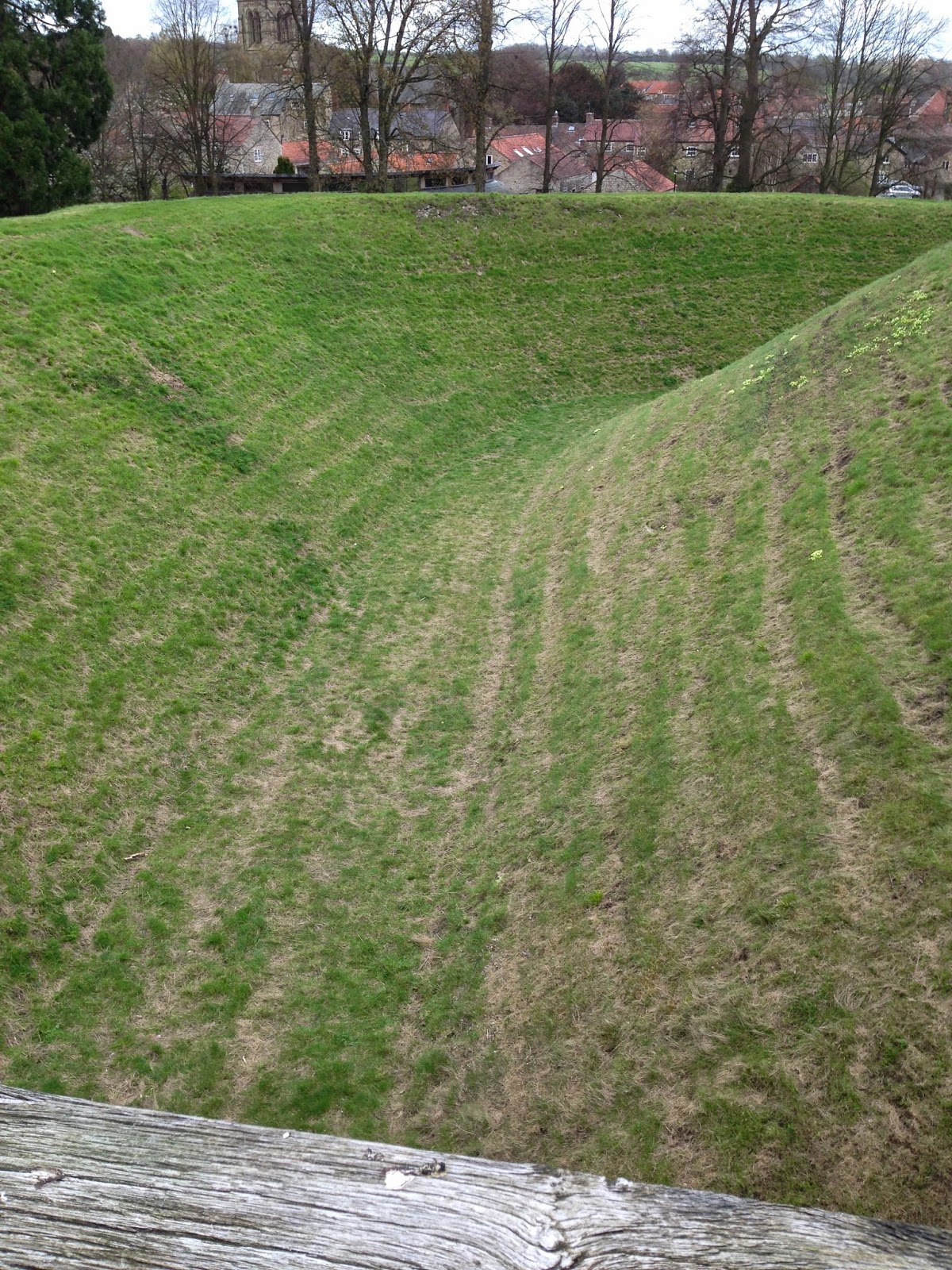 First, there was that weird sense of disjunction that a place built on violence (castles were designed for warfare) should now be so peaceful.  I snapped the well-tended, gentle grassy slopes that were the castle’s earthworks – originally an effective piece of military engineering that was simply not designed for peaceful contemplation.
Then there were the historical circumstances of Helmsley Castle’s reduction to a ruin. It happened in the English Civil War. The castle was a Royalist stronghold. Oliver Cromwell’s Roundheads besieged it and eventually starved the Royalist garrison out. Then, once they had taken the castle over, the Roundheads decided to prevent it from ever becoming a Royalist strongpoint again. They systematically pulled down most of the surrounding walls, knocked the floors out of the residential part and, as their coup de grace, blew up the great tower that was the castle’s most defensible building. 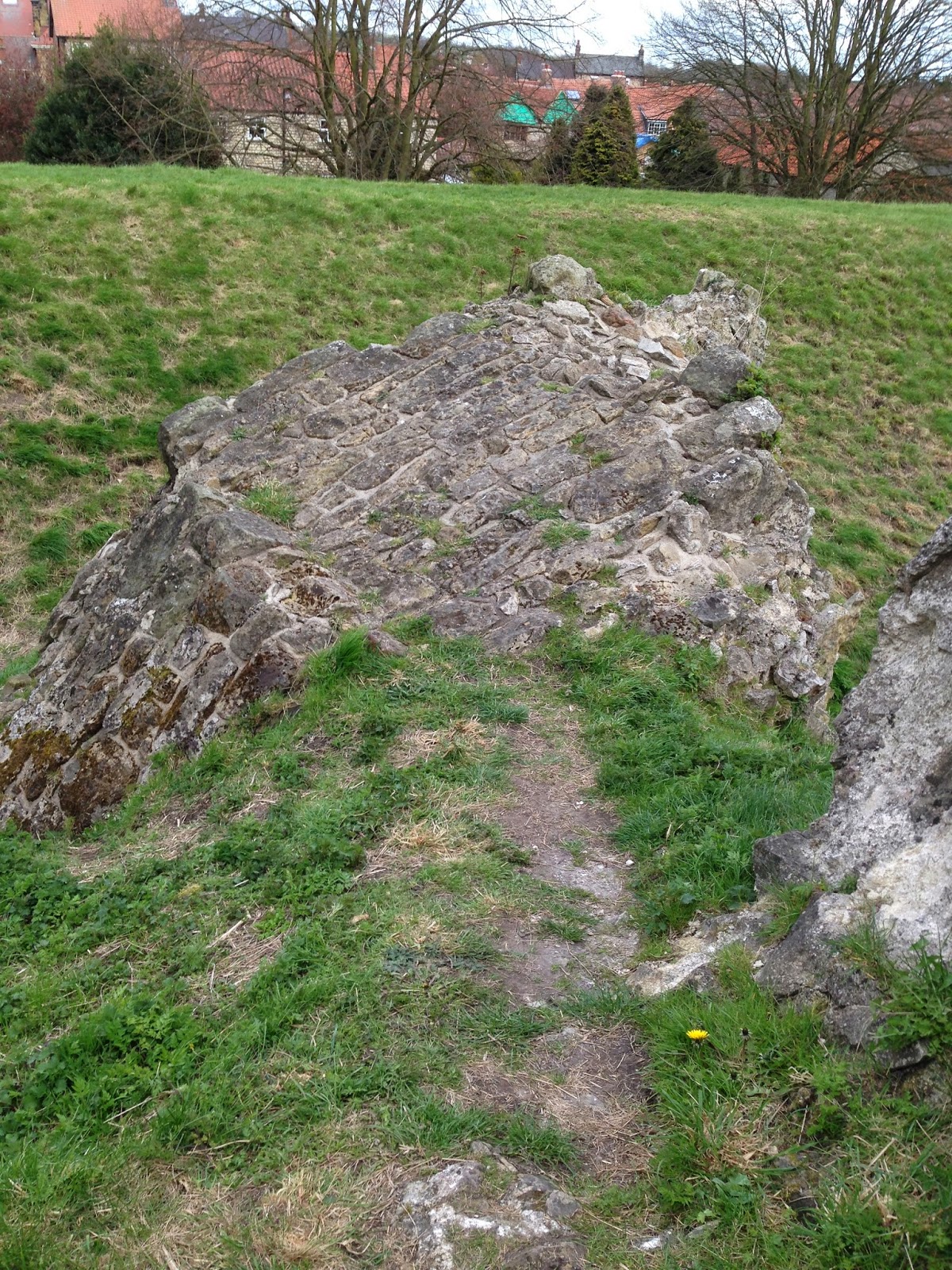 As I looked at the remains of the tower, knowledge of this piece of demolition amazed me. We think of high explosives as an invention more recent than the seventeenth century. But the evidence of how Helmsley’s tower was destroyed shows that tons of gunpowder, properly prepared and packed, could do enormous damage. From two angles (looking at, and looking away from, the remains of the tower), I photographed a huge piece of masonry, still buried in the surrounding earthworks three-and-a-half centuries after the parliamentarians did their job.
The ruin’s ghosts were dancing around me. I can only imagine that the explosion must have been tremendous. 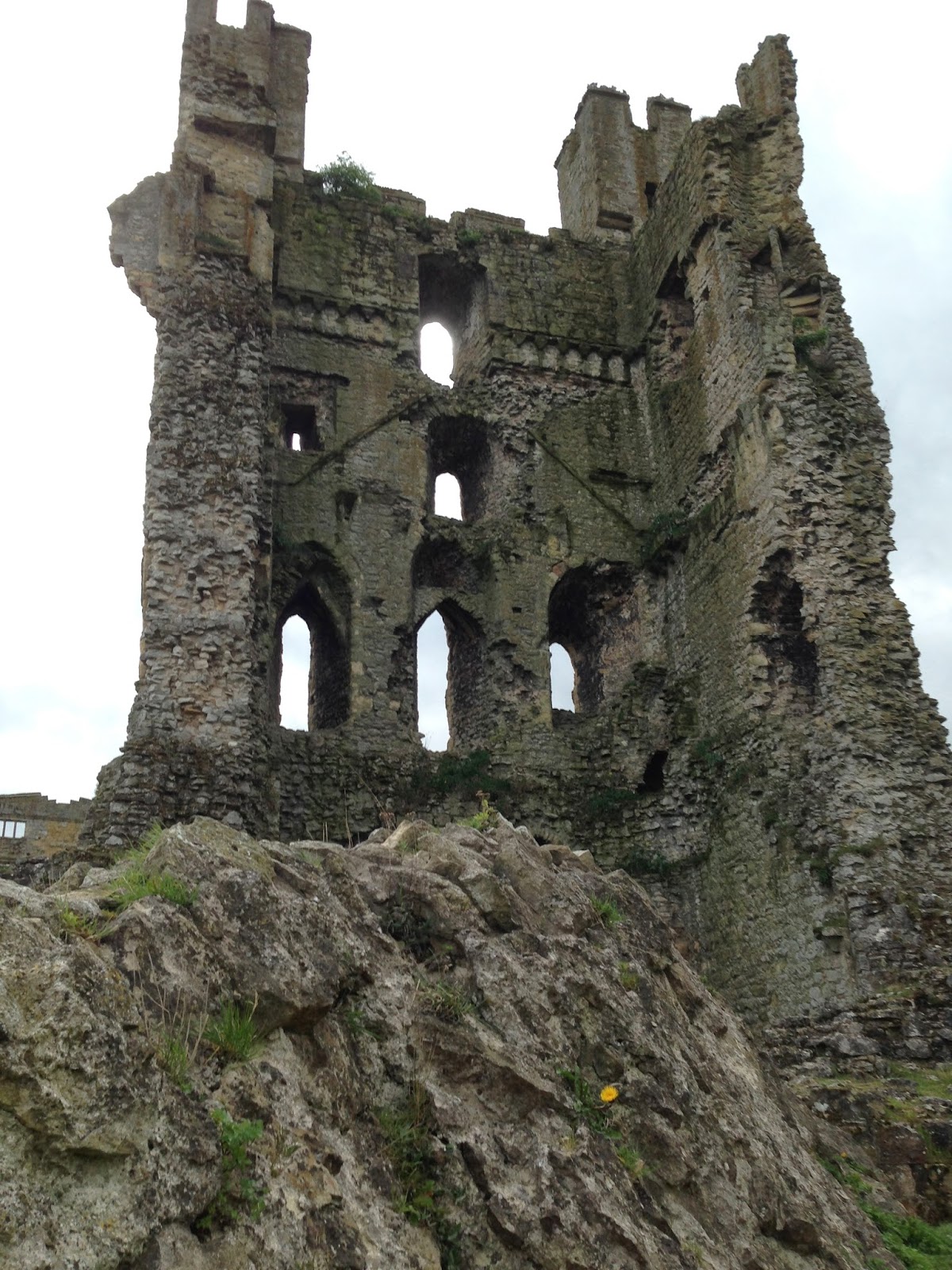 This (to return to the theme from which I have been distracted) once again shows how ruins affect us by making us engage imaginatively with them.
But on our day of viewing illustrious Yorkshire ruins, my daughter-in-law, a talented artist with a strong visual sense, suggested a third reason for the potency of ruins, apart from ruins’ ghosts and their attractive lack of utility. She said that ruins are interesting because their lines are simplified. They have the beauty of skeletons, or deciduous trees in winter. Everything that is unnecessary to the essential structure has been removed by time and history and we are, in effect, looking at the essential building without frills.
I add this to my own limited attempts to work out why ancient ruins are such powerful forces exerted on the imagination.

Frivolous and silly footnote: I made a Facebook statement about Helmsley Castle on the day we visited it. One of my Facebook contacts replied that it was “one of the ruins that Cromwell knocked about a bit”. I was glad that at least somebody else remembers raucous old music hall songs.
Posted by Unknown at 9:00 AM

Email ThisBlogThis!Share to TwitterShare to FacebookShare to Pinterest
Labels: On the Potency of Ruins, Something Thoughtful