NOTICE TO READERS: For six years, Reid's Reader has been presenting an entirely free service to readers with commentary on books new and old. Reid's Reader receives no grants or subsidies and is produced each week in many hours of unpaid work. If you wish to contribute, on an entirely voluntary basis, to the upkeep of this blog, we would be very grateful if you made a donation via the PayPal "DONATE" button that now appears at the top of the index at right. Thank you.] 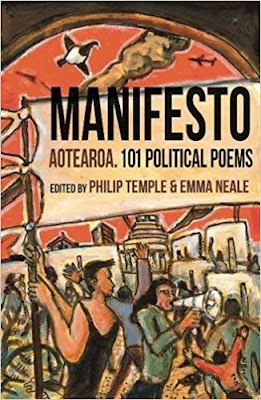 What is a manifesto?


As usually understood, it is a declared position, a call to arms, a plan of action, a public statement promoting a particular political party, ideology or world view.


And what is a political poem?


Once upon a time, a political poem was expected to be a poem about ideologies or political parties; or vigorous topical satire and the lampooning of specific politicians.


There are some examples of these things in Manifesto Aotearoa – 101 Political Poems, but they are not the norm of the collection. The two editors tell us that they put out a call for political poems, published or unpublished. They received over 500 poems submitted by over 200 poets, and whittled them down to the chosen 101. Only three poets are represented by more than one poem, so here are the works of 98 poets. From this scupulous mathematics, what I am saying is that this inevitably makes for a collection with a great diversity of viewpoints and “political” perspectives – not by any means a manifesto, except in the sense that it manifests the democratic process.

There are no poems of the call-to-arms variety, and few of the demotic type that would once have dominated a collection of political verse. I rate the merry ironic jingle of Kevin Ireland’s “A song for happy voters” as the most old-fashioned poem in terms of style, and Jeffrey Paparoa Holman’s “Check Inspector 29” (a protest at the lack of safety standards that allowed the Pike River Mine disaster to happen) as the poem most like a traditional folk ballad. But the majority of poets represented here write with the more ubiquitous current brand of cool, and sometimes sardonic, irony. It goes without saying that, where specific political issues are engaged with, the poets’ views are of the liberal-left. Given what the poetic community is, you wouldn’t seriously expect poems in favour of neo-liberalism or racism or environmental irresponsibility, would you? 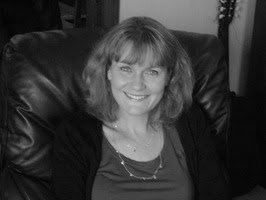 There is a joint introduction by the two editors, but each writes a separate introduction as well. Philip Temple’s introduction embraces enthusiastically Shelley’s familiar line that “poets are the unacknowledged legislators of the world”. According to Temple, political poetry arouses us, makes us more aware of the world we live in, and changes our attitudes. Emma Neale’s introduction is rather more nuanced. She notices that politicians and poets are both “sweet-talkers”, but that they use language in different ways, the poet by making us more reflective. Her text is Auden’s equally familiar line that “poetry makes nothing happen”, but she parses this to mean that poetry makes nothing impulsive and foolish happen, unlike the utterances of politicians. Poetry, she says, makes us more empathetic with our fellow human beings and so in that sense it does make much happen.


After these preliminaries come the poems themselves, which have been arranged into four very broad sections.


First there is Politics itself. This section includes poems on, among other things, the loss of state houses; the unlovely social habits of New Zealand  politicians in general; the unaffordability of real-estate; and student debt (the poem “Enlightenment” by Beverly Martens). David Eggleton’s poem “The (Andrew) Little Things”, being a jeremiad against named politicians, is the most “political” poem in the book in the old partisan sense of that term. David Howard’s impressive “A Display Case in the Museum of Communism” is a surreal version of its collapse. There are a surprising number of poems with a desolate Eastern European ambience (Chris Else, Ian Wedde, Koenraad Kuiper, Stephen Oliver); and Liang Yujing attacks the “great firewall of China” – the Chinese regime’s system of internet censorship.


The second section Rights deals, more or less, with specific groups in society. So there are poems advocating for mine workers and factory toilers; for people who have to work during holidays (Peter Olds); for women selling cheap veges on the roadside (Series Barford); for equal pay for women (Benita H. Kape); about trying to keep the kids warm when you’re poor (Nell Barnard); about lesbians (Heather Avis McPherson); about rape (Ruth Hanover); about the Treaty of Waitangi seen as an imperialst trick (Kani Te Manukura’s “tricks of a treaty”); about Pakeha and Palagi horning in on Pasfika and Maori culture (Mere Taito; Anahera Gildea); and quite a few bilingual poems drawing on Maori discontents.


In Environment, the third section, come laments at the colonisation and anglicisation of Maori animal names (Bridget Auchmuty); the homogenisation of landscape by New Zealand farming practice (Gail Ingram); the quality of water (Anthonie Tonnon); a post-earthquake Christchurch poem (Doc Drumheller); and the global climate crisis which could lead to the melting of the poles (Harvey Molloy)


When it comes to Conflict, the final section, the focus is much broader than New Zealand. Thus there is a reflection on the hoplessness of writing about Gaza (Tusiata Avia); there are two very different takes on the Middle East (Elizabeth Brooke-Carr and Peter Bland); there are many poems on refugees (Louise Wallace, Mercedes Webb-Pullman, Sarah Paterson, Victor Billot, Majella Cullinane); a few on war in general and disarmament (Catherine Amey, Emma Neale); and one on gang violence (Michael Steven).


In rushing superficially through the contents like this, I have of course name-checked only some of the poets in this book and only some of the themes taken up. I enjoyed the week I spent sauntering through Manifesto Aotearoa and found only one or two cases (which I will not shame the poets by naming) of soap-box rant. This is a good and wide sampling of current concerned opinions, in poetic form, on matters of moment.


Inevitably, though, an anthology tempts me to play favourites and name the selections I found really striking.


Let me begin with Helen Watson White’s apocalyptic poem “Water” (p.128), which I quote here in full. Deceptively simple, it works so well because of its device of ambiguity in a lack of conventional punctuation:


For want of a few


and the dead left no


article of faith in the


and frozen soup they


died as it were leaving


Should I be surprised that Vincent O’Sullivan delves deeper into what ails New Zealand than most poets do? His “To miss the point entirely” (p.24), begins “It isn’t good for a writer to live in a country / where a cut-price banker with his next-door smile / is all we have to throw stones at.” It concludes that in New Zealand we die “of being ourselves.” There is an implicit warning here that it is too easy in a political poem to blame others for the state we are in, rather than to examine our own failures or question the culture to which we contribute.


Should I be surprised that Richard Reeve (in his poem “Boom” (p.33 ) has the wit to see how High Culture can be suborned to the wealthy? Liberal mouthings are not necessarily accompanied by a hand-over of cash to those who really need it.


It was really to my surprise, however, that Diane Brown cut deepest into the assumptions of the liberal readership of this book. Her poem “Every Day My Name is Out There” (p.117) basically says that there are many good causes that should be supported, but that it’s too easy to turn support into mere perfunctory virtue-signalling.


A poem that really shook me was Ivy Alvarez’s “Manufacture” (p.65) about the crushing and wearing nature of working on the factory floor ; and close to it was the raw anger of  Nigel Brown’s “Abrasion” (p.66), which opens “The crude process of grinding down / invented by clever dicks / where you work longer hours for less / in the damp and fetid room / of inequality…” Them’s fighting words, thank goodness.


The most self-effacing poem in the book is Alison Denham’s “Occupy Dunedin”(p.113), about the small-scale of a political event, and its probable lack of impact. Nicola Thorstensen’s “Protection Order” (p.166), about violence both domestic and on the street, creates a remarkable sense of dread, yet ends with another line that will chasten those who overrate poetry’s reach: “This poem cannot save you.”


Another good poem that manages a major shift of tone is Carolyn McCurdie’s “Ends” (p.139) which is, quite credibly, at once horrified about major climate change, and optimistic about the human qualities that can confront it.


Finally the poem that I found myself reading and re-reading - Janis Freegard’s “Arohata” (p.87). It is a tough and unvarnished poem about the real physical experience of visiting a friend in prison. The first reading said this was simply reportage. The re-readings said it was much more – a work of compassion held together by its choice of detail.


Other readers will of course come up with other favourites. I hope all will find this as good a sampling of what upsets and moves poets in the public sphere as I did.