“THE INFORMER” by Liam O’Flaherty (first published in 1925)

When we reach the week that contains Saint Patrick’s Day, I always like to include a nod to Irish literature on this blog, which is why in the last four-plus years I have dealt with James Joyce’s Ulysses, Darran McCann’s After the Lockout, Liam O’Flaherty’s The Black Soul, and Terence de Vere White’s The Distanceand the Dark. I’ve also enjoyed forays into Irishry in such think-pieces as Me and James Joyce in that Order and Seamus Heaney 1939-2013 R I P and The Wearing of the Green and so Forth and Yeats the Art of Being a Fool. In the same spirit, this week I plunge into one work, which has provided an enduring image of Irishness, even if the image is as much the result of a Hollywood adaptation as of the original novel.

One Friday night when I was a teenager, I watched on (single-channel, black-and-white) television a film, which I ended up loving. It was John Ford’s 1935 version of The Informer, and it didn’t matter that television was black-and-white, because so was the film. 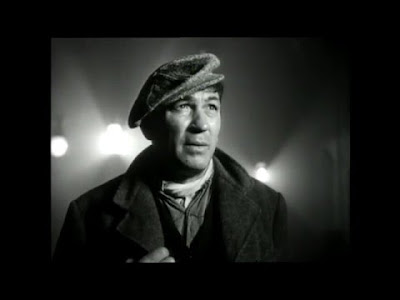 It was clearly set in Dublin in the ‘Tan War – that is, the Irish War of Independence  - in 1921. It concerned a big, very stupid, but basically likeable Irish mug called Gypo Nolan (played by Victor McLaglen) who is desperate for money because he wants to escape to America with his girlfriend Katie. Although Katie is clearly a prostitute (or at least as clearly as a film made in Hollywood in 1935 could imply), she is also basically a good girl. Anyway, Gypo’s old mate from the I.R.A., Frankie McPhillip, is wanted by the Black-and-Tans, and there are posters up offering 20 pounds reward for Frankie’s capture. And in his stupidity, and in his desperation to escape poverty, Gypo goes and informs on Frankie. The Black-and-Tans corner Frankie and kill him, and Gypo gets his 20 pounds blood money.
Flush with money, but also wracked by a primitive sort of conscience about what he has done, Gypo then proceeds to pass the rest of this Dublin night spending recklessly. He is mortally afraid that his treachery will be discovered, and the I.R.A. will come after him. But he leaves such an obvious trail of incriminating evidence that it is hard for anyone not to notice. He goes to the wake for Frankie being held at the McPhillips’ house and joins in the mourning, but his jittery behaviour, when there is talk about an informer, makes some people suspicious. He buys expensive whisky, which an impoverished slum dweller like him couldn’t easily afford. He treats a raucous crowd of hangers-on to a meal of fish-and-chips at a fish-fry. In a night-time establishment where people are partying (as clearly a brothel as a film made in Hollywood in 1935 could imply), he takes pity on this Cockney woman whom the rough Oirishry are ridiculing, and he gives her the money she needs to get back home to London. So it continues until the I.R.A. men are more than suspicious.

Gypo is haled before a secret, night-time I.R.A. court of enquiry. Gypo has at first told the I.R.A. commandant Dan Gallagher a story incriminating another man as the informer. But his lie is soon exposed and he is condemned to death by the court. No insurrectionist organization can live if it allows informers to go free. Gypo manages to escape, but he is mortally wounded by gunshots fired by his former comrades. It is now the early morning hours of a very long night. Early mass is being said. Bleeding to death, Gypo manages to stumble into a chapel where Frankie McPhillips’ mother is praying.
“Mrs McPhillip, ‘twas I who informed on Frankie,” says Gypo.
“Sure Gypo, I forgive you”, says Mrs McPhillip, “You didn’t know what you were doing.”
Exalted, redeemed, with his guilt suddenly lifted from him by the mother’s forgiveness, Gypo turns to face the crucifix, spreads his arms wide like one being crucified, and shouts “Frankie! Frankie! Your mother forgives me!” Then he falls down dead.
When I first saw the film, I almost bawled at this point.
Please do not snicker and please do cut me a little slack.
I was fifteen.
The death of Gypo Nolan was like the death of King Kong (in the original version), where you suddenly feel sorry for this dumb brute, destroyed by forces he doesn’t understand. Mrs McPhillip’s “you didn’t understand what you were doing” is the film’s judgment on Gypo. He did wrong, he caused another man’s death, but he wasn’t in control of himself. The great hulking fool was a tragic, pitiable victim.
Because I lived in a house filled with books of film history and film criticism, I at once looked up references to John Ford’s film (this was three decades before the internet, folks) and I discovered that the 1935 version of The Informer was widely regarded as a great film. It won four of the top Academy Awards for its year – Best Director (Ford), Best Actor (McLaglen), Best Screenplay (Dudley Nichols) and Best Score (Max Steiner). There were respectful analyses of it on my father’s shelves. Roger Manvell in his Film and the Public regarded it as one of the few true tragedies to be created by cinema.
About thirty years later, when video-recorders were still regarded as the latest technology, the film again appeared on television. This time I recorded it and was able to watch it two or three times. Time had moved on. I was well-read enough in cinema to know that younger, hipper critics (like Lindsay Anderson) now dismissed the film as pretentious, self-consciously arty and patronising. I was now a bit more uneasily aware of the film’s defects. There were, for example, the plainly non-Irish accents of some of the Hollywood players (the worst being Preston Foster in the role of the I.R.A. chief Dan Gallagher). There were so many fog-haunted night-time settings, reminiscent of German films in the 1920s, and the film’s very studio-bound nature. There was the plain sentimentality of much of it (Margot Grahame’s whore-with-a-heart-of-gold Katie). And I was now more aware of the genre to which it belonged. Lachrymose male melodrama of the sort that had victimised Jean Gabin running to his doom in movies like Pepe Le Moko, Quai des Brumes, Le Jour Se Leve etc. and that later had laconic tough guys being ruined pitiably in 1940s American films noirs. And yet Victor MaLaglen’s dumb lug performance was still appealing. And one of the phrases his Gypo uses, when he visits the wake for Frankie McPhillip, became for us a household catch-phrase whenever one of us wished to express sympathy for another who was feeling down in the dumps: “I’m sorry for your troubles, Mrs McPhillip”.
All in all, and making many allowances for its antiquity, I still thought it was a pretty good film.
*   *   *   *   *   *   *   *   *   *   *   *   *   *   *   *   *   *   * 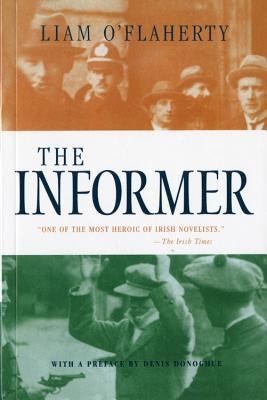 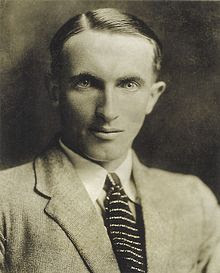 Why is O’Flaherty so condemnatory, so fixated on what is sordid and irredeemable in the Irish? I do wonder if, at the time he wrote The Informer, he wasn’t still smarting at the whole turn that the Irish struggle for independence had taken. O’Flaherty was a founding member of Ireland’s tiny Communist Party. He fought in the Tan war, and when the Treaty was signed, he was one of those who raised the red flag over the ruined Custom House in the hopes of promoting a socialist republic. But as Ireland drifted into chaotic civil war, he left the country in disgust and lived some years in England. The Informer reflects a lot of that disgust. Only the dumb brutes who suffer deserve our sympathy.
This is a long way from the vision the film offers, even if in old age (he died at 88) O’Flaherty was reconciled to both the church and a more traditional view of Ireland. In a way I’d say the novel reflects Ireland’s troubles as seen by an angry and disillusioned Irish working-class intellectual. The film presents a more sentimental view such as would appeal to Irish-Americans one generation removed from the old country.

Bizarre Footnote: I was aware that there was a British film version of The Informer made in 1929, six years before John Ford’s Hollywood version. I had always assumed it was one of those lost and forgotten films that one would never get to see when, surprisingly, I found the whole thing posted on Youtube. So I watched it. To my amazement, it proves to be even more sentimentalised than the 1935 version. Gypo betrays Frankie because they are part of a love triangle – they both love Katie. Katie is a wonderful and fine working class girl (no indication of her profession). There is some shooting but no real politics in the film. The police to whom Gypo informs are dressed like police. When Gypo is finally shot, Katie mourns at the loss of her one true love. In fact, Katie is almost made the main character in the film. The actress playing her (Lya de Putti) gets top billing. The finale in the church, however, is very much like the finale in the Ford version. Gypo lies dead with, falling upon him, a cross-like shadow created by a skylight. 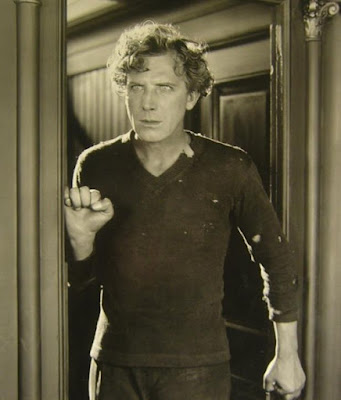 There are some interesting things about this creaky and ancient film. First, it was directed by a German, Arthur Robison, and its pictorial style is very much the ominous play of light-and-shadow of German expressionist cinema. In fact, pictorially, parts of it are like the 1935 version, and there’s the strong suspicion that Ford had actually seen this version before making his own. Second, Gypo is played by the (second-billed) Swedish actor Lars Hanson. Far from looking like a big Irish brute he, with his intense, intelligent face and swish of curly hair, looks more like a troubled romantic poet. But third, and most eerily, the film was made when British films were just switching to sound. For most of its length this is a silent film with sound effects (music and noises) but with dialogue conveyed in inter-titles. For about the last quarter, however, it switches to spoken dialogue, and this is a real shock. The voices that come out of all these Irish characters’ mouths are plummy middle-class English voices. Given that Lars Hanson was Swedish, I assume the very English voice attributed to him actually belongs to somebody speaking out of camera range as he mimes along. (This was the technique Hitchcock used when he had the German-speaking actress Annie Ondra playing a Cockney girl in his first talkie Blackmail.) I agree with one critic I read who said that the hollow, unreal voices sound as if they were being produced at a spiritualist séance. Weird.
Posted by Nicholas Reid at 9:01 AM

Email ThisBlogThis!Share to TwitterShare to FacebookShare to Pinterest
Labels: Liam O'Flaherty, Something Old, The Informer