ELECTRONIC LYNCH MOB
I know it is far too easy to indulge in hyperbole - to describe a minor irritant as a catastrophe or to present a small personal problem as something upon which the fate of the world hangs. So recently, when an American political commentator described the organised barracking of his foes as a “lynch mob”, he was roundly rebuked with a reminder of what a real lynch mob was like. Only hard words were exchanged, he was told. Nobody had been literally dragged from jail, beaten, tortured and then burnt or hanged. That was what real lynch mobs did. So mind your language and rein in your hyperbole, he was advised.
Fair enough.
Words on their own do not constitute a lynch mob.
And yet when I go on the internet and look at some corners of Facebook or at the comments that follow some postings on Youtube, I really do feel I am encountering the nearest equivalent to a lynch mob that the internet can offer. After one or two temperate comments, somebody throws an unconsidered, unthinking insult. The mob mentality takes over. The insult is repeated or amplified by others. The temperate comments are quickly crowded out as moderate-minded people decide they are wasting their time and withdraw. Often these verbal riots are over the most trivial matters (the worth of some singer or movie-star or joke). And such is the American dominance of the ‘net that the idiom and vocabulary of insult is often distinctly American – “retard”, “pussy”, “faggot” etc.
My younger children have given me some timely education by telling me that there are such things as “trolls” – people who deliberately make loud, bigoted, raucous and insulting remarks on-line simply for the fun of stirring people up and provoking an angry response. In other words, people with the mentality of a particularly sullen 15-year-old (which, doubtless, some trolls really are).
I also know that one is wasting one’s time in attempting to answer or moderate a troll-driven verbal lynch mob.
And yet sometimes I have lost my patience and been foolish enough to wade in.
Most of Facebook (or at least Facebook as I know it) consists of harmless, cheerful social interaction as people swap holiday or pet or baby snaps and mildly ironical comments on articles they’ve read on line; or draw readers’ attention to a forthcoming concert or social event.
But occasionally the lynch mob butts in.
Some months back, a sociologist put out a reasonable request for any people who were opposed to gay marriage for reasons other than religious conviction, and were willing to be interviewed. “I am looking for secular people who are opposed to gay marriage”, he posted.
“Adolf Hitler”, came a troll’s immediate witty rejoinder.
More comments of a like nature – apparently designed to block any response to the original request – followed. I made one or two comments trying to allow the original post-er a reasonable answer, but finally deleted my comments and withdrew. Unless it is over a matter of no particular moment, it is a waste of time trying to have a reasonable and nuanced discussion on Facebook.
Then there came what seemed to me an organised lynch mob called “Spell-Check a Racist”.
Let me be very clear about this one. “Spell-Check a Racist” holds up to ridicule examples of illiterate, semi-literate, misspelt or otherwise poorly-expressed propaganda material produced by racist organisations. Those who run it appear to be English, as the majority of examples they produce are from such outfits as UKIP, British white supremacists and others. The aim of the site is to expose racists as idiots because of their poor writing skills.
Now while opposing racism is obviously an admirable enterprise, my own view is that this is absolutely the wrong way to go about it. As I read it, “Spell-Check a Racist” simply gives superior, literate people the excuse to look down on semi-literate twerps. But if the issue is racism, isn’t the matter of literacy at best a side issue? The ideas and influence of racists are the real issues.  By all means educate or enlighten racists out of their bigotries if you can; by all means expose any falsehoods they express; but to pillory their lamentable verbal skills is merely to give them a sense of grievance. I suspect that a real racist, ridiculed for poor grammar and spelling, would simply assume that he/she was being attacked by supercilious snobs [if he/she knew the meaning of supercilious], would add resentment to bigotry, and would redouble his/ her hatred.
I remember a long-ago episode of the old Australian satirical series Frontline, in which the gormless [fictitious] front-man “Mike Moore” chose to ridicule Pauline Hansen and her anti-immigrant rants by drawing attention to the fact that she was working-class and worked in a chip shop. A wiser person had to inform him that these things were no reason to ridicule anyone, especially if your aim was to satirise racism. That is approximately how I react to “Spell-Check a Racist”.
Anyway, I expressed similar objections in the reply part of the site – and provoked a storm of angry comments and denials.
In this case, however, it had a happy ending. The guy who moderates the site actually engaged in a reasoned on-line discussion with me, conceded some of my points, but still said “Spell-Check a Racist” had some educative value. He even “liked” my final remark – so no harm done and the moderator proving to be a more thoughtful guy than some of his followers.
In this case, the lynch mob was halted in its tracks – but it did give me another timely reminder not to intervene over contentious matters on-line. 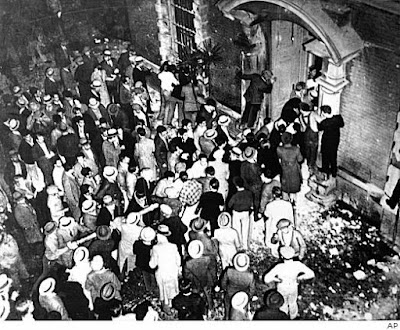