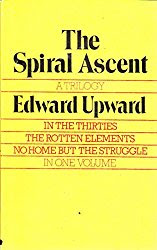 There are writers who are mentioned in nearly all the literary histories of their age, without themselves ever becoming widely read. There are usually good reasons for this. Case in point – Edward Upward (1903-2009), who died at the age of 105, long after the era with which he was obsessed. I know he had an odd name and I recall one of my tutors at university, 40 years ago, saying that he at first assumed it was a pseudonym until he discovered it really was the author’s name.
Edward Upward is one of those minor writers who seem doomed to be remembered only as footnotes in the biographies of more illustrious literary associates. In the 1930s, he was a close friend and advisor to his schoolmate Christopher Isherwood, and later to W.H.Auden, even though he himself was not homosexual as they both were. Isherwood and (at least at first) Auden saw him as their literary master, took ideas from him, and submitted work to him for his approval. Upward appears as “Allen Chalmers” in Isherwood’s memoir Lions and Shadows and Upward allowed some of his short stories to be published under that fictitious name. He had a certain success with some poems and with a surrealistic novel. 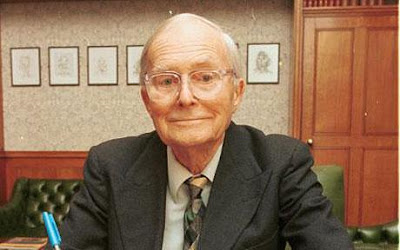 Then he published nothing for about 25 years. He married, had a son and a daughter, and taught at a minor public school for thirty years, where he kept his political views to himself although he remained very much of the Hard Left in his activism.
His trilogy of autobiographical novels The Spiral Ascent is his attempt to say the “last word” about his twin obsessions – poetry and politics – and helps explain his long silence. It took him over fifteen years to write. The first two novels, In the Thirties and The Rotten Elements, were originally published – years apart – in the 1960s, but they are so much of a piece that it is hard to see how they could ever have been read separately. Heinemann publishers accepted these first two novels, but they both received almost universal raspberries from critics for their bland and dull style. Heinemann therefore rejected the third novel. They were induced to publish a one-volume omnibus edition, under the title The Spiral Ascent and including the third novel No Home But the Struggle, only when they received an Arts Council grant to do so.
In the Thirties introduces Alan Sebrill – transparently Upward himself – disillusioned with his futile, lazy, middle-class life, frustrated that his attempts to write poetry have led nowhere, and on the brink of suicide. He finds a purpose and a sense of solidarity only when he joins the British Communist Party. By novel’s end he is married to Elsie (a fellow Communist), rearing for the fight against Fascism, Imperialism and Capitalism and convinced that his new sense of meaning will enable him to write good and meaningful poetry. Some critics have noted that this is one of the few novels originating in the 1930s (albeit written thirty years later), which depicts homegrown British Fascism as a real threat.
But The Rotten Elements is a rather more depressing work. After the Second World War, Alan and Elsie have to leave the Communist Party (as Edward Upward and his wife Hilda did in 1948) – not because they have lost faith in Communism, but because they believe the British Party has deviated too far from basic Marxist principles. Yet the alert reader will note that in fact Alan is more of a Stalinist hard-liner than his fellow-Communist antagonists are. The novel is shot through with an element of distrust almost amounting to paranoia. There are suggestions of police spies, party factionalism, infighting and complete intellectual dishonesty in the leadership. As he is fictionalising straight autobiography, Upward seems to be settling some old scores in the characterization of some of his fellow Communists – literary portraits of obscure CP members, which will mean nothing to most readers.
Throughout The Rotten Elements, Alan’s mind swings, like a too-mechanical metronome, between devotion to poetry and devotion to the continuing class struggle.
By cataloguing facts about the physical world and social tensions, the first two novels have some documentary value. But Upward’s secondary characters are unconvincing stereotypes – they have that awful Shavian tendency to be mouthpieces for ideological viewpoints, or social “types”. There is a stilted, self-expository quality to much of the dialogue, although it can be an advantage, where clarity is concerned, in scenes of polemical debate.
Alan Sebrill is supposedly intensely concerned with world affairs and literature. Yet he is insensitive to many of the important events of his age. Not once do we hear of him reading a contemporary novel, poem or play. He constantly worries about the effects on him of “the habits of a middle-class upbringing”, and yet we are told nothing about his background. It is as if the author has put himself in a straightjacket by concentrating so exclusively on political matters that he takes his main character’s bourgeois background as read.
Only in the third novel, No Home But the Struggle, which was first published as part of the single-volume trilogy in 1977, does Upward really let it all hang out. Now living through the 1960s, Alan Sebrill confines his political activities to the Campaign for Nuclear Disarmament and believes he has at last achieved a balance between poetry and politics. The bulk of the novel is taken up with all those things he suppressed in the first two volumes of the trilogy – memories of childhood and family friends; schooling; adolescent love-affairs; student days at Cambridge; friendship with Richard Marple (i.e. Christopher Isherwood) and the first stirrings of poetic inspiration. Upward drops his earlier subterfuge and writes directly in the first person.
In its richer variety of events, and the greater honesty of its style, No Home But the Struggle is certainly the most readable of the three novels. But again alert readers will note what Upward misses out many of the things that would have been essential to the life like Upward and his fictitious alter ego. The 1950s, the matter of Hungary, and a new wave of disillusionment sweeping Western Communists, simply aren’t here.
After the nearly 800 pages of the whole of The Spiral Ascent, what is the world-shattering conclusion Alan Sebrill reaches? Only that a poet cannot be free if he subjects himself to the rigid dogma of any political party. This conclusion was no doubt a major turning point in Edward Upward’s life. But I suspect most readers will have reached it about 700 pages before his hero does. And he when he does reach it, one still detects a wide streak of sentimental Stalinist nostalgia in Upward’s other self.

Confessional Footnote One: I first read The Spiral Ascent when I was in my twenties, and reviewed it for the now-defunct Auckland Star (4 February 1978 to be precise, if you have a way of checking). I have cannibalised that review here, after reacquainting myself with Upward’s trilogy.
Confessional Footnote Two: I have not read a newly-published biography of Edward Upward, Peter Stansky’s Edward Upward: Art and Life. I have only read reviews of it in some English publications. Apparently Stansky argues that, as a literary figure, Upward was really killed by his adoption of Stalinist “social realism”. Stansky also remarks wittily that Upward “became very well known for being forgotten.” Quite.

Posted by Nicholas Reid at 9:01 AM

Email ThisBlogThis!Share to TwitterShare to FacebookShare to Pinterest
Labels: Edward Upward, Something Old, The Spiral Ascent