“THE BIG SLEEP” by Raymond Chandler (first published in 1939) 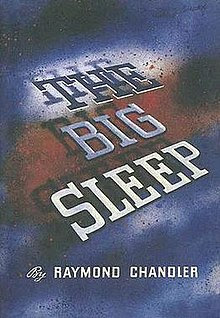 Detective stories are one thing. I’m happy to read good ones when I get the opportunity (see the posting on Simenon’s Maigret novels). But private eye novels are something else. Detective stories have a beginning, middle and end – problem, investigation, solution – and appeal to the idea of strict reason. Not only are private eye stories limited to a particular era and place – basically big-city USA between the 1920s and 1960s – but, even if they do have elements of detection and mystery-solving, they rely on intuition, atmosphere and surprise rather than orderly investigation. So private eye stories are really a hybrid of the detective story and the straight thriller.


Case in point – possibly the best-known of all private eye novels, Raymond Chandler’s The Big Sleep. It is widely acknowledged that Chandler (1888-1959) constructed his first novels by pasting together and then modifying short stories he had previously written for pulp magazines such as Black Mask. Thus was The Big Sleep composed. No wonder, then, that much of the action is not entirely logical – but then if logic is your thing, you would not be reading a private eye novel. A mystery appears to be solved when another mystery is piled upon it. People are murdered for reasons that are not entirely clear. A man walks through a door with a gun, utters threats and often has nothing further to do with the story. So it continues. The atmosphere of either menace or seediness. The sock on the jaw. The gunshot. The private eye grimly pursuing his goal in a corrupt world. 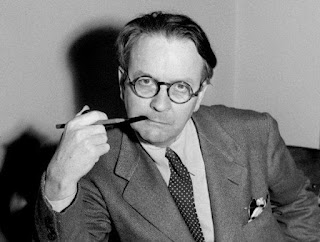 Remember how The Big Sleep starts. General Sternwood hires Philip Marlowe to
deal with a bookseller called Arthur Geiger, who is attempting to blackmail his younger daughter Carmen. Marlowe follows the guy, and learns he runs a pornography lending library. But then Geiger is killed and Carmen is drugged and found unconscious and naked in front of a camera, from which the film has been stolen. This in turn (after many more encounters, slugs on the jaw etc.) leads Marlowe to discover who had it in for Geiger – a guy and his mistress who wanted to take over the porn business.

But having cracked this case, and even though he is not asked to, Marlowe goes on to investigate the other matter that is troubling the Sternwood household – the disappearance of the no-good husband of General Sternwood’s elder daughter Vivian.


Contrary to popular myth, there is ultimately a clear explanation as to all the whodunits and whydunits, and the story has a fine sense of completeness. General Sternwood’s older daughter Vivian – and a whole raft of dubious characters – are covering up for the murderous actions of General Sternwood’s young, nymphomaniacal and epileptic, daughter Carmen. The only unexplained element is the death of a very minor character (a chauffeur). 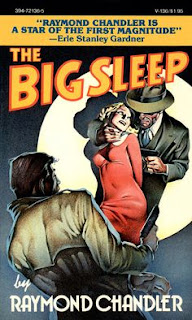 At the same time, there are two major elements of fudging. First, the reason General Sternwood hires Philip Marlowe in the first place is very trivial (he wants Marlowe to follow up a basically unthreatening, half-hearted attempt at extortion). It is hard to see why this would in itself keep Marlowe on the case, without having the convention that Marlowe (like the reader) simply wants to get to the bottom of things out of sheer curiosity. Second, between setting up the mystery and its resolution, many characters are introduced for the momentary thrill of the confrontation or the action scene and in fact have nothing to do with the ongoing plot.


It is hard to read whole sections of this novel now without hearing the voices of Humphrey Bogart and others from the Hollywood movie version which Howard Hawks directed in 1946. The slang and situations are to some extent as in the movie version, though elements of the story are far beyond what the Hayes Code would have permitted in those days. A pornography ring (regarded with proper horror and disgust by Philip Marlowe) figures in the novel, as does the nymphomaniacal younger daughter Carmen hurling herself naked into Marlowe’s bed as bait. And, in the novel,  Marlowe’s relationship with the older daughter Vivian (or for that matter with any woman) does not develop even as far as the tough guy romanticism between Humphrey Bogart and Lauren Bacall in the movie. In fact there is no love interest at all in the novel, and Vivian is almost as venal a person as Carmen. 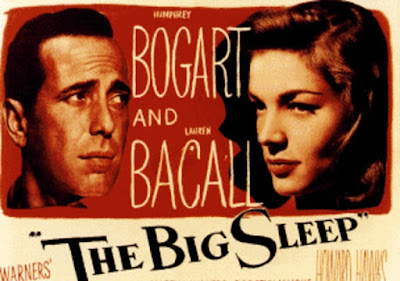 On watching Howard Hawks’ movie a week or so after reading the novel, I was surprised to find how closely it followed the novel in terms of situations and general plot. But the part of General Sternwood’s elder daughter had been built up to make a starring role for Lauren Bacall. Also, because of the Hayes Code and the lack of explicit mention of pornography, it would have been hard for an unsophisticated audience to work out who was being blackmailed by whom, and why.


Raymond Chandler’s first-person narrator Philip Marlowe is a blank upon whom we write – we learn nothing of his background – which may be one reason why we can so easily project the movie image of Bogart onto him. It is ironical that on two separate occasions (in a story set in Los Angeles and Hollywood), Marlowe complains that tough guys are now learning their speech and mannerisms from the movies.


There are some interesting cultural notes: “Fags” and “fairies” are regarded with contempt and disdain; Marlowe works for small money and does not expect anything more; the rackets which are busted are mainly small scale; and while some police are depicted as corrupt, Marlowe still sees himself as being more-or-less on the side of the police and is easy in their company. “Loogan” [meaning a guy with a gun] was a new one on me, and “That’s how people get false teeth” was a typical response to a sneering remark. 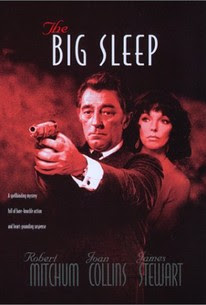 The 1946 movie may have been a tad coy and euphemistic. On the other hand, some months after reading the novel I hired a DVD of the ridiculous (1978) British-made remake, starring an over-aged Robert Mitchum as Marlowe. (In his heyday he would have been great in the role, but he was simply past it.) The remake was able to have all the explicit plot points that were pre-censored out of the earlier version, yet it was a much duller film, lacking urgency and nerve. A miscast Candy Clarke played the nymphomaniacal young daughter, and the stuff concerning pornography now looked very silly, for all its explicitness.


One can still read the book itself as good dirty fun.
Posted by Nicholas Reid at 9:01 AM

Email ThisBlogThis!Share to TwitterShare to FacebookShare to Pinterest
Labels: Raymond Chandler, Something Old, The Big Sleep