So what is your attitude towards the removal or destruction of historical monuments which some people now find offensive? Although it is not a new phenomenon, there has been much discussion about it over the last year because of attacks upon monuments to the old Confederacy, in some southern parts of the United States.


I confess that I am in two minds about the whole issue. 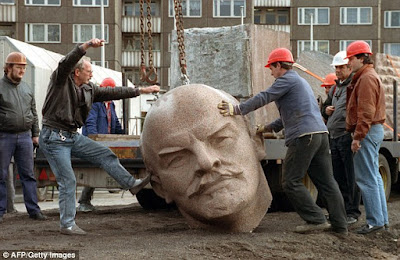 Of course we approve when we see old newsreels of American soldiers blowing up the huge swastika that overlooked the Nazis’ Nuremberg rally site. Of course we remember with pleasure that, when the old Soviet Union collapsed, the peoples of Eastern European countries gleefully tore down all those dreary statues of Lenin that had been imposed upon them. It was fun, too, to see the statue of Felix Dzerzhinsky, the founder of the Soviet Union’s secret police, being toppled in Moscow itself. (But alas, under the new-style autocracy that is modern Russia, statues of Dzerzhinsky have been re-erected in places).


Where the symbols of totalitarian regimes are destroyed by those hoping for democracy, there seems to me to be no ethical problem. 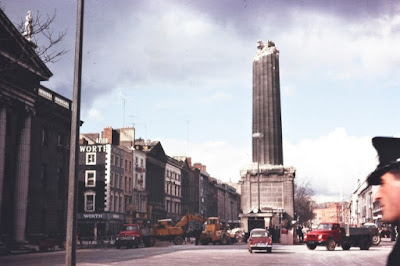 And (shameful confession here), I must admit to sometimes being amused at demolitions that were not aimed at a totalitarian regime. Good on the IRA splinter-group that blew up Nelson’s pillar in Dublin in 1966, say I. It was intended by its creators to be a sign of English dominance – one of those cultural reminders of Irish submission, saying in effect “croppies lie down”. It had no place in the Irish capital. Near where it once stood, there is now a statue of the Irish socialist Jim Larkin.


But what about situations in which a population is divided over the worth of an old statue or monument? 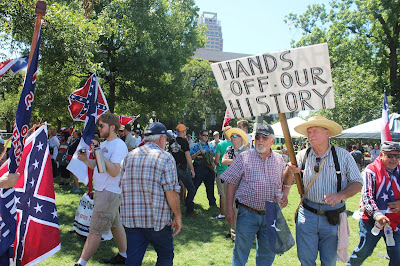 Some white southerners in the USA still have heroic ideas about the “lost cause” of the Confederacy, and resent initiatives to remove or demolish statues to their military heroes. For others, however, the Confederacy represents the defence of slavery; and any physical reminders of the Confederacy merely give it respectability. I can fully understand African-Americans’ desire to remove monuments of Confederate General Nathan Bedford Forrest. He may have been a skilful cavalry commander, but he was also notorious for his rabid upholding of slavery, for massacring any dis-armed black Union soldiers whom his men had captured, and for being a founder-member of the original Ku Klux Klan. Really not a man who deserves to be honoured in a town square. 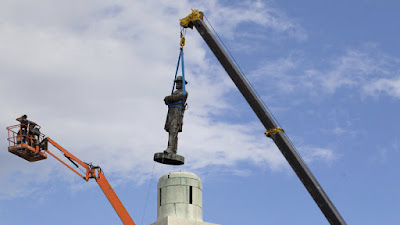 But what about (apparently) more honourable Confederate soldiers such as “Stonewall” Jackson and Robert E. Lee and others? Do their statues really deserve to be torn down? When this was being discussed in 2017, my own opinion was that if statues of such men were deemed offensive, then rather than tearing them down, there should be erected next to them monuments to Booker T. Washington, Sojourner Truth, Frederick Douglass, Harriet Tubman, Martin Luther King and other people who worked for liberation. But my argument hasn’t flown. By now, dozens of Confederate monuments have been removed, including the large statue of Robert E. Lee that stood in New Orleans.


Why am I being so delicate about this matter?


First, I think removing monuments and statues of which we now disapprove can be a species of sanitising the past – in effect of pretending the past never happened. This can be at one which the distortion which I mentioned on an earlier post about so-called “historical” novels (see Like Unto DNA for Dinosaurs) - the distortion which says that all the people worth remembering from the past must have had exactly the same set of values that we have. We ignore the fact that people who upheld what we now see as bad causes can have behaved personally with great courage.


Second, encouraging the destruction of disapproved monuments can be a never-ending process, if we choose to call out everyone from the past who held values of which we no longer approve. In America itself there are calls (as yet, not from a majority of people) for reminders of Christopher Columbus to be destroyed – after all, didn’t his arrival lead the way to mass extermination of North American indigenes by Europeans? And what about the slave-owner Thomas Jefferson or that rank imperialist Theodore Roosevelt? Obviously they should be expunged from Mount Rushmore. And so on and so on, with the sort of hysteria and overstatement that now seems typical of American public discourse. 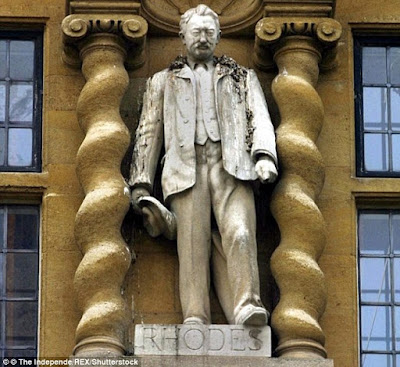 Meanwhile on the other side of the Atlantic, there was a “Rhodes Must Fall” movement in South Africa, which led to the demolition of statues of the British imperialist Cecil Rhodes. Quite understandable, I think, in a country coming out from under the heavy hand of white domination. The push to remove a statue of Rhodes from Oriel College at Oxford University in England was, however, unsuccessful – partly because the Rhodes Trust threatened to withdraw the funding of Rhodes Scolarships, granted each year to many international students, including some of the very ones who were railing against this imperialist statue. (I pause here to note that I think Rhodes was a reprehensible figure and he is no hero of mine – but this does not alter my argument about how pointlessly destructive such removals can be.) While we’re about it, why not demolish all statues of that arch-imperialist Winston Churchill, architect of the foolish and destructive Gallipoli campaign?


We had a taste of this destructive impulse in New Zealand. During the 1995 protests in Moutoa Gardens in Whanganui, the statue of the Liberal premier John Ballance was beheaded and effectively destroyed. This was in part for his racial views, typical of his times but now seen as anti-Maori. It was shocking to some, inasmuch as Ballance is generally interpreted as the leader of a New Zealand’s genuinely progressive political party. Understandably, there are ongoing efforts to have his statue reinstated, even if not necessarily in the same place.


I must end with another question. If we were to remove, from every country,  statues of, and monuments to, ALL monarchs, mayors, soldiers, conquerors, politicians, statesmen, artists, poets and scientists, of some of whose values we no longer approve, how many public statues would there be left in the world? My guess is – virtually none. We would have succeeded in pretending that the past never existed.
Posted by Nicholas Reid at 9:00 AM

Email ThisBlogThis!Share to TwitterShare to FacebookShare to Pinterest
Labels: Let's Pretend It Never Happened, Something Thoughtful