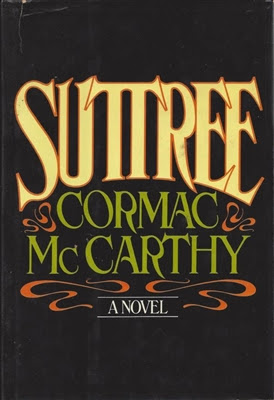 As I’ve often remarked on this blog, not even the most dedicated bibliophile (such as I) can possibly read everything that is worth reading. And sometimes my conscience is pricked when I hear the praises sung of a contemporary author, none of whose works I have ever read. For me, one such author was Cormac McCarthy (born in 1933, as Charles McCarthy). He is rated by some as one of the USA’s greatest living novelists. Sure, I knew of the man from seeing some of the films that have been made from his work ( No Country for Old Men and The Road) but I had never opened any of his novels.


So on a recent holiday, I cracked what I’d heard called McCarthy’s masterpiece, Suttree, first published 40 years ago in 1979. I decided to read it “cold”, without referring first to anything that has been written about it – not even the blurb of the hardback I was reading.


Suttree has a virtuoso opening. It begins with four pages of nothing but descriptive scene-setting. We are presented with what seems to be a nightmare world, a little like Hell (or perhaps Purgatory) with a river running through it. Only when we are some pages in do we understand that a real place is being described – Knoxville, Tennessee, through which runs the Tennessee River. Put the Southern setting together with the nightmarish description and at once we reach for that tired term “Southern Gothic” to explain the effect – but that is underestimating what McCarthy is up to, even if he does touch on the genre. Little indicators here and there tell us that the time is somewhere in the early 1950s – the type of cars that are mentioned, the prices given, the lack of TV when it was on the point of becoming ubiquitous etc etc.. 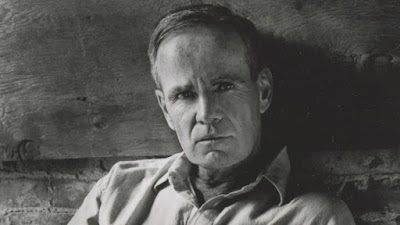 We are in the world of bums and vagrants, hoboes and tramps and petty criminals, but the story is set before first the Beats of the ‘40s and ‘50s and then the Hippies of the ‘60s made being a vagrant or drifter a fashionable pose. McCarthy’s characters are real outcasts, and not middle-class kids playing at being poor before they go back to the suburbs. To describe them as “eccentrics” would be to soften them and make them sound like something out of Saroyan. These people are the desperate dregs. They live in tin shacks along the river, or sleep rough under bridges and viaducts, and they hang around in pool-rooms, bars, pawn-shops, one-night-cheap hotels, brothels and boarding houses. I have read few books that so often mention vomit, excrement (like the “beard of shit” seen in an unflushed outhouse), ripe pimples waiting to burst, smashed-up blood-soaked bodies and the like. Refusing to be PC (because Suttree was written before there was such a thing), the supporting cast includes “niggers” (so called), “whores” (so called), “catamites”, “fairies” and “faggots” (so called).


Suttree (only well into the novel do we learn that his first name is Cornelius) earns a meagre living by fishing in the Tennessee River. Early in the novel, it is made clear that he came from a well-off family, that he went to university, and that he had a young son who died – but he was so alienated from his family that he could only spy on the boy’s funeral from a distance. His family hates him. So what went wrong and who is Suttree really? This is one strand of narrative that keeps us reading.


The novel is not all told in chronological order, so there are some jumps backwards and forwards in Suttree’s life. It is also very, very episodic – picaresque, in fact. Suttree meets many people, and in a world of aimless bums he is a steadying figure. 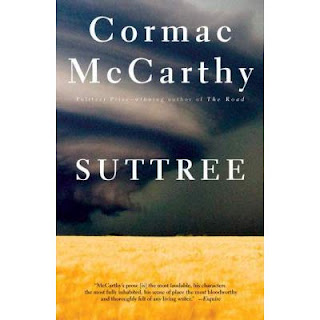 He acts as mentor to some younger and stupider bums, such as the 18-year-old Gene Harrogate, who has a perverse sex-drive and is introduced into the novel when he is caught copulating (literally) with watermelons in a watermelon patch. Gene drifts in and out of jail a number of times and frequently cooks up ridiculous schemes. Without a farmer’s permission he slaughters a pig to sell the meat (McCarthy being the author he is, we get all the oozing, steaming guts as the pig is killed). When he hears there is a bounty being paid for eliminating bats, Gene finds a way of killing bats by throwing them poisoned meat from a flipper. He tries to blow up Knoxville’s underground tunnels to get into the town’s treasury. Later, he has a system for stealing coins from parking meters. Most of his adventures read like that most American of prose forms, the tall story, with shades of the Southerner Mark Twain; all of them end badly, and it is often Suttree who has to pick up the pieces. Elsewhere in the novel, Suttree has to solve problems created by another youngster, Larry, who has to dispose of the unwanted and decaying corpse of his father.


There are other, more stable characters in Suttree’s life, such as Joe, a steady-minded “nigger” (though in his case he is more often called “black”) who has the same sort of quiet maturity as Suttree himself.


With all the male vagrants and bums, this is a very homosocial world. The women encountered most often are prostitutes, ogled by, and used by, and discarded by, those bums who (momentarily) have a little money. Only late in the novel does Suttree get involved in any way with women. One is an under-aged girl, whose sexual attraction is described in explicit detail (although the sexual act itself is not). Another  is Joyce, a brisk and experienced prostitute from up North. Whether she is just stringing Suttree along, or aiming to make him her pimp, is never made quite clear. Anyway, both entanglements end badly (and in one case a little too conveniently, if I can say as much without spoiling the plot).


Being a Southern novel, Suttree comes complete with Bible-bashing patriarchs, crazy booze-drenched street preachers and that Old Time Religion as bellowed by Protestant fundamentalists. All this makes Suttree himself a bit of an anomaly in the Baptist Bible Belt. For if you are sensitive to such things (as I am) you note little details here and there that suggest Suttree comes from a Catholic background. Purgatory is mentioned here. The Madonna and the Pieta are mentioned there. The Rosary is mentioned elsewhere. It becomes explicit when Suttree describes himself as a “resigned Catholic”. While helping Larry bury the unwanted, decaying corpse, Suttree suggests that it might be appropriate to say a prayer. Larry says his father had no time for religion and Suttree says he knows only the Catholic prayers. Larry says whatever his father was, he certainly wasn’t a Catholic, and there the matter rests. Only about three-quarters of the way through the novel is there a long sequence where Suttree sits in Knoxville’s Catholic Church of the Immaculate Conception, giving his disenchanted memories of having been an altar-boy, surveying the statues half-regretfully, but nevertheless dismissing Catholicism as “Christian witchcraft”. And yet… and yet… oh well, I’ll deal with the “and yets” later.


Towards the end of the novel, Suttree is hospitalised with typhoid fever and hallucinates with apocalyptic images. As he is dragged, in his hallucination, into a hell of bums and whores, a nun grabs him by the elbow and begs him to get away from such company. Later, in real life, a priest turns up at the hospital and attempts to give Suttree the last rites. “Do you want to confess?” asks the priest. Jokingly, Suttree replies “I did it!” But later he says to the priest “You don’t understand. There’s only one Suttree.” And that, it seems to me, is both Suttree’s vindication of himself and Suttree’s weakness. He is asserting his indivduality, uniqueness and self-reliance without a religion or imposed code of conduct. But he is also admitting his separation from the rest of humanity, his aloneness, his lack of solidarity.


This, I think, gives you the substance of the novel’s ideas. But how are they conveyed? What of the prose style? The dialogue of Suttree alternates between the terse and the wild, crazy, often obscene idioms and metaphors of “poor white trash”. But when the authorial third-person voice takes over, as in the opening pages, the prose is elaborate, majestic and poetic, often giving a mythic colourimg to the doings of bums and hoboes. I understand how this could easily be accused of being overblown and bombastic (as, indeed, it sometimes is). It is very much language in the American grain, big-scale, inclusive, addressing the universe like Walt Whitman. But I think the style works. Implicitly the style says that these people see their own lives as epic. To scrabble for fish in an urban river; to attempt to profit by selling worthless “pearls”; to try to make an impression in order to attract whores – for the novel’s people, these things are heroic deeds. The language, in effect, gives them dignity. It strikes just the right tone for a wonderful scene where Suttree interacts with an old aunt, looking at an ancient photograph album of faded images and understanding the destructiveness of time. Here McCarthy writes like a poet.


And what about the after-match function, after I’d read the novel and made my own judgements and when I did a little background research and discovered what other people thought? I discovered that the novel has a large autobiographical element. Though born up North, Cormac McCarthy was brought up, from a young age, in Knoxville, Tennessee, attended a Catholic school there, and was an altar-boy at the Church of the Immaculate Conception before going on to lead a church-less and sometimes turbulent adult life (three marriages, three divorces).


Not that this means the rest of Suttree’s experience was anything like McCarthy’s.


Apparently, too, McCarthy laboured long over this novel, taking about twenty years, from the late 1950s to publication in 1979, writing and re-writing it even as he was already producing other novels. I’m interested to find that, with Suttree’s stoic attitude to life and with the wild shenanigans of Gene, Larry and others, some critics have interpreted it as a great comic novel – a long tall story. There have also been the inevitable comparisons with other Southern writers – Faulkner with his inspired idiots; or down-and-dirty Erskine Caldwell, though its hard to see how his demotic style has anything in common with McCarthy’s.


Most interesting, however, (and here we come to the “and yet” matter that I mentioned earlier) was an article I found, on-line, in a Jesuit magazine. The critic noted that half-a-century back there were Southern writers who were committed Catholics ( Walker Percy and especially Flannery O’Connor). But now American novelists of Catholic background tend to be ex-Catholics (Cormac McCarthy and Don DeLillo). Nevertheless, said the article, intentionally or otherwise, Suttree is saturated with Catholic tropes and concepts, and in its main character, the novel shows somebody searching desperately for meaning in a world from which God has been removed. It is, in effect, a picaresque examination of the “God-sized hole” in post-Christian consciousness.


You’re free to disagree, but frankly, I think this is a perfectly valid interpretation.
Posted by Nicholas Reid at 9:01 AM