We feature each week Nicholas Reid's reviews and comments on new and recent books. 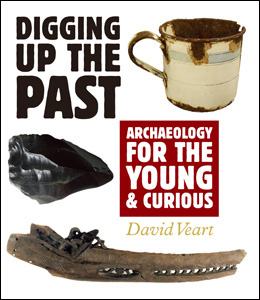 “DIGGING UP THE PAST – ARCHAEOLOGY FOR THE YOUNG AND CURIOUS” David Veart  (Auckland University Press – in association with Auckland Council,  $39:99)
“PLANET WORD” J.P.Davidson (Michael Joseph/ Penguin Books, $50)
It’s nearly Christmas, and I’m thinking of new books that I’d really like to give people for the fun of it. Books that would bring them both harmless pleasure and some solid instruction. Sorry to sound so right-thinking about it, but in the end pleasure and instruction really are my two essential criteria for good non-fiction books. 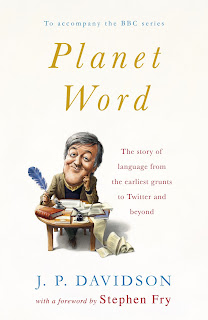 I think I’ve found two books that fit the bill, and conveniently one is aimed at intelligent teenagers while one is aimed at adults.
David Veart’s Digging Up the Past is the one for teenagers and it’s to be hoped that school libraries will snap up copies of it. It is a simple and sprightly introduction to archaeology in 104 large, accessible and well-illustrated pages. As this is a specifically New Zealand production (Veart is a DOC archaeologist), all its examples of digs, discoveries and forms of evidence are New Zealand ones.
Veart takes his young readers through carbon-dating and how it was part of the technique used in disproving Andrew Sharp’s “drift” theory of Maori navigation. He shows what can be deduced from the footprints (caught in ancient volcanic ash) on Motutapu. He considers how earlier archaeologists were often mistaken in their attempts to reconstruct moa, and he gives a vivid account of the moa bones on the Wairau Bar.
For young readers, new concepts are introduced with suggestions for hands-on experiments. Veart cheerfully advises kids to go through the week’s rubbish bag to work out the order in which rubbish was discarded. This leads into a discussion on the importance to archaeologists of middens and coprolites (fossilised poo). Reconstructing the complex engineering of Maori pa leads naturally into the uses of aerial photography in archaeology. How many kumara pits, ancient walls and terraces would have remained undetected if not seen from the air?
Veart also covers archaeology in urban sites (the uncovering of Dunedin’s ‘corduroy’ street) and includes a stirring account of the wild-goose-chase for the early  sea-planes that were supposedly hidden in Auckland’s North Head. Veart’s definitive solution (he was one of the archaeologists on the case) is that the planes were never stored there. They were destroyed, and some parts dispersed and sold-off, in the 1920s.
Digging Up the Past may not have the most original title in the world. (When I was a teenager, I read Sir Leonard Woolley’s venerable introduction to archaeology which has the same title). But it doesn’t matter. Veart’s book has an intelligent and engaging text and the images are 50% of its worth, from those huge kauri logs jammed in an ancient race, to the shots of a nineteenth century Chinese gold-diggers’ settlement.
Planet Word is a different kettle of fish – over 400 pages of text, with a lot of illustrations, in a very bulky hardback.
Even though I’m happily recommending it as a Christmas present, I’m going to begin by saying some negative things. This is the “book of the BBC TV series”, which I haven’t seen. On the cover there’s a cartoon image of series’ presenter Stephen Fry, who provides an introduction; but this is a bit of a marketing ploy as the book was written entirely by the series’ producer John-Paul Davidson. I assume the five chapters correspond to five TV episodes, and I have to admit that sometimes there are anecdotes (about things Stephen Fry gets up to) which must relate to things filmed for the series. In effect, this book is the tarting-up of scripts for a documentary series. Also (and here I’m going to be insufferably snooty), some of the book’s research is a bit defective – the type of thing that would go down okay on TV, but wouldn’t survive scholarly scrutiny. Davidson’s chatty and generally informative text occasionally says things that simply aren’t true.
Okay, now I’ve got all that off my chest, here is why I still gladly recommend Planet Word as a Christmas present for adults seeking diversion.
It is very dippable.
I read it from beginning to end, and enjoyed its intelligent structure. Five (long) chapters take us through five general topics viz.
- where language comes from and how it makes human beings unique
- how each language (including dialects) reveals something about a distinct cultural identity
- acceptable and unacceptable language, including euphemism, swearing, jargon, slang and the changing nature of linguistic taboo
- the difference that having and storing a written language makes, including an account of printing and more recent technologies
- language at its highest pitch, in literature but also in advertising, propaganda and persuasion.
Naturally, all of this is broken down into sub-sections and examples, and this is where the dippability comes in. It is great fun to lose yourself in tales of how the Turkana people in Kenya struggle to retain their own language. Or how deaf-mutes can also suffer from Tourette’s Syndrome and show it in the type of sign-language they use. Or what exactly the list of banned words on the BBC used to include – and now includes. Or how Champillion set to work on the Rosetta Stone. Or what good actors feel like when they’re going to play Hamlet and know half the audience will be testing them against other performances of the same role.
In other words, it’s the type of book you can safely put on your bedside table for those last ten minutes before lights out.
[Reid’s Reader will be taking a three-week holiday break. The next posting will be on Monday 16 January]
Posted by Nicholas Reid at 9:02 AM

Email ThisBlogThis!Share to TwitterShare to FacebookShare to Pinterest
Labels: David Veart, DIGGING UP THE PAST – ARCHAEOLOGY FOR THE YOUNG AND CURIOUS, J.P.Davidson, PLANET WORD, Something New