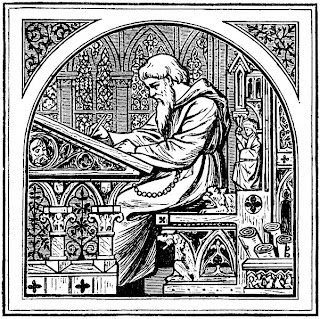 LECTIO SINE STYLUM SOMNIUM
You are perfectly entitled to ask what the poncy Latin words of this week’s heading mean.
Literally and word-for-word they mean “Reading without pen sleep”. The Latin language was pithy when it came to devising mottoes without main verbs in them, so you have to unpack it a bit. When you do, you get something like “If you read without a pen in your hand [to take notes] then you might as well be asleep.”
I read this motto somewhere and jotted it down but (oh cruel irony!) I forgot to take a note of who said it. I think it was a medieval scholar. It might have been Thomas Aquinas. Anyway, I rewrite the four Latin words each month on my desk-pad and they are among my guiding principles.
Lectio sine stylum somnium.
You may have noticed that sometimes, when I mention an older book (as in this week’s ”Something Old”), I refer to my notebooks.
Let me explain.
About twenty years ago, I began the habit of writing in a notebook something about every book I read, from the weightiest and most considerable tome to the veriest piece of formula junk. As I do a lot of reviewing for various publications, I of course keep a copy of every review I write. However I also take notes on what I don’t review, but read for pleasure or for study. So I have a pile of notebooks filled with comments on everything I’ve read for the last twenty years.
This might seem an odd or eccentric habit of mine, and it can be time-consuming. When I read some things, I write quite a lot about them in my notebooks. I might even copy out passages that appeal to me. But I know why I began the habit and I know why I continue it. I simply got sick of the fact that years or even months after reading something, all I would retain of it in my brain would be a vague sense of its meaning and a vague recollection of how I felt about it.
Unless you have an extraordinarily retentive memory, you will find the same is true of you.
I was goaded, too, by a phrase I found in the autobiography of the poet Siegfried Sassoon. He said that turning back in a book serves only to remind us of how much we’ve forgotten.
So even before I’d found the Latin motto, I had a similar insight. If you read without jotting some things down, you will retain nothing much. You might as well be asleep when you read.
There is one obvious disadvantage with this approach, mind. Rather than surrendering to a book, you might find yourself looking instead for things to write about it. Indeed, you might not appreciate it so much as dissect it.
I can remember this same feeling bugging me in the thirty years I was a film reviewer. Sitting in the dark with a pen and pad on my knee, I would jot down things while watching a movie and come home feeling very dissatisfied, as if I had captured fragments of it rather than enjoying the whole. Gradually, I discovered it was better to jot down a whole lot of notes towards a review immediately after seeing a film, rather than while the film was running. That way pleasure was followed by analysis, rather than analysis impairing pleasure.
I think this is the way I now tend to play it with books, though I can’t resist noting page numbers (for interesting quotations) as I read. And if this analytical habit occasionally interrupts the narrative flow of a book, it’s a trade-off I’m willing to make for the certainty of not forgetting the things I read.
Lectio sine stylum somnium.
Posted by Nicholas Reid at 9:00 AM