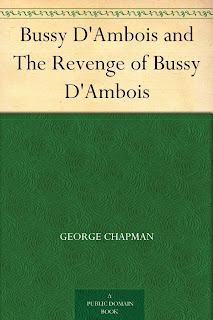 It is odd coming back years later to something one puzzled over in distant student days.
Way back in the early 1970s, when dinosaurs ruled the Earth, I was doing a postgrad  degree in English and I took a paper on Elizabethan and Jacobean drama (excluding Shakespeare, of whom we got a fair whack at all levels anyway). I remember enjoying Marlowe’s mighty line and Jonson’s scrupulous plotting; the worm-gnawing horrors of Webster seeing the skull beneath the skin; the lip-smacking decadence of Ford; the forced pathos of Beaumont and Fletcher’s Maid’s Tragedy; the snarling of Tourneur’s revengers and the genuine oddity of Middleton and Rowley’s The Changeling [if indeed Middleton and Rowley wrote it – apparently scholars have recently reassigned the play to other people, just as they have stripped Tourneur of his plays].
We had a lecturer who liked to remind us that bloodstained Jacobean carve-ups resembled Hollywood films noirs of the 1940s, complete with husband-betraying femmes fatales, hitmen, piles of corpses and cheap theatrical tricks to keep the audience buzzing. The Changeling was his piece de resistance with its plot of a hitman getting it on with the murderous woman who has employed him. Think Double Indemnity and you’re in the right ballpark. This play also allowed the lecturer to indulge in some obvious Existentialist comments, Existentialism then still being trendy in Academe. In the play, one character says to another “Thou art the deed’s creature”. The concept of character being formed by action is, apparently, the essence of Existentialism. I would have thought it was also the essence of platitude, but what do I know? 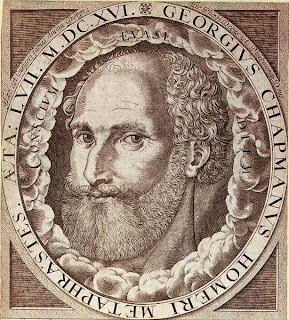 Anyway, in my later memories of this course, there was something that really puzzled me. One of the plays we studied was George Chapman’s Bussy D’Ambois. I remember finding Chapman’s language difficult, but oddly memorable in places. So much so, indeed, that, years later, I could still remember almost word-for-word the opening soliloquy of the title character.
Bussy D’Ambois, an impoverished French nobleman, steps forward and gives vent to this speech:

(Chapman’s reference to cloud-shapes here has led some to suggest he knew the “very like a whale” scene in Hamlet).
In both cases, Chapman can’t refrain from launching into over-long metaphors and similes, developed in more detail than the dramatic situation requires. And, alas, this applies even to what should have been some of the play’s best moments. In Act Four Scene Two, Bussy is quarrelling with “Monsieur”. All the dramatic situation requires him to say is something like “I don’t care what a big shot you become. If you treated me that way I’d still belt you one”. But Chapman being Chapman, he can’t resist getting Bussy to say:
Were your King brother in you; all your powers
(Stretch’d in the arms of great men and their bawds)
Set close down by you; all your stormy laws
Spouted with lawyers’ mouths, and gushing blood,
Like to so many torrents; all your glories
Making you terrible, like enchanted flames,
Fed with bare cockscombs and with crooked hams,
All your prerogatives, your shames, and tortures,
All daring heaven and opening hell about you—
Were I the man ye wrong'd so and provok'd,
(Though ne'er so much beneath you) like a box tree
I would out of the roughness of my root
Ram hardness in my lowness, and, like death
Mounted on earthquakes, I would trot through all
Honours and horrors, through foul and fair,
And from your whole strength toss you into the air.
Yawn!
Shakespeare would have tossed this off as a neat one-liner. (Something like his magnificently scornful “Keep up your bright swords, for the dew will rust them.” in Othello). I’m not saying Chapman was totally incapable of pithy expression. There’s a great line in III i of Bussy D’Ambois where Montsurry describes Bussy as “Fortune’s proud mushroom shot up in a night.” But even so, Chapman suffers badly from that loquacious, pedantic, stiff circumlocution, which I think was called the Euphuistic style.
When I came back to this play after all these years, I looked up John Dryden’s opinion of it [given in an epistle dedicatory which Dryden affixed to one of his own plays in 1681]. Dryden says:
“I have sometimes wondered in the reading what has become of those glaring colours which amazed me in Bussy D’Ambois upon the theatre; but when I had taken up what I supposed a fallen star, I found I had been cozened with a jelly; nothing but a cold dull mass, which glittered no longer than it was shooting; a dwarfish thought, dressed up in gigantic words, repetition in abundance, looseness of expression, and gross hyperboles; the sense of one line expanded prodigiously into ten; and to sum up all, incorrect English, and a hideous mingle of false poetry and true nonsense; or, at best, a scantling of wit, which lay gasping for life, and groaning beneath a heap of rubbish. A famous modern poet used to sacrifice every year a Statius to Virgil’s manes; and I have indignation enough to burn a D’Ambois annually to the memory of Jonson.”
Certainly Dryden goes a little over the top here (and there are always those querulous critics who want to remind us that Dryden’s own plays aren’t so hot in the prolix sententiousness department). But where Bussy D’Ambois is concerned, I can’t help agreeing with him when he speaks of “a dwarfish thought, dressed up in gigantic words” and of “the sense of one line expanded prodigiously into ten ”. Chapman’s play is wordy and ranty and its speeches over-long and sometimes pompous, filled with redundant examples and similitudes.
A poet who is remembered after 400 years deserves some credit, and Chapman really does have his moments. But I think I now know why he no longer holds the stage. Shakespeare, Jonson and Marlowe wrote plays. Regrettably, Chapman wrote long sermons and lectures linked by dramatic situations.
Posted by Unknown at 9:01 AM