Not everything worth reading is hot off the press. In this section, Nicholas Reid recommends "something old" that is still well worth reading. "Something old" can mean anything from a venerable and antique classic to a good book first published five or more years ago.
“THE BEGGARS” by Louis-Rene des Forets (“Les Mendiants”, first published in French in 1943; English translation by Helen Beauclerk published 1948) 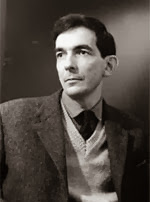 Here’s a story for connoisseurs and bibliophiles. When I was a small boy, I grew up in a house full of books. I became very familiar with the spines and cover illustrations of many books which I never actually read, as well as a number that I did read. In some cases, I also became familiar with the cover-blurbs of books I didn’t read.
When my mother died, I took, and now have on my own shelves, a considerable number of my father’s books. In some cases, those familiar spines of unread books still look at me. Sometimes, when I don’t have other more pressing reading to do, I take off the shelf a book I have known for years by sight, and actually read it. In some cases, it is exactly the type of book that the blurb lead me to believe it would be. In other cases, it is completely different from what I imagined it would be.
Sometimes, when I have finished reading such a book, the impression of the non-existent-and-unread book is still stronger in me than the impression of the existent-and-read book. In such cases, I have the idea (probably fuelled by too much coffee) that the book has existed to ridicule me. Imagine all those years when I was a small boy, crawling around on the carpet; and there it was on an upper shelf, hiding its unread contents between its covers, looking at me down below and knowing how wrong I was.
Here is a case in point.
Louis-Rene des Forets’ The Beggars sat on an upper shelf in my father’s house for all of my childhood. In my mind’s eye, I can see exactly where it sat back then. It has lived on a lower shelf in my own home for about twenty years. I see it was published in 1948, so that’s three years before I was born. Probably Dad got it as a review copy.
On its (now fly-specked) dust-jacket is a very attractive line illustration of people on 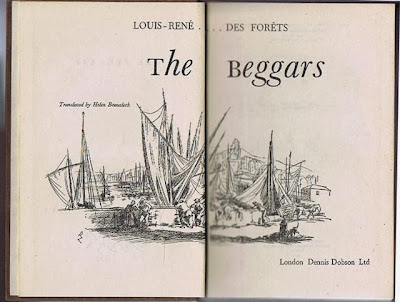 a very traditional-looking quay, leaning over and looking at old-fashioned sailing boats. There is a variant of the image across the title pages. Something on the blurb told me that it was a sort of intellectual adventure story, and comparable with Le Grand Meaulnes. I don’t know why, but I have for years imagined it to be a Joseph Conrad-ish affair, or maybe something like Graham Greene’s first novel The Man Within. Intellectual and connected with the sea.

Anyway, I finally got around to reading it, and it’s nothing like that at all. Set in a non-specific, but vaguely-Mediterranean-ish (or maybe South American) country, it takes place in an old-fashioned sea-port and has a number of discrete and inter-locking stories. There’s a teenage gang involved in petty theft. One member of the gang seems the natural “leader”, but other members of the gang are thinking of challenging him. There’s a group of professional adult smugglers. A lot of it takes place on the waterfront with either the boys, or the adult crims, dodging cops. There’s also the story of an actress in the local theatre – incidentally performing in a production of Othello – wanting to do something about the infidelity of her lover. All relationships seem thwarted or strained. None of the teenage boys seem to have two parents. One of the chief narrators spends his time fending off a brutal grandfather.
There are many first-person narrators, switching from voice to voice and with the narrator here being a background character in somebody else’s narration there.
And, frankly, I found it an almost complete bore.
There is no momentum to it. Individual scenes are vivid, but the whole thing simply doesn’t cohere. I found it difficult to distinguish one narrating voice from the other, although they are meant to be as different as teenagers, a murderer escaped from prison, a woman running an inn, the actress etc. They all sounded the same to me, although in fairness this could have at least something to do with the English translation. I was also irritated by its non-specific setting. Noting that it was written in 1942-43 and first published in France in 1943, I kept seeing in my mind’s eye one of those Occupation-era French movies (“L’Assassin Habite au 21”, “L’Eternel Retour” etc.) which are supposedly set in contemporary France but which are really set in a non-specific fantasy-land because there is no way that French film-makers would be allowed to look at current realities at the time of the German occupation.
Not a book for me, then.
But after I’d read it and reached this conclusion, I did some Googling and discovered a few interesting things.
Louis-Rene des Forets (1918-2000) began to write this novel when he was twenty, in 1938, but he set it aside for war service, was a prisoner of war and was later active in the Resistance. He finished it in six months when he was 24. It was very highly regarded by some critics of the day (including Jean-Paul Sartre and Albert Camus), although the perceptive Raymond Queneau said (and I agree with him) that its multiple narrators were hard to distinguish from one another, and it was “too American” in the sense of being too obviously influenced by the multiple-narrator techniques of William Faulkner. (Queneau was a good friend of des Forests, and did not make the criticism lightly.) Three years later (in 1946) des Forets produced a second and very short novel, Le Buvard, a monologue narrated by a drunkard, apparently something like the monologue novels of Samuel Beckett. He seemed set to be a big literary noise.
But it didn’t happen.
In the 50-plus years of his remaining literary life he produced no more novels, but only one collection of short stories, a book of verse, a book of personal aphorisms and a translation of the correspondence of Gerard Manley Hopkins. Apparently his reputation in France is that of the sparsely-published novelist, very highly regarded by highbrow critics but hardly known to the public. A bit like a French Richard Hughes, maybe. Or maybe that underrates the profile of Richard Hughes. Should I say Henry Green?
Louis-Rene des Forets also (God help him) has a reputation as a precursor of the “New Novel”. Marguerite Duras and Nathalie Serrault both admired his two novels. I came across some pretentious articles that told me his real theme is “silence” and the inability of real communication between individuals. Hence the multiple narrators.
Personally, I wish The Beggars had been an intellectual adventure story of the Joseph Conrad type rather than the evasive thing it is.
It is now back on my shelf, where it will remain unread unless some crazed admirer of obscure French novels happens to be visiting.
Posted by Unknown at 9:01 AM

Email ThisBlogThis!Share to TwitterShare to FacebookShare to Pinterest
Labels: Louis-Rene des Forets, Something Old, The Beggars