I recently finished the task of guest-editing Poetry New Zealand for the fourth time (the relevant issue, Number 48, will be available in March 2014) and, as it always does, the task forced me to consider how I stand with poetry.  I won’t tell you here what conclusions I came to, as it would take too long and I don’t have the energy. But I will tell you one thought that occurred. I wish more poets could write pithily. Could say things meaningfully in fewer words than the rambling rant.
So I decided to devote this week’s “Something Thoughtful” to a few choice pieces of pithiness, not all of them serious. I’ll add minimal comment and just let you enjoy.
First specimen – the 12 lines (less than the length of a sonnet) which Ben Jonson wrote four hundred years ago when his seven-year-old son died. It is a beautiful epitaph. I’ve heard one foolish critic complain that Jonson is an egotistical male chauvinist because he calls his little boy “his best piece of poetry” as if the boy is merely a possession. But – dammit – surely what the professional poet is saying is that the boy outweighs all his work. 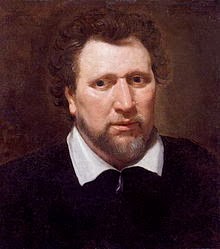 On My First Son
by
Ben Jonson

Farewell, thou child of my right hand, and joy;
My sin was too much hope of thee, lov'd boy.
Seven years thou wert lent to me, and I thee pay,
Exacted by thy fate, on the just day.
O, could I lose all father now! For why
Will man lament the state he should envy?
To have so soon 'scap'd world's and flesh's rage,
And, if no other misery, yet age?
Rest in soft peace, and, ask'd, say here doth lie
Ben Jonson his best piece of poetry.
For whose sake, henceforth, all his vows be such,
As what he loves may never like too much.

Second specimen – also on the death of a child (real or imagined – I don’t remember), William Wordsworth two hundred years ago puts his pantheism into a human frame in the best of the Lucy poems. Eight lines:

No motion has she now, no force;
She neither hears nor sees;
Rolled round in earth's diurnal course,
With rocks, and stones, and trees.

Third specimen – a bit of a cheat this one, as Emily Dickinson takes 24 lines, but when she says something pithily she really says it pithily. It’s not just the unexpected anthropomorphism of calling a snake “a narrow fellow in the grass”, but that line “zero at the bone’ which puts terror into four words.

Resume
By
Dorothy Parker
Razors pain you;
Rivers are damp;
Acids stain you;
And drugs cause cramp.
Guns aren’t lawful;
Nooses give;
Gas smells awful;
You might as well live.

And similarly flippant, but just as much fun, W.H.Auden’s rude eight-line assertion of his personal space:

A “Short”
by
W.H.Auden
Some thirty inches from my nose
the frontier of my Person goes,
And all the untilled air between
Is private pagus or demesne.
Stranger, unless with bedroom eyes
I beckon you to fraternize,
Beware of rudely crossing it:
I have no gun, but I can spit.
Okay, that’s your lot for this week, but if you’re serious about your poetry, see if you can say something as worthwhile in eight lines or fewer.
Posted by Unknown at 9:00 AM

Email ThisBlogThis!Share to TwitterShare to FacebookShare to Pinterest
Labels: Saying It Pithily, Something Thjoughtful