I have just been considering Carl Shuker’s novel A Mistake, and I have seen an interview Shuker gave to the New Zealand Listener’s Diana Wichtel (NZL 9 March 2019) in which, very incidental to talking about his new novel and his writing career, he excoriates reviewers for the negative things they said about a novel written by a friend of his. Later Wichtel jocularly refers to Shuker as the “scourge of reviewers”. Okay, authors will always be in tension with reviewers – its part of the reality of publishing and reviewing. But just to make it clear that, as one of those pesky reviewers, I’ve taken Shuker seriously since his first novel appeared, I’ve decided to display here reviews I wrote of his first two novels. 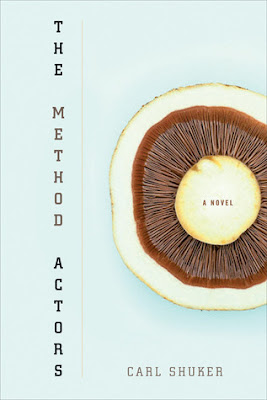 The following review of Carl Shuker’s The Method Actors appeared in the Sunday Star-Times on 18 September 2005. Apparently to provide room for a large photograph of Japanese people in the street, parts of the review were cut. On the whole, this didn’t make much difference to its meaning. But the loss of the second-to-last paragraph changed considerably the impact of my review. I produce below the review as I wrote it, putting in bold and into square brackets those parts that the newspaper edited out. Two things I regret – that I didn’t try to explain the title The Method Actors, and that I didn’t say something about the part of the novel that,  for some reason, has lingered longest in my mind – the section in which an elderly Japanese finds ways of pretending that Japanese atrocities (in the 1930s) in China never happened.


[Up on the northern side of the Pacific, the islands and people of] Japan will always be [something of] a challenge to most of us New Zealanders. We share the same ocean, we trade, [we gulp down much of the same media culture], and hordes of us each year play tourist in each other’s country. Maybe we think we actually know each other. Still, there’s this impenetrable gap between our cultures. Westerners can live in Japan for years, and still not get a fraction of the nuances of local life and customs.


It’s this sense of foreignness and alenation that is caught most startlingly in this accomplished debut novel.


Carl Shuker follows the lives and thoughts of a group of young gaijin (foreigners) and Japanese in modern Tokyo. [There is a linear plot of sorts.] Meredith, daughter of a dodgy New Zealand judge, is in search of her brilliant but erratic brother Michael. The novice historian Michael was in the midst of an investigation into Japanese war crimes when he went missing. As she searches, Meredith’s discovery of the Japanese past and present is counterpointed with viewpoints radically different from her own. They include Yasu, a young Japanese who cultivates hallucinogenic mushrooms for druggie tourist, the Frenchman Jacques and the Chinese-American Simon Chang, whose Chinese views on the Japanese are informed by a long history quite different from that of Westerners.


The novel’s blurb claims that it “leaps effortlessly from character to character”. [But] this isn’t quite true. [There are times when] the narrative voices sound too similar and its quite an effort to recall which narrator we are meant ot be following. Even so, the variety of personalities finally convinces.


[And, more than linear plot, there’s that ] pervasive sense of cultural dislocation. It’s signalled by a sort of running gag in which Shuker keeps cutting back to the inept essay a student is writing on Shakespeare’s Twelfth Night, a play in which a brother and sister are shipwrecked, like Meredith and Michael, in a strange foreign country.


Shuker paints an environment in which young Westerners (language teachers, exchange students, businesspeople) wander, blank-eyed and alien, through Japan’s neon-lit streets, looking for anything to hang on to. Divorced from their roots, they grab sex and drugs as meaningless diversion. Language is telescoped into a vaguely familiar international babble (mushrooms are always “shrooms”, air-conditioning “aircon”, Japanese women “J-girls” and so on.) [And pop-culture references are the international lingua franca.] Dialogue bristles with allusions to Hollywood movies, rock songs and cult TV series. But what they all mean to young Japanese is not necessarily the same as what they mean to alienated young New Zealanders.


This can be a difficult novel. I could have wished to lose some of the glibness of later chapters, where Meredith meets a Japanese sage, and he discusses in detail the bloody expulsions of Christians and Westerners from Japan three hundred years ago. This seems a way of rounding off and preaching about otherwise unresolved issues of Japanese historical violence. Occasionally, too, I found the 500 closely-printed pages a long haul. Yet in the end the fine and copious detail is part of Shuker’s conscious method.


[ Is this the best novel a New Zealander has ever written about Japan? I’m not enough of an expert in the field to make that call, but I’d be surprised if it isn’t. Is Shuker’s ultimate message the unknowability of a foreign culture – like E.M.Forster renouncing English knowability of India in A Passage to India? Perhaps. That such a comparison is worth making is an indication of the worth of The Method Actors.]


[This is a densely-written, ambitious, demanding novel.] If Carl Shuker goes on as he has begun, he has a formidable literary career ahead of him. 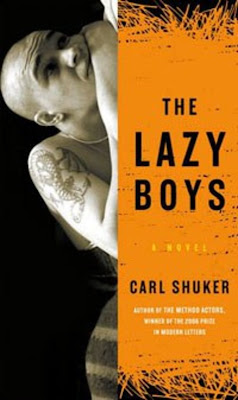 The following review of Carl Shuker’s The Lazy Boys appeared in the Dominion-Post 28 October 2006. It is reproduced here unaltered from the way it appeared in the newspaper, though I can note that one sentence, in which I referred to a then-topical murder case, was edited out. Yes, I was less impressed by it than I was by The Method Actors, but that doesn’t mean I denied its authenticity. Shuker’s recent interview with Diana Wichtel suggests it has at least an element of autobiography.


Before you can really get into Carl Shuker’s second novel, there are a couple of awkward things that have to be negotiated. First, there are six pages of underpunctuated James Kelman-esque stream-of-consciousness drunken rave, the thoughts of a student far gone on the piss. Six pages is about the limit that this sort of thing can stand.


These terrors negotiated, you can more or less see where the novel is going.


The year is 1994. (It must be, because there are two or three references to the death of Kurt Cobain). Richard Sauer is an eighteen-year-old first-year student at Otago, rapidly going to pieces. He’s spent up large from his student loan and allowances, mainly on booze and drugs. His credit card is running out and he is unacquainted with lectures and course-work. He’s just been kicked out of a student hostel for drunk and disorderly behaviour and the proctor’s office is chasing him on a sexual harrassment charge after an incident at a party.


So he goes home for a while to Timaru, to cool off at Mum and Dad’s.


But it’s boring there. There’s nothing to connect with.


So he smokes and drinks and masturbates and beats up the family’s pet dog (literally) and nearly sets fire to the place.


Whereupon he returns to Dunedin, moves into a grotty student flat and the pattern continues as before. He smokes, drinks, masturbates etc. Only now he starts reading books about alienated serial killers who have carried out luridly sexual murders. And he sees how psychologically similar to him they are.


The cover blurb compares the novel with A Clockwork Orange (no way) and Less Than Zero (maybe). At least the idea of self-destructive nihilism is there.


But oddly enough I found myself comparing it with Camus’s L’Etranger because of a peculiar problem Shuker creates for himself. It’s that first-person (and in this case mainly present tense) narrative voice.


Like Camus’s improbable hero, Richard Sauer tells his own story and there are times when he is just too articulate and self-aware about his condition. In other words, the author turns puppet-master and makes him a mouthpiece for his own thesis.


As a rubbing-your-face-in-it presentation of student grot, grunge and sleaze, this works. But though it shares a theme of role-playing, it is not the complex, imaginative thing Shuker’s stimulating Prize in Modern Letters-winning debut The Method Actors was. And I admit to finding very irritating Shuker’s habit of leaving out bits of conversations with rows of dots, thus “…..”
Posted by Nicholas Reid at 9:01 AM

Email ThisBlogThis!Share to TwitterShare to FacebookShare to Pinterest
Labels: Carl Shuker, Something Old, The Lazy Boys, The Method Actors