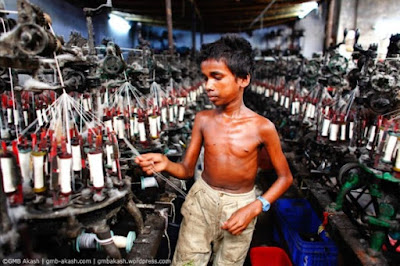 Not too long ago, I was hanging out the washing when my eye was caught by the label on the collar of one of my shirts. It said “Made in Bangladesh”. At once my heart was pierced by the arrow of guilt. Bangladesh? Didn’t that mean that my shirt was produced in some appalling sweatshop where child labour was exploited and workers were paid a pittance? The very name evoked all the images we have seen so often on TV documentraies about Asian wage-slaves, slums, child prostitutes and callous international corporations who make millions out of misery.


Of course, all the counter-images kicked in too. Perhaps my shirt was produced in some ethically-designed factory (there are some) whose employees were paid decent wages. Perhaps there was some truth to the neo-conservative argument that entrepreneurship always begins messy and exploitative, but this is a necessary stage societies go through before humane captalism can emerge. Even so, it was the negative images that dominated, and the existential distance between me – middle-class Western consumer – and the impoverished people who probably made the shirt.


In an earlier post called Confessions of aHeartless Capitalist Exploiter, I’ve touched jocularly on the matter of Westerners taking advantage of Asian traders and producers – but that post concerned a very brief visit to Shanghai, and China is now a country more in the exploiting than the exploited mode, with a growing state-controlled capitalist, profit-based economy. But Bangladesh? That is a different matter. So there was a real twinge of guilt.


All of which brings me to the questions I pose today.


How much guilt should we feel about enjoying the fruits of the labour of people far more impoverished than we are? Are we, in effect, like new versions of those people who once lived comfortably off the slave trade?


My part in the cycle is a very small one. I bought the shirt from a New Zealand retailer who, presumably, has to honour New Zealand labour laws about wages and conditions owed to employees. As a consumer, I didn’t directly exploit anybody in buying my shirt. But (assuming my shirt was made in the worst conditions I have imagined), doesn’t this still make me part of the general pattern of exploitation? Somewhere before the shirt reached me, it would have had to be bought by an importer who profited directly from underpaid workers. At this point, I think,  left-wing people would start talking about systemic exploitation and – as they always do – would neatly by-pass the problem of individual guilt.


But here is the problem. Are there not degrees of guilt? There is a big difference between somebody who knowingly and directly exploits and underpays workers, and somebody who has no conscious role in such exploitation. This is not an argument for blissful ignorance, where I base my innocence on conveniently “not knowing” how the system works. Once we are adults, we have a duty to find out as best we can how the world works. But it is an argument for recognising that guilt is a relative thing. If, as some ideologues say, guilt is a systemic and general thing, then we are all guilty. And if we are all guilty, then nobody is guilty.


Let me give you an example of how the idea of collective guilt can work – and can quickly become very dishonest. In occupied France during the Second World War, at most about 2% of the population were involved actively in the Resistance. That is quite a number of people when you think about it, given the dangers involved; but it is still a small proportion of the population. The overwhelming majority of the population did what people in all occupied countries did. They didn’t like being controlled by a hostile force, but they kept their heads down, went about their daily business, and just hoped these horrible times would pass. And then there was a small minority who actively helped the occupying force – joining paramilitary groups who assisted the Nazis in rooting out resisters, joining the Waffen SS, coordinating round-ups of Jews etc. After the war was over, such active collaborators would sometimes use the face-saving slogan “Everybody Collaborated”. They meant that those people who didn’t actively resist were also collaborators, because they kept society running under occupation. This was a claim of collective guilt. But there is no way that I can see a teacher or postman or truck-driver going about his business under such conditions as sharing the same guilt as a French volunteer for the Waffen SS.


And there is no way that I can see a Western consumer buying a shirt as sharing the guilt of an exploiter of underpaid women and children.


Guilt has its limits. The idea of collective guilt can be a neat avoidance of individual responsibility. But we still have a duty to understand how the world works.
Posted by Nicholas Reid at 9:00 AM

Email ThisBlogThis!Share to TwitterShare to FacebookShare to Pinterest
Labels: Limitations of Guilt, Something Thoughtful